City's War on Musicians has one less tool 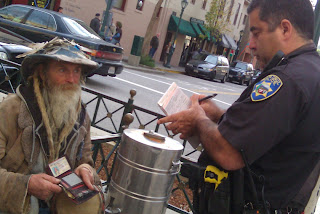 Robert "Blindbear" Facer, an Amish street minister, is issued a $445 citation for "unreasonably disturbing noise" when he kept a 31-year old nearby resident from napping. Jan 6, 2010 Photo by Becky Johnson

NOTE TO READER:  Can u imagine? The LAW that I was convicted under for singing a few songs in the middle of the afternoon in my unamplified singing voice in the FREE SPEECH ZONE no less!! has been found by a Judge OUTSIDE Santa Cruz County to be "unconstitutional"? Surprise. Surprise. Surprise. What's next? Will the City seek the courts to expunge my conviction? Will they refund the $250 of community service I performed? An apology? Or will they just find another way to drive activists and musicians off of Pacific Ave.? ---Becky Johnson, ed.

SANTA CRUZ -- A federal judge has thrown out a portion of Santa Cruz's noise ordinance and ordered the city to stop enforcing it.

The judge found the ordinance -- which bans noise that is "unreasonably disturbing or physically annoying" or "not necessary" to participate in lawful activities -- is vague and "fails to pass constitutional muster." The judge said determining what level of noise is necessary is subjective.
Hampsmire filed suit in the Northern District of California, San Jose Division, in ﻿May.

"I certainly think the city should have a noise ordinance, but the ordinance needs to be clear and measurable," said Mike Millen, a Los Gatos attorney who brought the claim and said he has represented Hampsmire when officers elsewhere have asked him to quiet down.

The judge denied Hampsmire's claim that his free-speech rights were violated and found no evidence that the arresting officer acted out of an objection to the man's religious speech.
The case will go to trial unless the parties settle. Millen said he will seek payment from the city for his legal fees, which he estimated at $40,000.

City Attorney John Barisone said the ordinance has been upheld a number of times in state courts, adding, "This is really the first time a judge has had a problem with the language in our law." He said he will work with the City Council to amend the ordinance for clarity.

The judge's order does not affect other parts of the city's noise ordinance, including barring loud noises from 10 p.m. to 8 a.m. Deputy Police Chief Steve Clark said the ruling also does not affect the ability of officers to cite or arrest people whom they believe are using noise to disturb the peace.

Hampsmire was preaching on the sidewalk on Pacific Avenue at Cooper Street about 6 p.m. on a Sunday when a man in an office about 70 feet away complained to police about the loud noise, saying Hampsmire had been speaking for about an hour, according to a court record. Officer Patrick Bayani responded and determined Hampsmire did not need to be so loud, even to be heard across the street, and asked him to move or reduce the noise.

The officer said Hampsmire refused and told him "You're going to have to arrest me for preaching ... for my freedom of religion," according to the record. The man began preaching even louder after handing his belongings to a woman who was videotaping the incident.

Hampsmire was booked into jail for disturbing the peace and later released, the record said.

The city used the ordinance in 2010 to prosecute advocates for the homeless who sang in protest outside Bookshop Santa Cruz, which is owned by the family of Councilman Ryan Coonerty, a vocal critic of aggressive panhandling and other social problems downtown. The city attorney said Friday's ruling can't be applied to previous cases.

Police have issued 121 citations using the rule since 2011, according to city records.
Posted by Becky Johnson at 2:35 PM