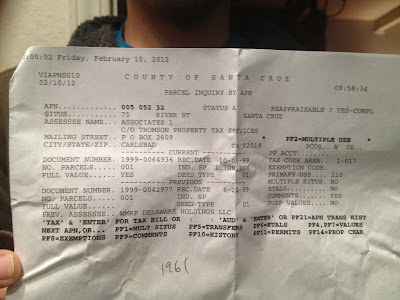 Santa Cruz, Ca. -- I appeared for my 4th time in Judge Ariadne Symons court today. Today's 8:15 A.M. appearance was my 3rd to appoint a public defender. Apparently this was too much for Judge Symons, and she ordered me to appear Friday, March 9th At 8:15 A.M. That's four public defenders so far who have turned down my case claiming a conflict. Am I unrepresentable?

I told Ms. Symons that these pending charges are denying my ability to earn a living and I am eager to get before a preliminary hearing to clear my name, and that a perfectly willing and able Public Defender was in court on Friday, March 2nd, ready to take my case and that I believed he is still willing to take my case.

Who can suddenly come up with $5000 in spare cash just to stay free from jail? No poor person I know. But $5000 is nothing to the 1%. The building I'm accused of occupying belongs to the 1%. Wells Fargo merged with the Coast Commercial Bank four years ago, and only Wells Fargo's branch office remains. The empty hulk, now with Wells Fargo holding the lease, has been sitting empty since then. And with an asking cost of $28, 790 per month, its not surprising that no one has rented the place. In fact, I wonder how long ago it was that an agent even showed the building to a prospective tenant. And this while four people died of hypothermia in Santa Cruz in 2011.

It will cost the public hundreds of thousands of dollars to try the 11 of us. Few of us had anything to do with the occupation of 75 River Street, a long-empty bank building. I, myself, never entered the building, but stood on a sidewalk in front of the building, holding a sign at one point.

I have long opposed allowing these empty commercial buildings to sit vacant for years at time right in the middle of our commerce center. What is the land-use policy that allows this? I'm certain that the engine driving this phenomenon is tax write-offs for "lost" rental income.

Does Wells Fargo write off $28,790 a month so it doesn't have to pay taxes on profits elsewhere in their portfolio? And who is the victim of such a policy if not the citizens in Santa Cruz who must live in a community that LOOKS blighted by dozens of empty buildings downtown, with an unusual percentage being empty banks.

We need a policy that taxes empty properties. We should not, as a community, allow these corporations to wharehouse empty properties for years at time, with "rents" so far above the market-rate that no pesky tenant will opt to rent the place, and leaving our community look like it's in the middle of the Great Depression.

As for the prosecution of the Santa Cruz 11, can DA Bob Lee's prosecution be MORE politically motivated?
Posted by Becky Johnson at 10:47 AM No comments: