Judge Gallagher: "Sleeping is not a constitutionally-protected activity" 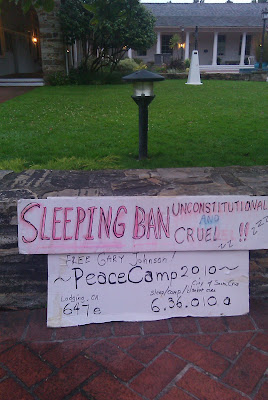 On August 29, 2010 two protest signs displayed as part of Peace Camp 2010's protest against the Sleeping Ban, at Sana Cruz City Hall. At the time, Gary Johnson was in jail in solitary confinement and on a hunger strike after having been arrested for illegal sleeping. Photo by Becky Johnson.
UPDATE JAN 27 2011--Ed Frey informs me that the Gallagher decision will be appealed. The trial for the Peace Camp Six has been rescheduled for April 25, 2011.---- ed 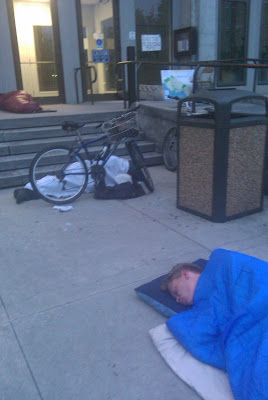 Not all defendants appeared in court. Unofficial spokesman for Peace Camp 2010, CHRIS DOYON was conspicuously absent from the proceedings. Attorney, ED FREY, admitted he had no idea why Chris wasn't in court, but, informed Judge Gallagher that "Mr. Doyon lives in a very rural area in north county and has no telephone." No warrant was issued,

July 10, 2010, Peace Camp 2010 has grown to 20, and no one has yet been ticketed. People are getting a good night's sleep while sleeping safely in numbers on the courthouse steps. Photo by Becky Johnson

but Gallagher ordered Doyon to physically be present at the next appearance.

At issue is the untested, misdemeanor 647 (e) State anti-lodging law which prohibits 'lodging' (which is undefined) anywhere within the entire State of California! If the DA is serious about making these charges, why are cities and counties all across the state not trumpeting how the Santa Cruz District Attorney has found the cure for homelessness? Arrest and jail them ALL! Now!

Therein lies the conundrum. If every homeless person, who lacked a deed to property, a home mortgage, a lease, a rental agreement, or at the very least, a motel room receipt, were arrested, our jails would explode. With a cost of about $65,000 per inmate per year to keep a person in jail, we could afford to house every homeless person in America in a 3 bedroom home instead.

Does the State of California really expect police and sheriffs to arrest every homeless person and traveler on the spot, jail them, provide a defense attorney if they are too poor (and they ALL are too poor), and jury trials for each charge. Is this the world DA Bob Lee wants to bring about? Arresting and jailing EVERY homeless person and out of state tourist minus a motel receipt?

Furthermore, Santa Cruz County Sheriffs appeared to only enforce "lodging" charges if a person was sleeping. Does "lodging" = "sleeping?" And how can sleeping be illegal?

ED FREY, several of the Peace Camp Six defendants, including COLLETTE CONNOLLY, ARTHUR BISHOFF, ELIOT ANDERSON, and GARY JOHNSON appeared in court at 1:30 PM as demanded. However, Judge JOHN GALLAGHER was nowhere near ready. He was still going thru his arraignment calendar and several people had been there all day and still were not done.

DAN COYRO, photographer for the SENTINEL asked Gallagher about his motion for permission to make recordings for broadcast. Gallagher said that he wouldn't deal with that matter "until about 4:30 or so. No. More like 4PM. " Coyro asked if he would be allowed to make a recording then. "I'll deal with that matter when I call the case." Coyro left and never returned.

"Shall we return at 4PM then?" asked ED FREY.
"You're welcome to leave and come back," Gallagher stated, "but you have to be here when I call the case." This meant all lawyers, defendants, reporters, supporters, and witnesses needed to hang around (or leave) until sometime indeterminate before or after 4PM. Gallagher then launched into his rote speech proclaiming how his role is " to serve the public."

Neither COLLETTE CONNOLLY nor ARTHUR BISHOFF would be sleeping in the shelter that night. Both had missed the 3:30PM line up at the Homeless Services Center for a bed that night. Both would be illegally "lodging" in order to comply with Gallagher's whimsies.

ED FREY asked GALLAGHER for permission to have an official recording made of the hearing.
"It IS being recorded by the court's recording system," Gallagher told Frey. He acted as if this was a regular or usual practice. Very different from JUDGE PAUL BURDICK's claim that "requests for permission to record must be made in writing 5 days in advance of the hearing." What IS the court policy on making recordings? Is it usual in GALLAGHER's court and forbidden in JEFF ALMQUIST's court? How can this be so arbitrary and capricious?

FREY asked GALLAGHER to take judicial notice for three items. The first was the statement that the courthouse steps and the City Hall grounds are "a place traditionally used for pubic protest."

At first GALLAGHER fought granting the notice. "I've lived in this county 32 years, and if I had to say for a fact, I'd have to say "no". FREY argued "MIKE ROTKIN spoke from the steps of the County building just a few weeks ago in a demonstration led by the SEIU. SAM FARR spoke here to hundreds. I've been through thirty at this location myself," Frey countered.

DA SARAH DABKOWSKI weighed in with "Judicial notices are irrelevant, and does not go to the argument."
"I'm granting your request for judicial notice number one," decreed Gallagher.

FREY: "The second request for judicial notice is "the defendants purpose was to protest the Sleeping Ban."
GALLAGHER: "I'm denying that request."
FREY: "The last request I have is this "It is safer to sleep in groups than by yourself."
GALLAGHER: "Denied."

Ed moved on to make his opening arguments. "The ninth amendment has hardly ever been used" but "the purpose of the 9th Amendment, according to the author of the Bill of Rights, is to make it clear that the rights of the people are not limited to those which have been enumerated."

FREY: "For instance, the right to breathe is not in the Constitution. In fact, if we were to try to list all these rights, we'd quickly find they are too numerous to mention. And the right to sleep has to be one of these unenumerated rights, as long as they don't impact anyone else' rights."

Gallagher put forth that the Constitution "protects political rights but not physical rights."
Frey contended that the 9th Amendment is meant to be "extremely broad, where the people retain the rights to do anything they want as long as they don't violate anyone else rights."

FREY: "Our second set of rights lie under due process of law. The law we're dealing with outlaws "lodging" any time or place, with no limitations whatsoever. "Lodging" is not defined. A person has no way of knowing what is prohibited."

FREY: " Lodging as it's always been interpreted has to do with some structure. Lodging in a house or trailer. A person sharing a room with the owner of a house can be called "a lodger." The other definition of "lodged" is such as when an object gets "lodged" between two rocks, but I don't think that is the meaning that was intended."

FREY: "How is a person to know what they can or can't do?" And under our lodging laws, involving tenants, you can't be ousted by police unless you've been given a 7-day notice."

FREY: "If I was just sleeping in front of the courthouse, I'm not a lodger. We have no contract. We just came and slept. We don't think we are lodgers and so the law doesn't apply to us. Sheriff's and police have no guidelines on how to enforce this ordinance so they don't know who is breaking the law and who isn't. This leads to arbitrary and selective enforcement."

"Why should any place be unprotected?" Gallagher asked.
"What we need are reasonable guidelines. The people have a right to be here, the right to remain here. If a person is homeless, he resides anywhere he is found until he leaves." Frey argued that the Ninth Amendment is "not just pretty sounding words." 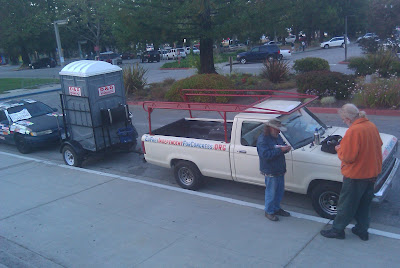 July 4th 2010, Ed Frey (in orange) totes a porto-pottie to the steps of the Santa Cruz County Courthouse to provide hygienic services and begins Peace Camp 2010, a protest against the Sleeping Ban. Photo by Becky Johnson
DISTRICT ATTORNEY DABKOWSKI CONFLATES "LODGE" WITH "LIVE" WITH "SPEND THE NIGHT"

DS Sarah Dabkowski decried Frey's "unprecedented request" and that there is "no law which supports his untimely request." She argued that 647 (e) is not vague. "It does put people on notice. I does have sufficient definite guidelines for law enforcement. To 'lodge' somewhere, it's common knowledge. To lodge, live, stay the night, where they don't have permission."

"A person coming up the courthouse grounds at night should ask, what is it I can do here? I can't file a court case right now since the court isn't open. And I should know that no person gave me permission to sleep here."

"There is no ninth amendment right here. There is no "right to sleep." Sleep may be a need and we're not unsympathetic to the plight of the homeless. But there is no Ninth Amendment violation in this case. Nor in the California State Constitution either."

"When the DA says there is no law which enforces our notion that the 9th Amendment grants us a right to sleep, it is saying that if you are so poor you can't afford a motel room, you can't sleep. And that is legally and morally reprehensible."

"I'm going to deny the motion to dismiss," Gallagher ruled. "Sleeping is not a Constitutionally protected activity. I am not unmindful of plight of homeless people. But I don't think it was the intention of those who drafted the Bill of Rights to allow people to sleep on ANY public or private property without permission. They did not envision an ingrained "right" to sleep anywhere they wanted."

"The Constitution elucidates political rights, not activities meant to support human functions. The people who wrote the Constitution did not intend it to allow the right of the people to sleep anywhere they wanted."

So now the DA and the Peace Camp Six are slated to go to a jury trial beginning on January 31st. If found guilty, the sheriff's can begin arresting and jailing the estimated 2200 homeless people in Santa Cruz County immediately. Let the Gulag's begin.

Posted by Becky Johnson at 6:10 AM