Bruce Bratton weighs in on the Santa Cruz Eleven

NOTE TO READER: Longtime columnist, Bruce Bratton wrote for the SENTINEL, then the Goodtimes, and finally Metro Santa Cruz. When that ended, Bratton chose to go online and post his columns where anyone with a computer connection could read them. He was a blogger before the word "blogger" had been invented. In this weeks edition, Bratton has weighed in on the Santa Cruz Eleven, and while promoting the July 1st fundraiser at India Joze, has some sharp words of criticism for DA Bob Lee.  ---- Becky Johnson, SC 11 defendant 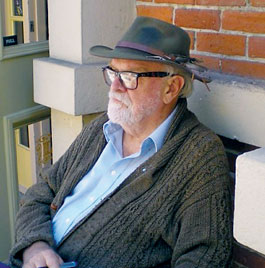 Bruce Bratton while a columnist
for Metro Santa Cruz

SANTA CRUZ 11 FUND RAISER. There’s going to be a fundraiser for the SC11 & Desiree Foster at INDIA JOZE starring RICK WALKER & TOM NODDY. The Santa Cruz Eleven are local community members who have been charged with an unprecedented variety of offenses arising from their alleged involvement with the occupation of a long-time vacant bank building late last fall, 2011.These defendants are either journalists, members of our local press, and/or activists supportive of the Occupy movement.

The Santa Cruz Eleven defendants were participating in constitutionally protected activities either as news gatherers, observers, or as supporters, including a mediator between police and activists inside the occupied building. Hundreds of individuals, if not more, entered and exited the bank building during the 75-hour occupation, including local elected officials, corporate press and “citizen journalist” bloggers.

Only the Santa Cruz Eleven have been charged, scape-goating those few who’re recognizable to police who never conducted an investigation of who actually broke into and/or damaged the building. http://santacruzeleven.org/about/

India Joze and the co-defendants are hosting this community gathering to bring awareness to the SC11 and to help out Desire Foster who is experiencing financial hardships. Grant Wilson says “Desiree Foster is the youngest person (of the SC-11) charged with 2 Felonies she’s 19 yrs old. She has been caring for her mother – diagnosed with a serious form of cancer.

If that wasn’t enough trauma for a 19 year old, in early February, without any advance notice, Desiree was arrested in her mother’s home, handcuffed, taken to jail & later released on $5000 bail*. As a result, Desiree tried unsuccessfully, to commit suicide.

Once again, it makes me deeply question the ethics & motives of District Attorney Bob Lee. You would think that a good District Attorney, anywhere in the country, would be focused on confronting and reducing suffering and crime in their community. But, in this situation, it seems as though there’s a serious miscarriage of justice. Our DA is, in fact, causing suffering!


* While Foster was initially held on $5000 bail, after 9 hours she was released on her own recognizance without explanation
Posted by Becky Johnson at 11:15 AM