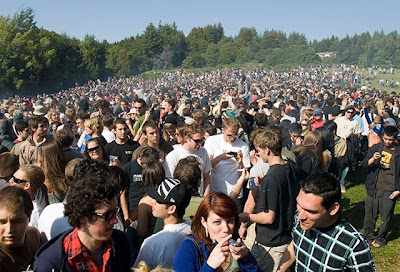 The Jim Crow laws were state and local laws in the United States enacted between 1876 and 1965. They mandated de jure racial segregation in all public facilities, with a supposedly "separate but equal" status for black Americans. In reality, this led to treatment and accommodations that were usually inferior to those provided for white Americans, systematizing a number of economic, educational and social disadvantages.- Wikipedia

Across the country hate speech about marijuana and medical marijuana is not just fashionable, it is the law.

While prominent examples abound, perhaps the most glaring is the resurrection of Jim Crow in Los Angeles through regulations that essentially entrap every single dispensary in the city. These laws declare medical marijuana patients and providers to be undesirable and second-class citizens in every conceivable way, even to violating their 1st Amendment right to peaceably assemble through prohibiting "consumption on premises".

Santa Cruz could very well have been the leader in enshrining prejudice and intolerance into law with its ordinance, passed in 2000, that purported to regulate "medical marijuana association dispensaries".

What the ordinance did was to prevent any medical marijuana dispensary from opening for 5 years, until nearly 10 years after the passage of the Compassionate Use Act of 1996. It accomplished this primarily through zoning prohibitions which banished medical marijuana dispensaries to the fringes of town - to the "colored section" - and through draconian restrictions and an arduous approval process.

This kind of institutional resistance to the will of the people has spread like a California wildfire, until now we have Los Angeles resurrecting Jim Crow by prohibiting medical marijuana dispensaries within 1,000 feet of a school, public park, public library, religious institution, licensed child care facility, youth center, substance abuse rehabilitation center, or any other medical marijuana collective(s), as well as abutting or across the street from a residence. It banishes them to the "colored" section of town, as pioneered by Santa Cruz way back in 2,000.

One of the best replies I've seen to the inflammatory and prejudiced reporting concerning medical marijuana dispensaries was from Marc Whitehill of Boulder Creek Collective.

Boulder Creek is a funky mountain town about 10 miles north of Santa Cruz. Santa Cruz is world famous as the home of The Wo/Men's Alliance for Medical Marijuana (WAMM) and occupies the position in the popular mind of Compassion Central, USA.

On 16 Jan 2010 the Santa Cruz Sentinel published an article with the blaring headline "New Boulder Creek pot shop tests community will, county law". Most people wouldn't think twice about that headline, but Marc Whitehill found it defamatory and did an excellent job of stating why. In a comment to the article he began his objections with the following:

The article title, "New Boulder Creek pot shop tests community will, county law" is unnecessarily inflammatory. It is not our intent to test anybody and we are not a "pot shop."

Mr. Whitehill is absolutely correct. It is hate-speech and it is inflammatory; yellow journalism pure and simple, and typical of not just Santa Cruz but pretty much everywhere else.

During its hearings on medical marijuana dispensaries the City of Santa Cruz Planning Commission first whined "It's so new," completely oblivious to the fact that Proposition 215 was passed fifteen years ago and that it was now ten years since the city first enacted ordinances regulating "medical marijuana dispensary associations". Then, upon displaying a disturbing ignorance of medical marijuana (not to mention a blatant prejudice against it along with absolutely no consideration of the needs of patients) they refused to listen to anything Valerie Corral of WAMM had to say.

When the Santa Cruz City Planning Commission voted 7-2 to recommend approval of the moratorium and to limit the number of medical marijuana dispensaries in the city to the two existing, one of the excuses it used was that 50% of the clients of these dispensaries were from the County of Santa Cruz but not the city.

Prior to these meetings regarding a moratorium and limit on medical marijuana dispensaries by the City Council and Planning Commission, the City enacted a smoking ban including the sidewalks and parking lots of city hall. This was obviously intended to prevent medical marijuana patients who need to medicate every couple of hours from participating at the meetings.

The Planning Commission voted 7-2 to approve a moratorium and limit the number of dispensaries in town to the two existing. On 26 Jan 10, the Santa Cruz city council voted to extend the moratorium on medical marijuana dispensaries and production houses a second time, for 4 months and 15 days.

Of the two applications to open a dispensary that were completed and submitted, one has been withdrawn. It appears the extension of the moratorium was deemed necessary, in part, to discourage Stuart Kriege, the remaining applicant. It is not known if he has been paying rent on space since June, when the moratorium was initiated. An article published in The Santa Cruz Sentinel on 31 Jan 10 regarding the extension of the moratorium noted that Kriege refused to be interviewed by them.

He must have read the hatchet job they did on Boulder Creek Collective.