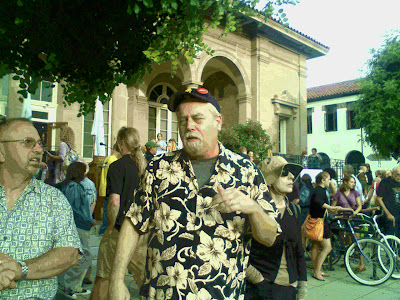 Photo: Citizen Fitmaurice attends the 2oth anniversary remembrance of the October 17th, 1989 Earthquake in front of the Santa Cruz Post Office. Fitzmaurice was on the council in 2000 when the original medical marijuana dispensary ordinance was written. Photo by Becky Johnson
by Becky Johnson
January 31, 2010

Santa Cruz, CA. -- What's up with "marijuana-friendly" Santa Cruz? Five years after Prop 215 passed, the Santa Cruz City Council passed an ordinance to regulate dispensaries. Five years AFTER passage, and TEN YEARS after passage of Prop 215, the first dispensary, Greenway, opened. Since then, two other dispensaries have opened. One opened in the downtown area, but was shut down by the City in less than a month. The second, opened with permits and is still in operation. That's two dispensaries, and both are doing a brisk business. In cash-strapped Santa Cruz, many have thought of regulating and taxing marijuana as a way to boost sagging budgets. But few who are thinking along those lines actually hold a seat on the City Council.

And this, despite clear indications in February by the Justice Department, that the DEA would no longer enforce marijuana eradication efforts in States which have legalized such activities. On October 19, 2010, Attorney General Eric Holder put it in writing. So why the delay?

The Santa Cruz Sentinel published news of the desire to extend a moratorium on new dispensaries by the planning department in an article by J.M. Brown entitled "Santa Cruz medical marijuana advocate urges city to rule on plan for new dispensary" on January 31, 2010 tells the tale of Stuart Kriege who completed his application to open a medical marijuana dispensary on the West Side of Santa Cruz. After 8 years of the intractable Bush Administration leaving in its wake arrests, crop seizures, and an array of charges or just seizures, the cannabis friendlies sensed that change from the Obama Administration would result in a less prohibitionist mentality. However, that is all that applicant Kriege was experiencing.

"Despite Kriege's plea, the City Council unanimously extended the ban for four months and 15 days so planners could verify whether there was a need for additional dispensaries. A city survey found a quarter of buyers at the existing clubs live outside Santa Cruz County."

Now one can wonder at how the City managed to survey pot buyers. People are disinclined to give their home address, and the information given to the provider is confidential. And since when has the City been concerned about visitors coming from outside Santa Cruz County to our environs to buy any other product? How would City Planners determine if there was a need anyway? People again, in an atmosphere of criminalization of selected substances, are unlikely to volunteer what their future marijuana buying habits are likely to be. And haven't City Planners had enough time already? At what point does a delay become a de facto ban?

"Council members also want planners to ensure Kriege's proposed shop and the two local clubs meet state and local regulations, including operating like nonprofit organizations."
Again, this is puzzling. The ordinance written in 2000, does provide minute detail for operating a dispensary. Two centers are currently operating, presumably within State and local laws, and structured as non-profits, so why the confusion? And why do we even PAY these planners? They sound like speedbumps. Costly speedbumps.

"the City Council has to weigh expanding legal access to pot at a time of increasing anxiety about drug- and gang-related violence."
So irrational fear, driven by an anti-marijuana prohibitionist mentality reigns supreme at the leftmost City Council. Nevermind that neither dispensary currently open has had any gang associations whatsoever, and a well-run dispensary would put drug-dealing street gangs out of business and customers would vote with their feet.

"Still, city planners said they need more time to make a recommendation about expanding regulations on dispensaries. The current ban was set to expire Feb. 8. Planners first asked
for a ban last June after receiving near daily inquiries about opening pot clubs -- as interest sparked by an announcement from the Obama administration that California
dispensaries would no longer be targeted by federal drug agents. Only Kriege has
pursued a formal permit request. Several council members said they agreed to give planners more time to ensure that dispensaries don't operate at a hefty profit, given that medical marijuana is supposed to be a low-cost enterprise."
BECKY: This is the opposite of what they have actually said. They have urged operators to charge the same amount of money as black market street prices so that buyers are disinclined to sell it once they get it. Technically the dispensaries are not supposed to profit, but quite a bit of money does change hands. For budget-starved Santa Cruzans paying a very high sales tax and facing cuts in services, taxing marijuana seems a logical solution.

The ordinance doesn't say anything about the price, other than that they must provide it to anyone eligible, even if they can't afford it. (I am unaware of any other non-profit in Santa Cruz which is required to give away product!) Both dispensaries have attempted to supply grass to low-income folks including a discount and 'compassion baggies' which they give away.

"My primary concern is that our local ordinance and state law seemed to me to say a dispensary can only be a co-op or collective," Councilman Don Lane said. "Both models are democratically controlled and member-oriented."
Don is behind the times. Owners quickly re-organized their operations to fit the cooperative or collective model. Buyers show proof of their medical eligibility, and agree to a set of terms. They then join the collective, thus complying with State Law. But apparently Don needs more time to figure this out. None of the reasons proposed make the slightest sense. The dispensaries have not generated a single call for service, not surprising considering that the ordinance requires a uniformed security guard to be on the premises during hours of operation (again adding to the costs which no other business or non-profit is required to do).

I can't imaging that GREENWAY is "democratically controlled" either. Owner, Lisa Molyneaux, invested her life savings to open the doors. A buyer coming to score some bud hardly has the same say about how it is run. Perhaps DON LANE just doesn't like smokers, no matter their brand. In September, the council, led by LANE passed a sweeping anti-smoking ban that criminalized burning any combustible substance.