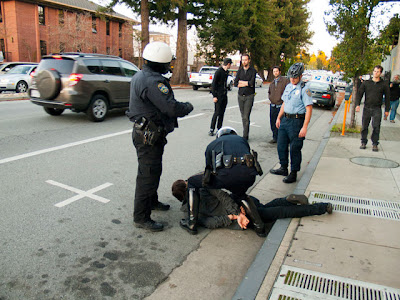 Santa Cruz, Ca. -- The Santa Cruz Police Department has issued a press release written by Chief Kevin Vogel. Unlike smarmy SCPD Spokesman, Zach Friend, Vogel makes no bones about where he stands. However, Vogel may not realize a number of issues that are at play. So to re-educate the Chief (who I think is a good man), I present his statement with my imbedded comments. You can read the statement without comments on the Santa Cruz Police Blog Website found here.

On late Saturday night, after over 72 hours of difficult negotiations, Occupy Santa Cruz ended their takeover of a vacant bank building at 75 River Street. Our goal was to have a peaceful resolution to this illegal and unproductive action and we were successful in that endeavor. Thankfully, the group was able to show the maturity that had been lacking in the first three days of the takeover.

Police violently tackle a man to the ground near 75 River Street minutes after it was occupied by Autonomous Anonymous Photo courtesy of Bradley Stuart
BECKY: Negotiations were made "difficult" when SCPD publicly named police negotiators as suspects, and when police violently tackled a man to the ground for POSSIBLY trying to move some orange traffic cones and seized his camera and cellphone. Nor did this action end because of police pressure or because the group developed "maturity." It ended because the protesters felt they'd proven their point. They consensed that there was no need to fight tear gas, riot cops, and taser guns if a peaceful, strategic exit could avoid that.

It is our intent to work with the District Attorney's Office to identify those that are responsible and hold them accountable for the trespass. In addition, we will be reviewing the costs associated with the takeover to see if there is any way we can recoup some of the public funds that were spent during the last few days. Clearly, as chief, I would prefer our resources be dedicated to more pressing issues than people that blatantly disregard reason, property rights and common sense.

BECKY: So the only damages were the costs police ran up all by themselves in their mostly ineffective response to the building takeover? Trespassing on an empty property left behind by an absentee landlord. Is that who the SCPD thinks we should be spending limited resources protecting? Apparently so.


I can't make it clearer that no one has a First Amendment right to break into someone's property, commit acts of felony vandalism and ignore the law. Their actions were senseless and childish and diverted our limited resources. In addition, it placed our officers in needless danger; something that I find completely unbelievable.

BECKY: There is no 1st amendment right to enter a boarded up building. No one BROKE in. Police have yet to name what 'vandalism' was committed. And the LAW which Vogel seems so concerned about protects a predatory lender's abandoned property over proper use of a community asset, and uses public money to do so. In this case, the LAW serves the 1% and the enforcers are paid for by the 99%. And calling an action that befuddled, confused, and outstepped the cops "childish" is just name-calling from a poor loser.


We had worked hard to develop a Plan B to protect people and property and were fortunate that we were able to end this through the skilled work of our negotiators.

BECKY: The exit had NOTHING to do with SCPD negotiators, skilled or otherwise. The demonstrators consensed to end the occupation voluntarily and peacefully.

It was difficult, especially given the lack of a central figure in the group to negotiate and their initial greeting of expletives and slurs about police; not exactly the best basis for friendly negotiation.

BECKY: The group picked people to address the press and to liason with the police, so I don't buy that the problem was "who" to talk to. Police were chastised for setting up road blocks and snarling the evening commute and for tackling a protester and seizing his camera.

Within hours, they stopped answering phone calls on the cell phone we provided and continually provided us with unreasonable desires and no time horizon for vacating a space they had no right to be in. The sense of entitlement and disregard for the law is appalling.

BECKY: Wells Fargo's sense of entitlement and disregard for the community of Santa Cruz is appalling. In addition to predatory loans and foreclosures, they had left this perfectly usable building located on prime real estate downtown empty, unused, and taking up space. Furthermore, it is owned by an absentee landlord.

To say the least, it detracts from whatever their initial message was to have such an escalation of action. Some were quoted in media outlets showing their willingness to be arrested and their lack of interest in negotiation. Others were shown harassing the media or police that were there to speak to them. No longer can we trust that their intentions are purely political protest or other reasonably protected First Amendment actions.

BECKY: The actions, though a technical violation of the law, was completely political, a valid protest against Wells Fargo and Bank of America who were located on each side, and a protest against withholding a valuable building from any productive use for over three years with the apparent blessing of police, politicians, and the Downtown Association.


We witnessed anarchists, like those involved in the May Day riots, openly participating in the initial takeover and saw some quoted that were willing to face any sort of police action in order to defend their "right" to illegal takeover of the building.

We cannot thank the community enough for their support during this time and their calls of encouragement of how we handled the takeover. I personally share the frustrations of many that this was a completely unacceptable and over the top way to garner attention to their vague cause. I plan to continue the conversation about these issues with the community in the coming week.

BECKY: Of course the CALLS he is talking about were coming from merchants, property owners, banks, and the Downtown Association. Nor was the cause "vague." Clearly 75 River Street takeover highlighted the blighted nature of the building and showed the slavish response of the SCPD to their masters, the MAJOR property owners (the 1%). Not vague at all, and the SCPD slipped right into it.

As always, if you have any questions or concerns please feel free to contact us.

Kevin Vogel
Chief of Police
Posted by Santa Cruz Police at 12:33 AM

Posted by Becky Johnson at 6:00 AM