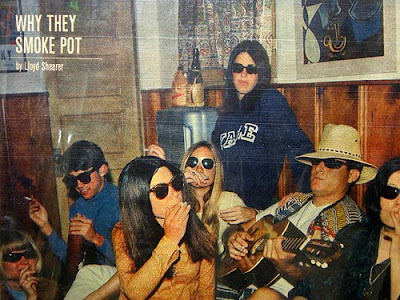 NOTE TO READER: The following drug war screed by the editorial board of the Santa Cruz Sentinel fails to report the obvious: area teens PREFER to use marijuana rather than tobacco, alcohol, or cocaine. This is good news. Tobacco is credited with killing 44o,000 Americans each year. Alcoholism (which directly kills 23,199 each year) not only is detrimental to developing brains, but causes addiction, car accidents, and family strife. The fact that cocaine use has dropped in the USA is also good news for us and bad news for South American drug cartels. Likewise, with a healthy marijuana economy right here in California, those cartels are robbed of profits as well. So what is the bad news? This also speaks well of our young people that they can read through the drug war propaganda and reject that which is not true. Marijuana does not cause drivers to get into car accidents and for users to wake up the next morning with no memory of what happened the night before. Yes marijuana is slightly addictive. Less so than coffee or chocolate but more so than anchovies. And they allow students and teachers alike to drink coffee or eat chocolate on campus. And stronger pot is not the danger the writer claims it is. People smoke a lot less of the stronger pot to get the same effect. And when they smoke too much, their brains shut off the marijuana receptors. Too bad our brains don't have similar alcohol receptors.

So why the hypocrisy? Could it be that the SENTINEL is the mouthpiece for the police who have not yet gotten the message: We in Santa Cruz don't want people arrested for possession or use of marijuana. It is said that no jury of 12 in Santa Cruz will convict a person for mere possession or use of marijuana. So why is the SENTINEL so behind the times? With pharmaceutical use way up, the "drug war" has become public policy driving private corporate profits by policing herbal "competition" out of business.

As We See It: Confronting teen drug use

The rest of the nation appears to be catching up to Santa Cruz County in one unfortunate aspect: marijuana use among teens.

According to a new government report released this week, one in 15 high school students in the U.S. smokes pot on a near-daily basis.

Not only is that a startling figure, it also reflects what appears to be the highest use since the druggy 1970s, and goes against other substance abuse trends showing use of alcohol, cocaine and even cigarettes declining in the same population.

And here's another way to consider the drug use data: If the numbers are true, then one in 15 high school students is either already addicted or well on the way to becoming addicted to increasingly potent marijuana.

Psychologically, however, it's all too true.

We bring up Santa Cruz County because marijuana and alcohol use have been significantly higher among high-schoolers in this community than among peers statewide.

Correspondingly, the acceptance among Santa Cruz County adults of marijuana for recreational use, while declining slightly over the past two years, remains high -- about half of all adults surveyed still find it acceptable. The acceptance rate is higher among white and North County adults than in the primarily Latino South County.

The medical marijuana movement also is prevalent in Santa Cruz County and has burgeoned throughout the state. Federal drug authorities say they believe the uptick in teen pot use is partially due to the increasing prevalence of medical marijuana, which is available in dispensaries regulated in this community by local governments.

According to an inpatient director at the Betty Ford Center in Rancho Mirage, it's also not uncommon for young adults who enter the center because of substance abuse or addiction issues to show up with medical marijuana cards.

The message in recent years that has gone out to young people is that marijuana is good medicine. And while that's true for some seriously ill people, the prevalence of medical pot cards only drives this point home.

The teen survey also showed that teens are also influenced by their parents. It might seem to many parents that young people don't pay attention to them, but that really isn't true. If parents aren't bothered by their son or daughter smoking pot -- or if they smoke marijuana themselves somewhat regularly -- then guess what? It doesn't take a genius to figure out that the teens who were smoking pot even more prevalently 30 years ago are today's parents.

Since there are fewer drug prevention resources available today than just a few years ago with government funding in a free-fall downward, that means parents are the primary adult figures who can speak into their teens' lives about what chronic drug use does to a person's mental, physical and spiritual life.

The question is, do they really believe that's true? Do you?

Posted by Becky Johnson at 7:59 AM