Letter to the Board of Supervisors on Sweeps of Homeless Encampments 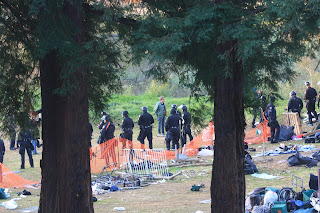 re: sweeps of homeless encampments in Santa Cruz

Dear Chairman Leopold, and members of the Board of Supervisors for Santa Cruz County,

As you know, the City and County of Santa Cruz have inadequate affordable housing available for poor and homeless people. While many public and private shelter options are available and have openings at any one time, they could, in no way, meet the sheer number of those who have no financial resources to purchase legal shelter. So it is with surprise, concern, and dismay that we read weekly accounts of a joint effort between the Parks and Recreation Department, Public Works, and the Santa Cruz Police Department quantifying efforts to sweep areas commonly used for illegal camping. As these campsites are being "abated," press releases have been issued announcing the number of camps destroyed, citations issued and arrests made.

A related concern exists in County government with the recent sentencing of Gary Johnson and his attorney, Ed Frey to jail for 2 ½ years in Gary's case and six months in jail for Ed for the “crime” of lodging. PC 647 (e) draws its origins from a tattered history of Black Codes, Jim Crow, and civil war racism which we had thought had been purged from our justice system during reconstruction. This misdemeanor statute, the statewide anti-lodging code has been mis-interpreted by our courts as outlawing sleeping, when a clear reading of the law says nothing of the kind.

We urge you to use your resources to free both Gary Johnson from captivity and to defer any further punishment of Gary or Ed indefinitely. We ask also, that you review whether it is either legal or advisable to use PC 647 (e) at all.

What these events and policies represent are peoples' lives being uprooted, their meager possessions seized or destroyed, and the persons involved moved along, cited, or arrested.

Let me remind you, two of the three shelters in Watsonville closed recently. This Saturday, Page Smith Community House closes for 5 months, and will be moving its entire population into the Paul Lee Loft. This will leave only the 30 spaces at the River Street Shelter for emergency housing.

In the City, the current City Council are only willing to fund a bus ticket out of town despite critical needs for legal shelter.

With completely insufficient shelter available, homeless people are left to mill around, unable to sit down, lie down, or sleep whether it is daytime or night. Their overall health suffers, sleep deprivation occurs, and many who tend to self-medicate do so more. Even worse for local merchants, is that when these camps are raided and destroyed, their occupants have nowhere to go but into City parks and downtown business areas where they are not wanted at all.

Police raids, and Sheriff's citations for illegal “lodging” conducted during an obvious shelter emergency, are unproductive, a waste of public resources, and in light of the lack of legal shelter available to these people, inhumane. HUFF has already called for the SCPD, Parks&Rec, and Public Works to CEASE AND DESIST massive abatement practices when no alternative shelter can be offered.

Now we are asking you, our elected representatives, to act to enact policy whereby PC 647 (e) citations will be suspended until the shelter crisis recedes.

"Housing" homeless people in jail for the "crimes" of "living" "sleeping" "lodging" or "camping" represent institutional abuse of persons whose economic circumstances forbid their ability to purchase legal shelter. Those who knowingly continue such practices will ultimately be held accountable for the human misery they are fomenting.

I thank you for your personal consideration of these issues and invite further dialogue. HUFF holds weekly meetings and I would invite all or any of you to attend our next meeting to explain your policy and practices using civil dialogue and an open process.

Posted by Becky Johnson at 6:20 PM