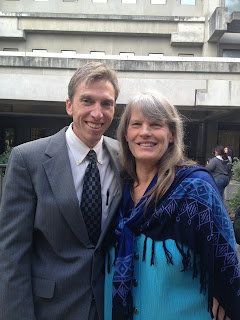 Santa Cruz, Ca. -- 12 jurors and 2 alternates listened to Linda Lemaster tell her story on the witness stand of her night on the steps of the courthouse back in August of 2010.  She told jurors that she had not meant to fall asleep at all, despite a certain civil-disobedience element of the protest going on. For Peace Camp 2010 WAS a protest against Sleeping Bans. Part of the protest included people sleeping openly on the courthouse steps to educate the public on the lack of legal places for homeless people to sleep in the City and County.

"I was there to attend to Christopher Doyon," she told jurors. "He wouldn't go to the hospital, and I couldn't get anyone else to watch over him, so I ended up staying there that night."

Her good Samaritan efforts were not rewarded. At 4:30AM, Sheriff's deputies woke her and others up to cite them, not for MC 6.36.010 section a, the Sleeping Ban, which outlaws the act of sleeping between 11PM and 8:30AM (an infraction), but instead, sheriff's were using PC 647 (e) a Statewide part of the disorderly conduct code which outlaws "illegal lodging." What constituted "lodging" proved to be a sticky wicket. Not that that stopped prosecutors or juries.

While PC 647(e) applies to the entire State, Sheriff's opted to enforce it ONLY on the steps of the courthouse where the protest was taking place. Those who refused to leave quickly enough were cited. Lemaster attempted to speak to a Deputy about Doyon and his condition, but was asked to wait. She complied but was cited instead. While Lemaster was not homeless, and had not made those steps her "new home", on November 9th, the jury convicted her.

In May 2011, Ed Frey and Gary Johnson were both convicted by a jury of illegal lodging and Judge John Gallagher sentenced them both to six months in county jail. Both have finished serving their sentences.

It's estimated that each jury trial costs between $80,000 and $100,000 to conduct. Jail costs at our already overcrowded facilities are in addition to that figure. Housing homeless people in area motels could cost a fraction of that amount.

Lemaster, who suffers from severe allergies and asthma,  worries her health could be adversely affected if she is incarcerated. She currently lives in specialized housing to reduce the impact of dust and mold on her lungs.

Today, Linda Lemaster is to be sentenced by Judge Rebecca Connolly at 3:30PM in dept 5. Many of her supporters are likely to be there and will speak on behalf of Ms. Lemaster. At age 63, Linda, a disabled woman and the mother of three has done a remarkable amount of service to the community of Santa Cruz. Despite three separate bouts with homelessness herself (the last time due to a fire at her father-in-law's apartment that resulted in the entire family becoming homeless), Lemaster has served on a number of City Commissions and Task Forces. 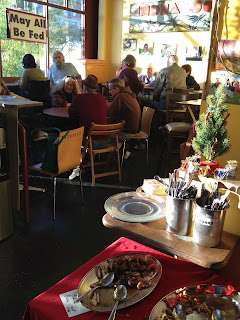 Supporters begin to gather at a Benefit for Linda Lemaster held at India Joze Restaurant on Dec 2nd. photo by Becky Johnson

She is the former Chair of the Commission for Prevention of Violence Against Women, Former Chair of the Homeless Issues Task Force, project director of Housing Now! Santa Cruz, and a member of the County's Homeless Action Partnership which recently sponsored a very successful "Homeless Summit" attended by 250 social service providers, police, politicians, faith-based program members, and homeless advocates at Cabrillo College on December 1st.

In addition to her service for non-profits and City Commissions, Lemaster is a gifter writer, has been published in Street Spirit, and has her own blog, Linda's Hearth. She is personally compassionate person who has helped many individuals suffering from homelessness thru feedings, clothes donations, and offering showers to some as well.

A Rally is planned at 2:30PM at Occuplaza (The northside of the courthouse on the Water St. side) with sentencing to begin at 3:30PM  in Dept 5.

IF U OPPOSE the use of Sleeping Bans or the use of PC 647 (e) against homeless people, please contact DA Bob Lee, District Attorney for the County of Santa Cruz with your concerns.