What is 75 River Street worth to Wells Fargo? 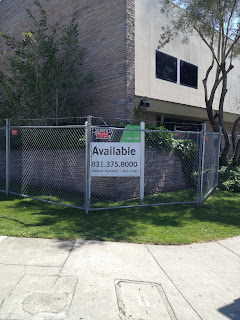 Santa Cruz, Ca. --  On November 30th 2011, 100 to 200 people entered an empty bank building leased to Wells Fargo and turned it into a community center.  After 3 days, they cleaned up the building and silently departed, having made their point: Empty Buildings ARE the crime!  Especially in a City where over 1000 homeless people shiver in the cold each night, and hundreds of people would welcome having a space such as 75 River Street in which to open a business, a non-profit, or some City service which serves the public. Instead, we get nothing. No jobs. No services. Very little in the way of taxes. A deadspot right downtown, so central to Santa Cruz it shares a boundary with the main Santa Cruz Post Office property.

A forlorn-looking "For Lease" sign has been hanging on the north-west corner for years now. Records show that last time the building had an occupant was in 2008 when Wells Fargo "merged" with the locally-owned Coast Commercial Bank. As of this date, its been empty for four years and counting. 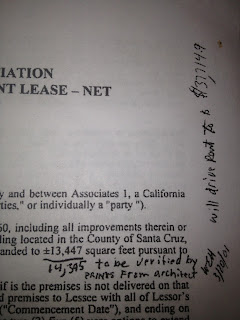 Portion of lease owned by Wells Fargo for 75 River Street


Here is why we shouldn't expect this building to have a tenant anytime soon, especially not at the $28,790/mo. asking rent. You see, the ACTUAL rent Wells Fargo is paying to property owner, Barry Swenson Properties, is $37, 714.90/month. Rentals of commercial properties in downtown Santa Cruz are extremely costly, but even so, no one has rented this space at only 76% of its actual cost.

To understand why Wells Fargo continues this practice, one must understand how banks work. This isn't the easiest of tasks as bank practices are shrouded in mystery, with all disputes settled in mediation and not subject to criminal prosecution or public record. However, back in the early '90's, the Federal Reserve Bank of Chicago published a helpful pamphlet called "Modern Money Mechanics." While currently out of print, some enterprising person photo-copied it and helpfully posted it online here.

Here is undoubtedly what Wells Fargo is doing with the property at 75 River Street.

This value is added to Wells Fargo's portfolio as an asset with a dollar value, whether it is rented out or not. According to the rules of the Federal Reserve fractional banking system, WF must keep 1/10th on hand and can lend out 9/10ths of the value to its customers in the form of home, car, and business loans. Therefore, the $452,578.80 becomes the 1/10th and WF legally places 9/10ths of that amount into its general accounts, manufacturing that amount completely out of thin air. 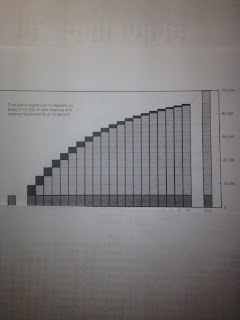 Cumulative expansion in deposits on initial deposit of $10,000 over several stages resulting in over $95,000 after 20 stages under Federal Reserve fractional banking system. --From Modern Money Mechanics


They get to keep all of the interest made too.

Wells Fargo is now $3,620,630.20 to the good for just one year. This exceeds the asking rental amount of $345,480.00/yr rental income they would get if they actually rented it out to a tenant. Since the property is NOT rented, WF is probably deducting either the lower amount or the higher amount of $452,578.80/yr as a LOSS to offset profits elsewhere in their portfolio.

Now if Wells Fargo has any kind of relationship with any other bank, let's just say Bank of America, since they have a legal relationship with any bank registered with the Central Banking system of the United States, including BofA. They can "lend" the lease to B of A as a "Stage 2" deposit (minus the 10% WF keeps in its reserves).  So  B of A then takes the $4,073, 209.20 WF has available to loan.

Why do bankers get to manufacture all this money out of thin air? Because of the Federal Reserve System which was established in 1913.  Why do we allow bankers to profit so immensely while leaving "dead spots" in our community? I guess because no one can believe what the enormity of their crimes.

Currently I am facing 4 charges leveled by Wells Fargo against 11 local activists, Occupy Santa Cruz members, and alternative media journalists. I am accused of felony conspiracy to trespass and felony conspiracy to vandalize the empty building at 75 River Street, as well as 2 misdemeanor counts of trespass and vandalism.  You see, as a homeless activist, I believe these buildings should be used for housing, businesses, non-profits, or community services. With homeless people dying on our streets, Empty Building ARE the Crime! While I am innocent of these charges, I considered the 3-day occupation of the building to be a righteous act drawing attention to an injustice occurring right in our community.

In addition, Wells Fargo has cooked up enormously overblown charges of $26,000 in "damages" for which they have submitted billing sheets. Of the 9 contractors WF used, not a single one was from Santa Cruz County, including rekeying the entire building using a locksmith in Foster City and charging $6,545.41 to remove "broken" furniture and take it to the dump by a contractor in San Leandro, California. In fact, these invoices for "damages" mirror the trumped-up documents Wells Fargo uses as assets to charge you and me REAL money.

But until the fractional banking reserve system is reformed, we will see no changes. Empty buildings surround every bank we see. And indeed, in Santa Cruz, they are everywhere.