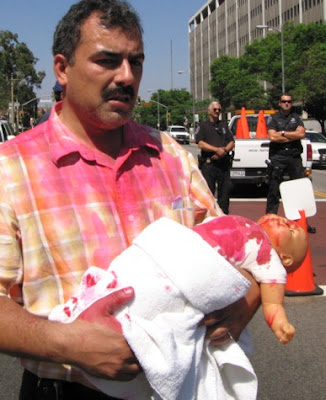 Photo of an anti-Israel protester in Los Angeles Aug 13, 2006 carrying a "bloody" doll

NOTE TO READERS: In my long running battle between Santa Cruz Indymedia and later Indybay.org, many posts of mine have been deleted. If you follow the link below, it will take you to the article to which I was responding. Readers can note that my post, which was censored, violated no editorial guideline at indybay.org. In fact, my post added important sources for readers to consider regarding the Lebanese Christian Phalanx massacre in Lebanon at Sabra and Shatilla in 1982. This is the so-called "Israeli" massacre in which no Israeli soldier participated. Ariel Sharon, a general at the time, was held responsible by the Israeli Knesset because they ruled he could have stopped it from happening and didn't. He was forced to resign as a result. Below is my banned post. --Becky Johnson Aug 3 2009

The number of people killed at Sabra and Shatila is disputed. Here are a few wide ranging sources from Al Jazeera to the Kahane Commission and some NGO reports. Since there is so much dispute, beware of anyone who claims that they are the ultimate authority on the death toll. ---Becky Johnson

"Estimates of the number killed range from 460 according to the Lebanese police, to 700-800 calculated by Israeli intelligence. Palestinians claim 3,000 to 3,500 dead and call the action "genocide".

The International Committee for the Red Cross initially counted 1500 bodies at the time, but by 22 September this count had risen to 2400. The next day, another 350 corpses were uncovered, raising the total to 2750.

The Lebanese Red Cross personnel counted over 3,000 bodies not including those buried under rubble placed over them by the bulldozers on Saturday morning.

Posted by Becky Johnson at 5:08 PM