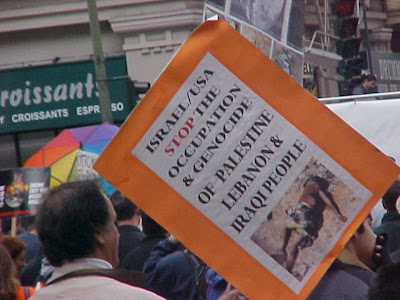 Santa Cruz, Ca. -- Tammi Benjamin, of Scholars for Peace in the Mideast has been spearheading a series of e-mail discussions with Peter Stein, the Executive Director of the San Francisco Jewish Film Festival. At issue is the decision by the SFJFF to play the film "Rachel" by Simone Bitton as its North American debut, and host a speech by Rachel Corrie's mother, Cindy Corrie. The first showing is scheduled for Saturday, July 25, 2009 during the Jewish Sabbath. The first of two showings, and where Cindy Corrie will be speaking, starts at 1:30PM at the Castro Theater at 429 Castro St, SF. The American Friends Service Committee and Jewish Voice for Peace are listed as co-presenters. So far, Stein and the SFJFF have held fast and the "Rachel" screening is going forward.

HERE IS AN ACCOUNT OF THE SCREENING WHERE DR. MIKE HARRIS SPOKE FOR 10 MINUTES PRIOR TO CINDY CORRIE'S TALK.

The controversy about the San Francisco Jewish Film Festival's invitation to Cindy Corrie hit a fever pitch this week. An editorial in "j", our local community newspaper, endorsed the same opinion previously expressed here. In addition, the president of the SFJFF board resigned and two prominent local foundations issued a stinging criticism of the Film Festival's decision to invite Mrs. Corrie.

But things were to get even more interesting. I was personally invited by Peter Stein, the executive director of the SFJFF, to make a brief statement prior to the film to discuss why many of us objected to this program. While I knew that this would be a hostile audience, I didn't anticipate objections from many dedicated activists within the pro-Israel community who felt that this would let the Film Festival off the hook by allowing them to claim that they had "balanced" the program. However, StandWithUs fully supported this appearance, realizing that this was a unique opportunity to present our viewpoint, even knowing that the majority of the audience would be hostile.

And everything that happened yesterday was exactly as anticipated. Not only had the event's co-sponsors, Jewish Voice for Peace and American Friends Service Committee, sent out appeals to their members to show up in force, but Cindy Corrie herself sent out a similar e-mail. So the crowd's reaction was no surprise, and you can see it for yourself here.


The film, of course, was utterly lacking in context. One brief mention that the IDF teams were looking for explosives-smuggling tunnels. No mention of the terror war. An interesting point near the end of the film when an Israeli anarchist from Jaffa is interviewed-- he talks about resistance and a few other similar phrases about idealism, then said that some of the words don't translate well into Hebrew-- the audience laughed at that line.

Peter Stein didn't ask any hard questions of Cindy Corrie-- it was a total softball interview. He did ask her what she thought of the controversy here, she said it surprised her, talked about some of the Jewish community supporting her the first time that the play My Name Is Rachel Corrie was pulled from the theater in New York. She thinks it has less to do with her appearance than with discussions in the Jewish community about Israel, and those whose allegiance to Israel "leads them to support the status quo".

She took maybe 3 questions from the audience, each devolved into about a 10-15 minute answer, everything of course building on the sympathy factor. She did not address any specific political issues except that as far as the investigation into her daughter's death she was told by US officials that she will never get anyone in the US gov't to agree to investigate this fully, because it involves Israel.

I did not get to ask her the question I wanted to ask, which was as follows:

"Mrs Corrie, I'm sure you and I agree that too many people have died in this conflict. We all want peace, but some of us have different concepts of what "peace" means. My concept is that of a Jewish state of Israel and an Arab state of Palestine, living side by side in peace and mutual recognition. What is YOUR concept of peace?"

I don't know what her answer would be; but, based on the responses to my talk, I know what the audience's answer is. So the question that needs to be asked of the San Francisco Jewish Film Festival is this:

If you are attracting an audience that jeers a pro-Israel speaker, and cheers not only for boycotts, divestment and sanctions against Israel but also at the mention of Mahmoud Ahmedinejad, is that the kind of programming that is appropriate for a JEWISH Film Festival?

The full text of my remarks is below:

The Jewish Film Festival is an important cultural institution in our community. Yet, as Peter noted, this year there has been an uproar from not only our local Jewish community, but also from Jewish communities around the country and overseas, over the Film Festival’s choice of this film and speaker.

My presence here should in no way be considered as either endorsing, or even adequately balancing, this event. These few minutes cannot in any way provide an appropriate response to the next two hours.

I came here today to give voice to a different perspective—the perspective of the wider spectrum of the Bay Area and global Jewish communities, including our own community institutions such as the Jewish Community Relations Council, and ‘J”, our community’s newspaper which voiced strong concerns about today’s program, and including the respected Taube and Koret Foundations which have expressed strong opposition to this program as being inappropriate for a Jewish Film Festival.

All of us here know that Rachel Corrie tragically died when she intentionally put herself in harm’s way during an IDF counter-terrorism operation in the Gaza Strip. But many of us don’t know the names of other young American victims—Abigail Leitel, a 14 year old Baptist girl from New Hampshire, murdered when a suicide bomber blew up a bus in Haifa on March 5, 2003. David Gritz age 24, Benjamin Blutstein age 25 and UC Berkeley student Marla Bennett, age 24, all murdered on July 31, 2002 by a suicide bomber in the cafeteria at Hebrew University.

And none of them were engaged in anything more risky than riding a bus, or going to buy a slice of pizza or a cup of coffee. And, just as Rachel Corrie should be alive today, so should all of these young men and women.

They were all murdered before Rachel Corrie came to Gaza. That’s why the young IDF soldier was operating that bulldozer in Rafah. It wasn’t to wantonly destroy Palestinian homes. It was to destroy the tunnels used to smuggle explosives for murdering Israelis—tunnels that even now, the so-called “Free Gaza” members proudly boast of touring and photographing.

The International Solidarity Movement recruited Rachel Corrie at the height of the terror war and instructed her to ignore IDF security warnings. You will hear that they are a peace group. You won’t hear that ISM defined peace in a 2003 press conference as the destruction of Zionism and the Jewish State. You will hear that ISM supports non-violence. You won’t hear that ISM collaborates with terrorists, including Hamas, and even aided the terrorists who took over the Church of the Nativity in 2002. Nor will you hear that ISM leaders called suicide bombing “noble” and that they support terrorism as ”legitimate armed struggle.”

And, as ISM co-founder George Rishmawi said, “If some of these foreign volunteers get shot or even killed, then the international media will sit up and take notice.” They have used Rachel’s accidental death to accuse Israel of intentionally murdering innocents.

You will hear Israel’s counter-terrorism measures demonized, but not why they were necessary. You won’t hear about the organized, savage suicide bombing war that Palestinians unleashed against Israel in 2000-- a war that murdered over 1000 Israelis (mostly civilians) and wounded over 7,000 others, using bombs filled with razor blades, nails and rat poison; a war fought not for a Palestinian state that Arafat had already rejected, but against Israel's very existence.

And you will not hear about another foreign volunteer who was killed near Gaza. Carlos Chavez, a 20-year-old from Ecuador, was shot in the back while he planted potato seeds at a communal farm in Israel, about 100 meters from the Gaza border. His murder occurred on Jan. 15, 2008—2.5 years after Israel had completely withdrawn from Gaza. His crime was simply being in the state of Israel; the same crime for which the Hamas charter threatens all Israeli Jews with death.

You won’t hear about the incessant, anti-Semitic incitement that pervades Palestinian media, schools, and mosques, instilling hatred of Jews, celebrating those who kill them as heroes and martyrs, and denying Israel’s very right to exist. You won’t hear about the founding document of Hamas, which they still stand by today, and which openly calls for the murder of Jews everywhere. I have copies of excerpts from their charter right here, but it’s easy to find online. You won’t hear about the 8,000 rockets that have been launched into from Gaza into Israel, a small country just the size of New Jersey. You won’t hear about a Palestinian leadership that has failed its people miserably by using the billions they have received in foreign aid to build bombs and rockets, rather than schools and hospitals.

This episode should lead to some serious and thoughtful discussion about the role, and the responsibility, that a JEWISH Film Festival should take within our community. A Jewish Film Festival should not be presenting a film and speaker that demonize Israel, and that are being co-sponsored and promoted by groups, such as Jewish Voice for Peace and American Friends Service Committee, that support boycotts, divestment and sanctions against Israel, or, as AFSC did, host dinner for Mahmoud Ahmedinejad;-- —or perhaps even attract an audience that would applaud that.

No mother should have to bury her child—not Cindy Corrie, not Marla Bennett’s mother Linda, and not Carlos Chavez’ mother Gloria de las Mercedes. As you watch this film and hear from Rachel’s mother, remember how much context is completely missing from the film. Above all, remember the mothers of all the other Rachels as well, and the price they have had to pay simply for being Jews living in the only Jewish country in the world. Thank you very much.

Posted by Becky Johnson at 7:14 AM