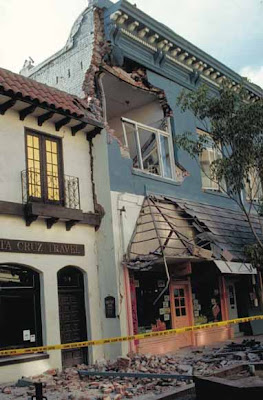 Santa Cruz, CA. -- I experienced the 1989 Loma Prieta Quake. I was cleaning houses in those days, and I had just finished cleaning a house up on Western Drive. The owner wrote me a check for $50 at 4:45PM. The house stayed clean for 19 minutes. The fireplace I had just dusted, collapsed into a heap. But I was not there.

I was eager to get back home because the San Francisco Giants were playing against the Oakland A's in the World Series. The "Bay Bridge Series" had crazed baseball fans and few could talk of anything else. My neighbors had left their three daughters with a babysitter and were at Candlestick Park.

As I drove down Laurel St, I drove past Fords Department Store for the last time. I had bought my son, Alex' cub scout uniform there. I was eager to pick up my two children at my Ex's house on Clay Street, before going home to watch the game.

Don invited me into the duplex, and my daughter, Rachel greeted me cheerfully. Alex was upstairs watching one of his favorite television shows. Don asked if I'd like to have some spagetti, and I accepted. I sat down at the tiny kitchen table on Clay Street when suddenly the room began to rumble and shudder loudly. I was immediately aware that it was an earthquake. Seconds after it started I thought "Wow, this is the biggest earthquake I've ever been in!"

I climbed under the kitchen table, and pulled my 4-yr-old daughter tight against me. Don tried to crowd under the table as well as the lights went out and the kitchen cupboards opened. Dishes started falling out and the sounds of breaking glass were evident. My daughter whimpered in my arms. And then it stopped.

I was three months pregnant at the time with my youngest son. I got out from under the table and was suddenly struck with terror at the fate of my oldest son, who was seven at the time. He had jumped into the doorway of the upstairs bedroom when the quake started. The big television in front of him swayed and then fell forward, but the only injury he got was a pinched finger in the doorjam.

He came downstairs and we all exited the building. Outside, the Clay Street neighbors were streaming out of their houses. The utility poles swayed as a second quake hit. I rushed to my car and put my daughter in her carseat. My son jumped in the front seat and I started the car up to drive to my house on Frederick Street.

I turned the radio on and only heard static. I started to spin the dial, and each station I encountered was static. At this time I realized the quake had been massive and that a wide area had been affected. I drove up Broadway and suddenly it was very slow going. At each corner I saw broken windows, toppled chimneys, and dazed people standing on their front lawns. The cars inched forward.

When I finally made it to my Frederick Street house, it was quite a sight when I opened my front door!! Furniture was everywhere, broken dishes, and everything on my mantel had been knocked to the floor. Even worse, in my bedroom, my huge round mirror on my dresser had been smashed to smithereens which now filled most of my shoes. The kitchen floor was covered with spilled food and broken dishes.

We had no power,but oddly we still had phone service. It's just you'd have to wait about a full minute before you got a dial tone! Aftershocks were happening every five minutes so we decided to not stay in the house. I moved all the kids out into my Toyota station wagon where I was able to dial in a radio station.....in BAKERSFIELD!! The announcers there said "Oh, wow, that was a big quake." I heard that the Bay Bridge had collapsed. And I heard the epicenter was in Santa Cruz.

The babysitter came over, and said she was terrified and wanted to go home. She asked if I'd watch the girls. I said "sure" and we made a picnic out of it, in my car and outside in the parking lot. The kids took turns sitting in my lap. It was almost eleven o'clock before their parents were able to make it back from Candlestick Park.

My husband was not home when I arrived. He had been at his job at Borland Software in Scotts Valley and had just begun his "swing" shift as the computer operations AP/AR technician. He had heroically re-entered the building to look for victims trapped in the badly damaged building and to shut off the main power switch to the company's mainframe so that the data would be safe.

"When I went into CEO Philippe Kahn's office on the third floor, it looked like a bomb had gone off. The main girder just below Kahn's desk had snapped. He was in Australia at the time. Had he been at his desk working, he would have been killed. His office was just destroyed."

After he had done what he could on site, he headed back to Santa Cruz by way of Granite Creek Road. When he hit Branciforte Creek Road, it was bumper-to-bumper traffic. As he entered Santa Cruz, he saw three dark smoke plumes rising from Santa Cruz.

He arrived at least two hours after the quake in his white, "hippie" van. Our family spent the night in that van, rocking and shaking every twenty minutes.

Our house was structurally sound, but an upstairs apartment shook a hot water heater line loose and the water flooded the floor. The family was not home, and when they returned two days later, they were greeted to a flood.

Later when I was able to travel around a bit, there were missing chimneys all over town. The Cooperhouse was said to be damaged beyond repair. I have my doubts. They took that building down so fast and it was a real hard demolition job. The demolition of the Casa del Rey retirement home by Seaside Company, CEO Charles Canfield is another dubious act that occurred. One of the most telling places was that section of Capitola Rd. extension where it curls up the hill towards 7th Ave. A HUGE section of pavement had slid almost 20 ft down the hill leaving dirt and gravel underneath it. Closer to Soquel Ave, right in front of where Jefferey's Restaurant is now, was a ridge or bump, like a natural speed bump, where the pavement had buckled.

We got out power back in less than 24 hours. I don't know how they did it. People were ecstatically happy to get their lights back on. PG & E workers were heroes! People were giving them the thumbs up, and shouting "Thank-you" all week.
Posted by Becky Johnson at 1:49 AM