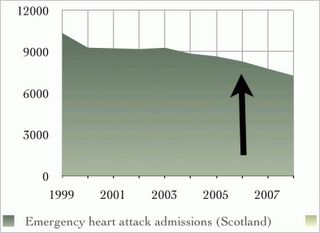 Graph: Total number of hospital admissions in Scotland for heart attack admissions before and after smoking bans were passed in those localities.

NOTE TO READER: Christopher Snowden has been battling for personal freedoms for a long time. Here Snowden addresses a recent report which supposedly shows a dramatic drop in heart attacks since smoking bans have been implemented in Scotland and England. This underscores the hazard of taking our health information from mainstream news. This claim cannot be substantiated with examining hospital admissions during the time period following enactment of the ban. Even worse, the "study" the reporters are quoting from doesn't appear to exist. So the report is false, AND the study non-existent---but it's international news!! ---Becky Johnson, editor

I think I'm starting to know how Bill Murray felt in Groundhog Day...

Bans on smoking in restaurants and bars reduces [sic] the risk of heart attacks among non smokers, according to [sic] hard hitting report.

The research, by the U.S. Institute of Medicine reviewed 11 key studies of smoking bans in Scotland, Italy, the U.S and Canada.

They [sic] found drops in the number of heart attacks across the board, ranging from six per cent to an impressive 47 per cent.

Since the idea of smoking bans dramatically reducing the heart attack rate is yet again being circulated by lazy (and illiterate) journalists, I don't feel so bad about publishing yet again the facts which show this to be complete and utter rhubarb. Not only has it not happened, but it could never happen. The smoking bans of England, Scotland and Wales had no effect whatsoever on Britain's heart attack rate.
And no, before you ask, the figures shown below have not been peer-reviewed. There is no need to peer-review complete hospital admissions statistics. They represent the complete data set. They are painstakingly reviewed by professional statisticians before they are published. These statisticians have no agenda and no a priori hypothesis to support. These are the facts.
Epidemiological studies require peer-review because they use a sample of the population to make claims about the entire population. They could, and do, get it wrong. The hospital data of England, Scotland and Wales are the whole data. Complaining that it is not peer-reviewed is like MORI complaining about an election result because they failed to predict the result.
And, unlike Jill Pell, Stan Glantz and all the other authors of the heart attack miracles, I can show you the raw data behind the facts. They are here, here and here.
The myth of the smoking ban ‘miracle’
‘Heart attacks plummet after smoking ban’ declared The Sunday Times earlier this month, as it reported that England’s smoking ban has ‘caused a fall in heart attack rates of about 10 per cent’ (1). A few days later, The Scotsman upped the ante, informing its readers that ‘Smoking ban slashes heart attacks by up to a third across world’ (2).

Tales of heart attacks being ‘slashed’ by smoking bans have appeared with such regularity in recent years that it is easy to forget that there is a conspicuous lack of reliable evidence to support them. It is almost as if the sheer number of column inches is a substitute for proof.

The most recent reports are a case in point. Although The Sunday Times claimed a 10 per cent drop in heart attacks, nowhere in the 500 word article was a source mentioned and no one was quoted giving this figure. The ‘study’ the newspaper referred to does not exist, and the anti-smoking pressure group Action on Smoking and Health (ASH) – not renowned for downplaying the risks of passive smoking – went to the unusual lengths of posting a notice on its website the following day to point out that ‘the figures reported in The Sunday Times yesterday (and now circulating elsewhere) are not based on any research conducted to date’ (3).

Although the story quickly went around the globe, no one seems to know where the figure came from. It’s all rather strange. Basing journalism on anonymous sources is commonplace in the world of politics, but it is surely not necessary in the realms of science.

The second story – reported by a host of news organisations, including the BBC – also had no new data to report. Instead, it took its cue from an article in the journal Circulation which examined previous smoking ban/heart attack studies. If nothing else, the Circulation paper offers an opportunity to reflect on just how feeble the collected evidence is on this issue (4).

The first study to make the claim that smoking bans ‘slash’ heart attacks was met with howls of derision when it was published in the British Medical Journal in 2004 (5). Studying the modest population of Helena, Montana – where the number of monthly heart attacks seldom strayed into double digits – the study’s authors made the astounding claim that the town’s smoking ban had led to the rate of acute myocardial infarction (heart attacks) plummeting by 40 per cent.

Dubbed the ‘Helena miracle’ by a legion of sceptics, the 40 per cent finding was damned by its very enormity. Since the authors were adamant that the drop was due to secondhand smoke (rather than smokers quitting), the finding required the reader to believe that 40 per cent of heart attacks in pre-ban Helena had been solely caused by passive smoking in bars and restaurants. To understand quite how miraculous the Helena miracle was, one must bear in mind that around 10 to 15 per cent of coronary heart disease cases are attributed to active smoking. That passive smoking could be responsible for a further 40 per cent strains all credibility.

Despite the inherent implausibility of the hypothesis, further studies were swiftly commissioned. If smoking bans could be shown to immediately save lives, it would be a compelling reason to implement bans elsewhere and expand those already in place. And since all that was required to ‘prove’ the hypothesis was a rough correlation between a declining heart attack rate and the start of a smoking ban, the prospects were good. Heart attack rates had been falling for years in most countries and there were plenty of smoking bans to choose from. The law of averages dictated that another heart miracle would soon come to light.

Flawed though it may have been, the Helena research was followed by several studies that displayed such a cavalier approach to the scientific process that they bordered on the comical. Researchers in Bowling Green, Ohio, for example, saw a large rise in heart attacks during the first year of the smoking ban. Side-stepping this awkward fact, they simply redefined year two of the ban as the ‘real’ post-ban period and, since that year followed an abnormal peak, there was naturally a decline in the heart attack rate. As a consequence, the researchers could triumphantly declare that the smoking ban had led to a 47 per cent reduction in heart attacks (6).

In the Piedmont region of Italy, there was an inconvenient rise in heart attacks amongst those over the age of 60 after the ban, and so those people were simply ignored. In a study that was trailed by the BBC (‘Smoking ban reduces heart risk’), the researchers focused entirely on those under 60, thereby recording an 11 per cent drop in cases (7).

Studies such as these form the basis for the recent reports of smoking bans slashing heart attacks by ‘up to a third’. The Circulation paper gathers them together and concludes that, on average, smoking bans cause rates of acute myocardial infarction to fall by 17 per cent. It includes the studies from Ohio and Italy, as well as three studies that have never been published and have only been ‘reported at meetings’.

The paper does not, however, include a mammoth (published) study of the entire United States, which concluded: ‘In contrast with smaller regional studies, we find that workplace bans are not associated with statistically significant short-term declines in mortality or hospital admissions for myocardial infarction or other diseases.’ (8)

Nor does it include an (unpublished) paper which found no statistically significant fall in heart attacks amongst the entire populations of California, Florida, New York and Oregon (9).

Perhaps the most remarkable aspect of the ongoing heart-miracle farrago is the eagerness to focus on small studies when complete hospital data is so freely available. It is extraordinary that no BBC journalist, for example, has thought of taking a few minutes to see how many people were rushed to hospital with acute myocardial infarction before and after the smoking bans of England, Scotland and Wales. If they did so, they would see that smokefree legislation has had no tangible influence on heart attack rates at all.

The graphs below show the number of emergency admissions for acute myocardial infarction, with the arrow indicating the start of the smoking ban. What is abundantly clear in each case is that the number of heart attack admissions has been falling for some time. Far from causing further dramatic cuts in heart attack rates, the bans had no discernible effect.

(see chart showing ALL heart attack admissions in the entire country of Scotland before and after smoking bans were instituted in bars and restaurants at top of page.)

The press said: ‘Heart attacks drop by 17 per cent after smoking ban’ ( Telegraph)

The press said: ‘The number of patients suffering a heart attack in Wales has fallen dramatically following the ban on smoking. (Wales Online) 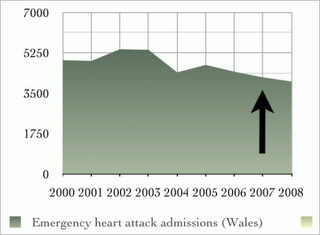 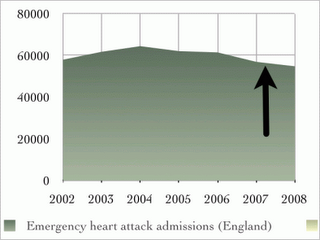 Publicly accessible hospital admissions data is like kryptonite to those who are so eager to believe in miracles. In most epidemiological studies pertaining to secondhand smoke, the raw data is not published. Here, it is open to all and shows quite clearly that the long-term downward trend in heart attacks has not been affected in any way by the implementation of smoking bans. It provides such a simple and straightforward rebuttal to the heart attack ‘slashing’ hypothesis that one wonders what level of hubris drives those who still espouse it.

The three graphs cover a population larger than the sample groups in all the studies reviewed in Circulation combined, but no matter how much empirical evidence exposes the fantasy of the Helena miracle, it may be too late for the anti-smoking lobby to back down on this issue. Too many reputations are at stake.

After five years of covering these stories so uncritically, the same may be true of the media. One can scarcely blame newspapers for covering stories that offer such dramatic conclusions as the heart miracles. The irony is that if they dug just a little deeper, they might find a more interesting, and more believable, tale of human folly.
SOURCES:
(1) Heart attacks plummet after smoking ban, The Sunday Times, 13 September 2009

(2) Smoking ban slashes heart attacks by up to a third across world, Scotsman, 22 September 2009

(5) Reduced incidence of admissions for myocardial infarction associated with public smoking ban: before and after study, British Medical Journal, 2004;328:977-980

(9) Do Smoking Bans cause a 27 to 40% drop in admissions for myocardial infarction in hospitals?, The Smoker’s Club

And all they wanted was non-smoking sections on aeroplanes...
Posted by Becky Johnson at 9:50 AM