Resource Center for No Israel 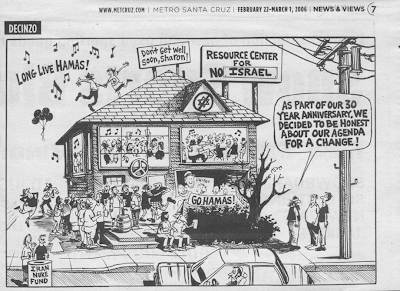 NOTE TO READER: I'm reprinting this 2005 editorial on the heels of the appearance by rapper M1 of Dead Prez at Barrios Unidos in Santa Cruz. Scott Kennedy, the mideast coordinator of the Resource Center for Nonviolence is a huge supporter of Barrios Unidos, a non-profit organization dedicated to improving the lives of Latino youth through industry and mentorship. Apparently Barrios Unidos has fallen under the RCNV's spell in hosting those who would bash the State of Israel.

At his talk in Santa Cruz, M1 called Israel's recent incursion into Gaza to defend it's citizens against 6,000 rocket attacks since 2005 "an attempt to wipe out a people, it's basically genocide." This so reminded me of Scott Kennedy and his RCNV tour group, who visited Aptos High School, Soquel, and Santa Cruz High Schools parading Ms. Sarandah as a "victim of Jewish violence" basically carried the same message: The Israelis are murderers but the Palestinians are engaged in legitimate resistance. You can hear M1 of Dead Prez talk at Barrios Unidos here. The RCNV was not a co-sponsor of this event.

Scott Kennedy’s "correction" on Page A2 in the Santa Cruz Sentinel June 10 2005 is no doubt damage control. But when the Resource Center for Nonviolence promoted the speaking tour of Robi Damelin and Nadwa Sarandah, they billed the event as two women who "are determined to transform their loss and grief into hope for a peaceful future between the two peoples" of Israel and the Palestinians. Robi Damelin’s son, an Israeli army lieutenant, was shot to death at the Ofra checkpoint in Samaria, when a Palestinian sniper from the Al Aksa Martyrs Brigade killed 10 Israelis, including three Jewish civilians, and injured four others before escaping. The soldiers killed were at the checkpoint to keep suicide bombers and terrorists from entering Israeli territory to kill Jews and Arabs both.

Nadwa Sarandah has billed herself as a Palestinian whose "sister Naila was stabbed to death by a Jewish settler" on the streets of East Jerusalem. Sarandah, who describes her sister, a health worker, as the "Angel of Jerusalem," leaves the impression in the minds of any who attend her talks that Orthodox Jewish settlers in Samaria are cold-blooded murderers. Sarandah is seen as someone who, despite supposedly justified hatred against Jews, has put aside feelings of revenge to work for peace. She and Damelin have toured the entire U.S. with their tales, even met with the U.S. State Department. Both women were included in the 100 Most Outstanding Women of the Year for their "peace and reconciliation" efforts.

But Nadwa Sarandah’s sister was not killed by a Jew. Mohammed Sha’lan, a Palestinian Arab, confessed, was arrested, convicted and sentenced on Nov. 18, 1999, to life in prison for killing Sarandah’s sister. He apologized for killing her because he thought she was a Jew and made a "mistake." He had not meant to kill an Arab. Even so, a Palestinian "human rights" Web site has him listed as a political prisoner who should be released.

In addition to Mohammed Sha’lan, the Israeli police have a second suspected accomplice: a serial killer who murdered 13 Palestinians in the same area where Naila died, all knifed. Nadwa dismisses this possibility because "the other victims were all men." Nadwa tours the U.S. with this blood libel against Israel.

How will the Resource Center for Nonviolence rectify the impression left in the minds of 125 students, a captive audience at a compulsory lecture at Aptos High School? Sarandah and Damelin appeared also at Soquel High School and Santa Cruz High School and at UC Santa Cruz. They were hosted by Rep. Sam Farr in Washington, D.C.

At UCSC, the two women talked of "peace and reconciliation," but their focus remained that we can only expect more violent attacks as long as Israel still "occupies Palestine," a country that still does not exist. When Nadwa Sarandah appeared on an episode of our local show, Club Cruz, she was asked if it is wrong to kill Jews. She refused to answer. Even sitting right next to Robi Damelin, she would not call for the members of Al Aqsa Martyrs Brigade to be disarmed and jailed even though they had killed Robi’s beloved son.

Kol Teffilah Synagogue in Santa Cruz received a message on its answering machine from a staffer at the RCNV one day after Scott Kennedy’s correction in the Sentinel, inviting congregants to a reconciliation event featuring a Palestinian woman whose sister had been stabbed to death by a Jewish settler! Since DAFKA.org exposed this fraud on May 21, it’s hard to believe Kennedy’s claim that he made a "mistake."

As for Robi Damelin, the woman has been a lifelong radical who in Israel has espoused the Palestinian cause. She considers Jewish communities in the disputed territories "ghettos of hate" and leads a group of Israelis who refuse to serve in the military. Her son David obviously disagreed, because he served willingly in the army and even requested combat duty, where he died protecting his fellow Israelis from terrorists. He was killed as he awoke from sleeping.

What can be done now? Will the 30,000 Sentinel readers who on May 22 read that Nadwa’s sister had been murdered by a Jewish settler, still hold in their consciousness the image of a violent, murderous Jewish settler? Will the high school students at three area high schools or at UCSC ever be told that the invited speakers were a fraud? In fact, Nadwa’s story of having lost her sister to Jewish violence was the reason the RCNV planned this event in the first place.

see also:
Read all about it: "Meet the Parents Circle" by Lee Kaplan
published June 10 2005 at: