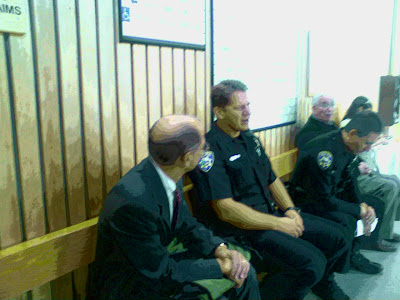 City Attorney John Barisone and SCPD Sgt. Eric Seilley wait outside of Commissioner Kim Baskett's courtroom on November 3, 2009 before prosecuting Robert "Blindbear" Facer for the "crime" of sleeping on Santa Cruz Main Beach the night of June 11th in 2008. photo by Becky Johnson

Santa Cruz, Ca. -- When Robert "Blindbear" Facer slept on the beach on June 11, 2009, he was dealing with a couple of issues which were of great concern to him. "I was trying to watch my boat which was anchored offshore," he explained, and "I had all my gear on the beach. I couldn't figure out how to get my gear into the boat so I could sleep there."

Blindbear, who's been homeless for the past 20 years, and in Santa Cruz since June of 2008, first sought shelter when he came to Santa Cruz. "I went to the River Street Shelter and got on their waiting list. They already had several pages of names. They said that if you call every three days, they will keep your name on the list. " Blindbear did call every 3 days or so, but once he waited 4 days, and his name was moved again to the bottom of the list. And that was before he lost his cellphone. "By the end of July 2008 I have pretty much given up. " He also said that he thought he might need the shelter more in the winter, and would wait to try again and time it so he'd have shelter during the coldest, rainiest month. "But they only give you a place for 30 days and then they kick you out again." Because Blindbear is Amish, his religion prevents him from using modern conveyances ( the bus) up to the winter armory as was done last winter.


City Attorney John Barisone in his closing arguments before Commissioner Kim Baskett openly claimed that Blindbear could have "swam out to his boat and slept in it" despite the fact that the ocean is icy cold, and once he got into his 17" boat anchored just past the surf he'd be soaking wet. But Blindbear had testified that keeping his gear dry was his bigger concern, a detail Barisone conveniently forgot. Barisone also suggested that Blindbear, who is Amish "could have traveled to an Amish community and slept there."

Pro bono Defense Attorney Ed Frey defended Facer and attempted to submit for the record documentation regarding the lack of shelter space available for Mr. Facer on the night of June 11, 2008. But Commissioner Baskett refused to allow defense expert witness, Robert Norse, co-founder and member of Homeless United for Friendship & Freedom to testify. She also accepted but did not consider two declarations from Dr. Paul Lee and Paul Brindell as expert testimony which showed that on the night of June 11, 2008 there would likely be shelter for only 6.7% of the homeless in Santa Cruz County. She refused to accept a statement from Harvard- educated Psychiatrist Karen Yen with a practice in Scotts Valley that asserted that " to deprive someone of sleep cuts down the effectiveness of their immune system, it leads to depression, and is very bad for the health of the person."

Frey asked Baskett point blank "Are you saying we can't entertain testimony that there was no shelter the night Mr. Facer was cited?"

Baskett said "I've made myself clear on this matter. They are not something that relates to the matter before the court. The court is not taking judicial notice of any of the matters."

Baskett explained that she was sustaining an objection from Barisone that information about shelter availability was "irrelevant" because Blindbear had testified that he "wasn't very interested in indoor shelter." This of course conflicted with his LONG testimony of his efforts to find shelter, and his experience that lead him to conclude that "trying to get into a shelter is humorous."

In closing arguments, Ed Frey read the preamble to the Constitution of the United States. He said "how does the Sleeping Ban promote the general welfare of Mr. Facer to deprive him of sleeping? How does the Sleeping Ban secure the blessings of liberty for Mr. Facer?" Sleeping really is no crime. There is no victim. All we have is an ordinance --a Not In My BackYard ordinance---which doesn't establish "justice". It established injustice!

Continuing his attack, Frey said "This court is a party to these matters. I have a right to characterize this court as a tool." Furious and flustered, Baskett abruptly ended the hearing and quickly rescheduled it for the next day.

Ed Frey brought up the 4th amendment to the Constitution which not only disallows unwarranted searches but also guarantees the right to privacy. He quoted a 20th century Justice Brandeis who when he referred to the amendment said "the right of privacy is the right most highly cherished by a civilized people."

Frey pointed out that the California State Constitution explicitly defends the right to privacy and its preamble that says that "all people are by nature free and independent, enjoying life, persuing and obtaining safety, happiness, and privacy."

"In the California Constitution article 1, section 17 says that "cruel or unusual punishment may not be inflicted. There is no victim, no injury to justify this cruel punishment. The law deprives him of sleep and in turn denies him of his health. And ultimately will deny him of life."

Commissioner Kim Baskett, confused as to why Blindbear hadn't simply gotten a form letter from the Homeless Services Center attesting that there was no shelter on June 11, 2008 as he had done on 2 or 3 citations in her court before as "that is the habit and practice of this court." There is customarily no available walk-in emergency shelter for able-bodied males between March 15th and November 15th. Barisone should know this as well. Yet Baskett insisted on this specialized reporting every time.

Baskett found Blindbear guilty and sentenced him to 6hrs of community service along with a $35 registration fee for each of the two citations, but was surprised to find Blindbear refuse her "generous" offer.

Ed Frey asked Baskett to respond to his constitutional arguments which Barisone had left mostly untouched. "I'm not responding to each and every one of your arguments. He was not interested in shelter that evening."

As a last plea, Frey asked again "Who is the victim and what is the injury?" His question was left unanswered.

Those wishing to help Ed Frey and Robert Blindbear Facer appeal his
Sleeping Ban conviction can contact Ed Frey in Soquel, Ca. at (831) 479-8911
and offer financial support, labor, or other kinds of support.
Posted by Becky Johnson at 7:14 PM