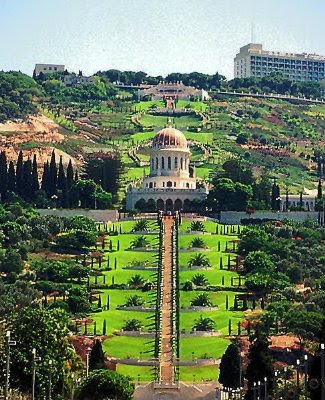 NOTE TO READER: If the State of Israel had banned the Jerusalem Post for publishing a photograph of the Baha'i Temple in Haifa, Israel, the leftists would be up in arms, charging censorship, government oppression, and would accuse the government of violating the right of the people to freedom of the press. Instead we hear a deafening silence. ---Becky Johnson, editor

Iran's Shiite cleric-led regime views the Baha'i religion as heretical and has banned it since the 1979 revolution. The photo also gave Iran's leaders an opportunity to silence the Hamshahri daily, which mostly reports on social issues but which has been critical of President Mahmoud Ahmadinejad.

Ahmadinejad's June re-election has been challenged by opposition activists and others who say massive fraud deprived the hard-line president's main pro-reform challenger of victory. Since then, the government has crushed street demonstrations, closed critical media outlets and silenced reformists with a mass trial.

Hamshahri was ordered closed by the Press Supervisory Board, a government agency run by hard-liners, for printing an advertisement containing a photo of a Baha'i temple that encourages tourists to visit the shrine, the official IRNA news agency reported. 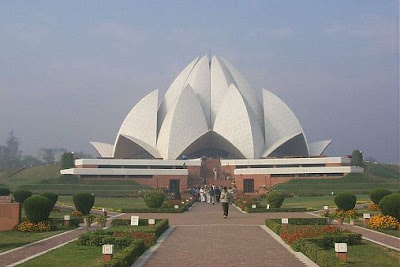 PHOTO: The photo banned was of the Baha'i temple in New Delhi, which is in the shape of a lotus, and was on an advertisement paid for by an Indian travel agency encouraging tourism to India. The "Lotus Temple" was built in 1986 and receives 3 million visitors per year. Photo courtesy of grant.org

The newspaper's director, Ali Reza Mahak, said he has received no order to close and was preparing to publish Hamshahri's Tuesday edition. But Deputy Culture Minister Mohammad Ali Ramin later confirmed to Iran's state TV that Hamshahri has been ordered closed.

The IRNA report said legal authorities would investigate the newspaper, which is run by Tehran's municipality and supports the capital's mayor, Mohammad Bagher Qalibaf, a moderate conservative who has long been a rival of Ahmadinejad.

Iran's hard-line judiciary has shut down more than 120 pro-reform newspapers and jailed dozens of editors and writers on vague charges of insulting authorities since 2000.

The closure order was also a message to Iran's estimated 300,000 Baha'is.

Authorities have launched periodic crackdowns against Baha'i followers, and state-run media often run articles denouncing the religion, which was founded in the 1860s by Baha'u'llah, a Persian nobleman considered a prophet by the Baha'is.

Islam considers Muhammad to be the last of the prophets.

Iran had been the cradle of the Baha'i faith in the middle of the 19th century. But it has not been recognized in the Iranian constitution as a religious minority since the 1979 revolution toppled the pro-U.S. Shah Mohammad Reza Pahlavi and brought hard-line clerics to power.

Seven Baha'i leaders have been in jail since May 2008 on charges of endangering national security for allegedly proselytizing. Leaders of the minority faith, however, say they are being persecuted by Iran's government for their religious beliefs.

Posted by Becky Johnson at 8:24 AM