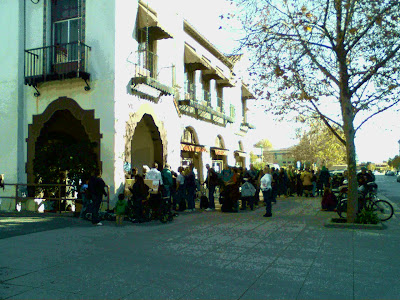 HUFF Photo: Hundreds line up for a free, Thanksgiving meal at the Vets Hall in Santa Cruz, California, November 26, 2009

A program of the County Health Services Agency, Division of Public Health

On December 21, 1999, homeless individuals, community and family members, and homeless service providers held the first memorial service to honor individuals in Santa Cruz County who had died while homeless during the past year. Names of individuals to be memorialized were collected through an informal process and came from several sources, including records of HPHP, other homeless service organizations, and individuals in the community. At that time, no organization maintained a centralized record of homeless deaths. In years since, the annual effort to track homeless deaths in the county has been formalized and made routine.

The 2009 report and homeless memorial service marks our community’s eleventh year of collecting data, reporting on homeless deaths across the county and holding a service.

How data on homeless deaths are collected:

Throughout the year, a public health nurse at HPHP maintains a log of deaths occurring among homeless people in Santa Cruz County. The log includes information on confirmed deaths of HPHP clients, as well as confirmed reports of deaths received from other homeless service organizations, medical providers, and friends or family members of those who have died. The log also includes death certificate data compiled by the County Office of Vital Statistics, and data obtained from the County Public Administrator’s office.

The data available from this process most likely under-represent the number of homeless deaths in the county. Housing status at the time of death is neither well documented nor always easily determined. Also, information on likely factors leading to death is imprecise, and is often unknown at the time of death. For the sake of summarizing the information, we have assigned a single primary contributing factor to each death, but in many cases, there are multiple significant factors that have contributed to an individual’s death.

For this reason the data provided in this summary should not be interpreted as a definitive accounting of deaths among the homeless population in our county. Instead, this reflects our best effort at this time to collect and analyze accurate data on homeless deaths in a way that is meaningful to homeless service providers, to friends and family of those who have died, and to people who are housed and homeless in the community at large.

Homelessness causes, complicates and exacerbates serious health problems and it leads to the premature deaths of thousands of people in our communities across our nation every year. This fact is well documented. Research in the U.S. has shown that homeless persons have up to a threefold increase in mortality when compared to the general population, (Hibbs1994). Studies document an average age of death among homeless populations that ranges from 42 to 52 years, while average life expectancy for most Americans is almost 80 (O’Connell, 2005).

Our purpose in preparing and distributing this report at this time of year is two-fold; first to honor and mark the passing of all those who were homeless and have died in our community during the last year, and second, to document and increase awareness of the serious negative impact of homelessness on the lives of our fellow community members.

Our memorial service includes a reading of the names of the forty-seven people reflected in this report, and also the names of formerly homeless individuals, now housed, who died during the year. We also continue our tradition started last year of creating and displaying homeless memorial flags with the names, ages and year of death for each homeless or previously homeless person who died since December 21, 1998. This year that eleven-year total will exceed 400 people.

Nearly all of the people who died were personally known to one of us at HPHP, or to one of our colleagues at homeless service organizations throughout the county. We are saddened by their deaths, and each will be missed. We hope this information will serve to honor their memory, to guide us in our ongoing efforts to improve the health and quality of life for people while they are homeless, and to recommit ourselves as a community to ending homelessness in Santa Cruz County.

5) LOCATION AT TIME OF DEATH:

Posted by Becky Johnson at 2:23 PM