Santa Cruz, Ca. -- Homeless United for Friendship & Freedom participated in the Human Rights Fair at Louden Nelson Community Center for the 2nd year in a row. This year, Robert Norse received an e-mail from the organizers of the event inviting HUFF to participate in the Holiday parade. We were told we would be marching with the United Nations Association of Santa Cruz County and were told where and when to gather.

Here is the text of the e-mail Robert Norse received after contacting the UN Association of Santa Cruz County stating HUFF's intention of participating in the Human Rights Fair.


Instructions for Booths
Thank you for participating in our Second Annual Human Rights Fair. I am enclosing a copy of all the events that weekend. Also enclosed is the list of the booths in the three rooms.
Louden Nelson Center is open on Saturday Dec. 5 at 9 am. You can get a parking permit at the office if you need to leave your car more than two hours.
Please have your booth set up by 11 am and close up at 5.45 since we need to clean up.
There will be a Human Rights contingent in the Holiday Parade under the auspices of the United Nations
Association near the beginning of the parade. Please join us if you can. The Fair officially opens at 11:30 am.
There will be plenty of inexpensive delicious food made by Heavenly Nibbles in room 3.
If your organization is marked with an asterisk, it means we have not received your check. If there is a question mark , we have not had a confirmation from you and you may lose your table.
Please send your check to UNA % Pat Arnold 181 Branciforte Ridge Santa Cruz 950065. Call me at 425-7618 if these instructions are not clear.


On the morning of the parade, eight HUFF members assembled wearing winter clothing, scarves and earmuffs to have a carolers look. Our plan was to sing Christmas Carols which we had rewritten to have a local theme. HUFF has done this in the past, with such favorites as "Away on Vacation" "Joy to the World, its time to shop," but this year we added "Sgt. Harms is coming downtown." Robert Norse wore his dress bathrobe in solidarity with homeless people who must perform their toiletries in public places, and sporting a teddy bear, walked up and down the crowds passing out HUFF flyers. 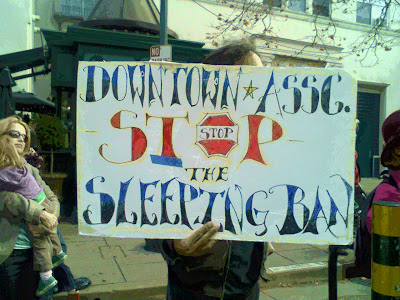 As we entered the parade, Chip, the Executive Director of the Downtown Association approached us telling us that we weren't allowed in the parade. Robert explained that we had indeed been invited and that we were a paid participant later that day at the United Nations Association of Santa Cruz County's Human Rights Fair at Louden Nelson Center. Chip backed of and let us pass.

Shortly into the parade, a yellow "thing" pulled in line behind us. It was driven by a man dressed as Santa Claus and had the words "Caterpillar" in black on the passenger-side front end. The driver repeatedly gunned his engine causing excessive noise and car exhaust to fill the parade route. One HUFF members walked back and asked the driver to stop as the fumes he was generating were aggravating his asthma. The Santa-driver just smiled and waved and kept doing it.

We sang the same two songs over and over again while "Vision Song" Valerie Christy played guitar. The other song we sang was "God Rest Ye Merry Gentlemen, but not in Santa Cruz" which included these new lyrics by Joe Schultz:

"In Santa Cruz we often fight for peace throughout the world,
Discrimination isn't us, just keep your bedroll furl'd,
Progressive politics with anti-poor laws swirled,
---Bad tidings, not comfort or joy, comfort or joy...."


As we passed Soquel Ave., a woman in a tee-shirt with a "I (heart) the Santa Cruz Police" bumper sticker plastered across her belly, pulled along side of us. She had a megaphone in her hand and she matched her pace with us singing very loudly and very badly into her megaphone. Between stanzas of "Santa Claus is coming to town"she enthusiastically shouted "I love the Santa Cruz Police Department!! Oooowhh!" At first I kept pace with her and sang OUR song side by side, but she quickly outdistanced me (I was still getting over a flu, so my lungs weren't in the best of shape). So I hung back and sang two lines for every clump of parade watchers. I wasn't filming anymore, just letting the camera pick up the sound.

Since she had drowned out our voices, I just wanted them to hear a little bit of what had been singing. Words that apparently had to be censored, harassed, and drowned out.

"The sidewalks are for business use, so don't delay or sit!
We've friendly cops with ticket books, three hundred bucks a hit" 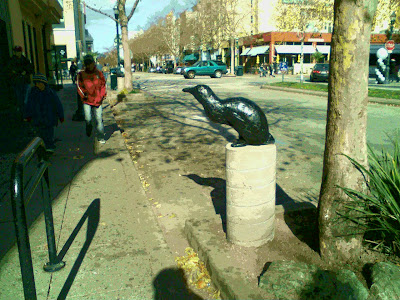 Later, en route to the Louden Nelson Center where the HUFF table was set up, I sighted the new Penguin sculptures on Pacific Ave. I immediately understood why Ryan Coonerty had pushed to have a new ordinance forbidding sitting, begging, setting up a political table, or playing music for donations within 10 feet of a statue. At the time, I had shook my head at the idiocy of it. I mean a real, live musician playing in the downtown is forever silenced to acquiesce to the possible need of a passerby to gaze at a stony statue unobstructed? When I found out the entire downtown was being used as gallery space for a for-profit gallery, and that sculptures were being installed up and down the avenue, I realized that this was art being used as a tool of social cleansing, via our own Redevelopment Agency.

I resolved to organize a boycott of the artists whose work is displayed downtown.

Many different groups set up a booth as part of the Human Rights Fair. We gathered signatures on petitions, and shared Chai, hot chocolate, and 7-11 Cappuccino, and signed up people for our HUFF yahoogroups mailing list. 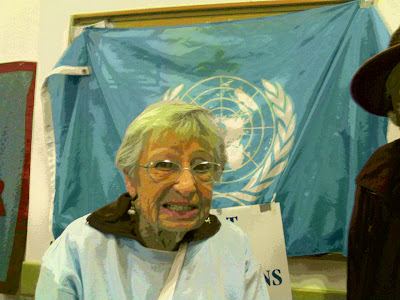 Ruth Hunter, longtime social justice activist and peace worker greeted most folks by the door. In 1997, Hunter supported HUFF's effort to put repeal of the Sleeping Ban onto the ballot for a citywide election. Despite endorsements by SCAN, WILPF, the UN Association of Santa Cruz County, the effort fell short of the necessary 10% of verified signatures needed to qualify for the ballot.

When American Civil Liberties Union member, Mayor Mike Rotkin spoke on behalf of the ACLU, HUFF members watched and listened. Later when Rotkin sat down in the audience to listen to the remaining speakers, Robert Norse and Curbhugger Chris joined him with signs about the Sleeping Ban. He didn't stay long. 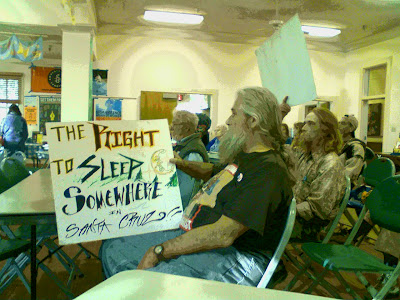 We talked to many who came to the Human Rights Fair. Most of those who came and talked to us had nothing but positive things to say about the work HUFF does to affect the City's homeless policies. Around 5PM, Robert Norse spoke to the remaining audience members and 4 HUFF members joined him to sing our songs one more time, this time without being drowned out by megaphones or revving engines. The audience loved it!

On December 6th, I read in the SENTINEL the following passage in an article entitled "Holiday Parade brings cheer to downtown Santa Cruz" by Alia Wilson:

"Adding to the Santa Cruz flavor, members of the Homeless United for Friendship and Freedom group crashed the event to protest the downtown sleeping ban. The eight protesters passed out fliers as they strolled Pacific Avenue, but many families did not take note of the display as the sounds of the parade filled the air.

"At some point, they were complaining they couldn't sing, that they weren't allowed to and that it was against human rights," Krista Lazier of Santa Cruz said. "It seems like their message could have fit with the parade but it was odd."

HUFF did not "crash" the parade, per the e-mail posted above. And the "sounds of the parade" were the gunning of a motor and a woman with a megaphone trying to shout us down!" So that way, the SENTINEL makes us the culprits when they should have portrayed us as the victims. So much for the newspaper of record!!
Posted by Becky Johnson at 9:58 PM