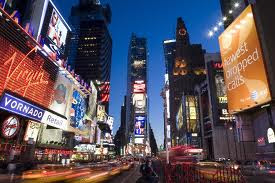 Times Square, New York City, one of 1,700 parks and plazas
where smoking will be banned under a new City ordinance.

That is the reality behind the city’s impending ban on smoking in public areas like parks, beaches, and public plazas, including the large one in Times Square. The law is considered one of, if not the widest reaching smoking ban in the country. But you can expect no new police staff will be added to enforce it. 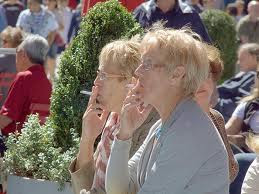 Councilwoman Gale Brewer, the bill's main sponsor, said that she anticipates the ban will mostly be self-enforced by New Yorkers, according to the Associated Press. Basically, one New Yorker lights up in a park, the next one is irritated by the smoking and says: “I’m going to report you to the police.” The smoking New Yorker is then scared into putting the cigarette out or leaving the park.

Certainly less smoking or no smoking is good for New Yorkers’ health; but think about it— what kind of New Yorker reports a fellow New Yorker for smoking a cigarette outside in the open air? Not one I would want to be around.

And this could just be the beginning. The City University of New York is planning to ban smoking on all of its campuses next year.

These bans do not seem like a move to truly improve the quality of life in our city, like the ban on smoking in restaurants and bars in 2003, but rather like an antiquated, big brother-ish move by city officials hoping to impress themselves and others with what they have accomplished.

Smokers enjoy cigarettes on
a New York City balcony,
an activity that is now banned
under the new ordinance.
I am a non-smoking political independent. The unfortunate reality is that politicians survive off of laws and bills and coming up with new and ostensibly better ways to govern. The truly great politician will be the one who is willing to once in a while approach governing from the perspective of reducing laws and appealing to a higher power, whether that be public awareness, capitalist forces, fate, faith, or (if you prefer a smoking theme) the inextinguishable flame of integrity that lights the human spirit.

“By voting to prohibit smoking in all 1,700 City parks and 14 miles of beaches, the City Council will help us protect more New Yorkers from the harmful effects of second-hand smoke – particularly children who suffer from asthma,” said Mayor Michael Bloomberg in a statement.

But, instead of creating more laws to reduce the chance of second hand smoke in public areas, why not focus on creating more public area for New Yorkers, smokers and non-smokers alike. It actually wouldn’t be that hard at all since large portions of park space in the city are often closed off from the public.

Most of my trips to Madison Square Park with my wife and two kids have been filled with comments on what a complete waste the usually fenced off lawn area is. Sure, the grass is well kept and pristinely green, but most of the time it is off limits to the public.

The closed off grass is like our city lawmakers, trying to look so perfect but really just doing this city a disservice.

In accordance with Title 17 U.S.C. Section 107 and The Berne Convention on Literary and Artistic Works, Article 10, the news clippings, audio, and images used in this posting are made available without profit for research and educational purposes.

Posted by Becky Johnson at 2:22 AM