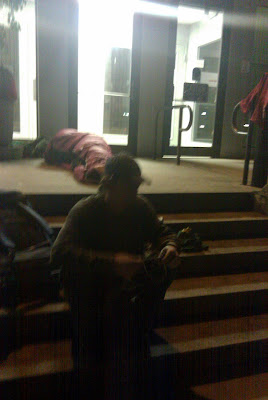 One of the protesters at Peace Camp 2010 lies down for the night
literally on the front doorstep of the Santa Cruz County Courthouse.
Photo by Becky Johnson August 29, 2010
by Becky Johnson
March 5 2011

Santa Cruz, Ca. -- Yesterday, the newly-elected Judge, Rebecca Connolly faced her first decision regarding the case of Linda Lemaster and the Peace Camp Six. All had been arrested under the State's draconian 647 (e) statute which outlaws "illegal lodging" with the word "lodging" undefined.

Representing Linda Lemaster, Public Defender, Mark Garver had submitted a brief and gotten a response to his brief, at a hearing called a demurrer. Connolly said she'd reviewed both briefs. Garver began by addressing the two cases raised in the Prosecution's brief, both of which addressed camping ordinances. What follows is my version of what I heard, based on my notes and conversations I had with Ms. Lemaster afterwards.

MARK GARVER: In the cases cited by opposition, Joyce v City of San Francisco, and in the People v Scott, in both cases, the statute further defines the behavior addressed. 647 (e) is vague and overbroad. What does it mean to violate it? Does it mean or specify lying down? In Joyce, it states specifically that "merely lying down or sleeping in a bedroll does NOT constitute a violation."

In the People v Scott, it does define "camping" as well. " Camping" is defined as residing or resting in a park for long repetitious periods of time. Your Honor, this is a tangible definition.

Under PC 647 (e) it's not clear if a person violates the statute after one-half hour, or 10 minutes, or after a period of days. Even in the language of the courts on ruling on the W. Hollywood (camping) ordinance, the Justices said "If the City of W. Hollywood had not provided a definition of "camping" they would not have found their ordinance constitutional."

But here, the opposition expects us to merely substitute the word "lodging" for "camping."

What's illegal is using that claim as a living accommodation sufficient to provide guidelines to police to enforce what lodging is. Can we tell what "lodging" is after 5 minutes? Ten minutes? One-half hour? Is it for lying down? Is if for sleeping? This lends itself to arbitrary enforcement by police, or so said the Hawaii Supreme Court when they reviewed the ordinance.

DISTRICT ATTORNEY MCKINNEY: I just saw this case today so I'm not going to respond to those arguments.

MARK GARVER: The Hawaiian decision was different from the Scott decision in that it was "camping" and it did have a definition of "camping." Still it was found vague for other reasons. It defined what "living accommodations" were. It said that's "remaining for a prolonged period not for recreational use." Here we have no definition of "lodging."

And if "lodging" can be defined as someone who stands, sits, or publicly assembles in a protest, it can be used to disperse that protest. I am challenging this ordinance on its face as well as as applied.


DISTRICT ATTORNEY MCKINNEY: In the Hawaiian case, I haven't had the chance to review it all but I don't think you should give it much weight. In Joyce, it details a 647 (i) which is virtually identical to (j) --and they found it was NOT unconstitutional. As for over-broad or unconstitutional, that was not addressed in the counselor's response.

JUDGE REBECCA CONNOLLY: I can't believe this statute is vague. Regarding Constitutional issues, I don't think it's so vague it would influence the 1st amendment. How about the ruling in Scott where they said that "If they'd had a definition...?"

JUDGE REBECCA CONNOLLY: I find the statute as written is sufficient on its face.

With respect to this case, Judge John Gallagher is handling all the camping cases.

MARK GARVER: So for all purposes that means Department 2?
JUDGE REBECCA CONNOLLY: Yes. Judge Gallagher. Next hearing March 11th at 8:30AM., Dept. 2. I want to thank everyone here. It was very well argued by counsel. Thank-you for your attention to detail. I'll assign it to Dept. 2 in Judge Gallager's court.
Posted by Becky Johnson at 1:22 PM