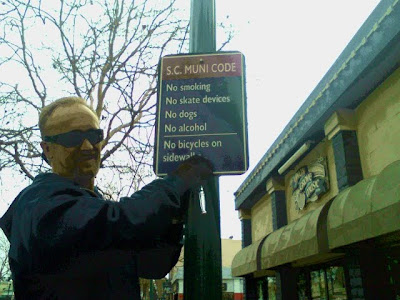 London, England -- With Britain vying for pole position in the tobacco control freak race with its zany plain packaging/display ban proposals, reigning champion California is having to raise its game. Can it rise to the challenge? Of course it can...

Smoking on open patios and balconies will be prohibited for the 18,500 apartment and condominium residents in Laguna Woods if the City Council on Wednesday gives final approval to an amendment to the city's smoking ordinance.

Yes, that's an outdoor smoking ban on your own private property. And even that doesn't go far enough for the illiberal goof-balls of this clown state.

The council also considered prohibiting smoking inside homes unless all windows and doors of the units are closed, but tabled that provision for further study.

"We are not yet ready to regulate smoking within houses," said Mayor Pro Tem Cynthia Conners.

Don't mistake that for 'we don't want to' or 'we would never'. They're just not ready yet. The baby steps of prohibition have got them this far, so why start taking bigger strides now? There's plenty of time for smoking bans in the home, don't you worry.

Meanwhile, up the coast in Santa Cruz...

The Santa Cruz County Board of Supervisors voted 4-1 Tuesday to require retailers to obtain a license to sell tobacco, joining dozens of other communities statewide.

The county says a recent survey demonstrated county retailers' poor compliance with laws prohibiting sales to those under 18. "It shocked everybody," said Bob Kennedy, the county's environmental health director.

It would be interesting to learn where this shocking study came from and who funded it but, I guess we should all be thankful that this licensing system is going to stop retailers selling cigarettes to kids, um, somehow. How exactly will that work again?

The new license applies to all of the county's 104 retailers who sell cigarettes, and will cost $318 annually.

So you can't sell cigarettes to kids unless you can scrape together $318 a year? That should stop 'em.

That $318 is the whole point, of course. It won't stop shop-keepers selling tobacco to under-18s but it will penalise tobacconists in the hope that some of them will say 'screw it' and stop selling cigarettes. Places that don't sell many cigarettes will do that, for sure, and prohibition takes one step closer.

The whole point of the exercise is to make selling cigarettes less profitable and make buying cigarettes more inconvenient. That's why it's been on the anti-smokers' agenda for some time. It's got sweet nuthin' to go with youth access which, as ever, needs to be addressed with enforcement. Speaking of which...

The county hopes to run at least one compliance check on businesses per year, with first-time violators facing a 60-day suspension of tobacco sales.

Those who are cited four times over five years can lose their tobacco licenses.

If stopping kids buying tobacco was really these people's concern, they'd be doing all this already. They don't need to charge store-owners several hundred dollars a year for a junk license before they start enforcing the law. Or is the State of California seriously claiming that it doesn't already get enough money from cigarette taxes and the Master Settlement Agreement to afford doing a measly one check a year?

And finally, back down the coast in Los Angeles, Bernard Parks is doing his stuff. Parks is a supremely stupid man with totalitarian tendencies who believes that "secondhand smoke is the number one cause of preventable health disease in America". He also believes that "inhaling secondhand smoke is more harmful than actually smoking". If this is the kind of bumpkin that gets elected (and re-elected) in California these days, then it's no wonder the State has become a bankrupt citadel of intolerance.

Parks' previously efforts to turn LA into a bully state include an outdoor smoking ban in the city's streets and he has now turned his beady eyes—as they all do sooner or later—to food. As the video from Reason shows below, he's going to ban restaurants he doesn't like. The fact that LA residents obviously do like them doesn't enter into it.

With San Francisco banning Happy Meals and New York putting a tax on soda (thanks to Michael Bloomberg, another smoking ban obsessive who took the 'next logical step'), this is only the start of the war on food. For the time being, Bernie Parks is only going after the fast food joints. As they might say in nearby Lacuna Woods: "We are not yet ready to regulate eating within houses."

Posted by Becky Johnson at 9:18 AM