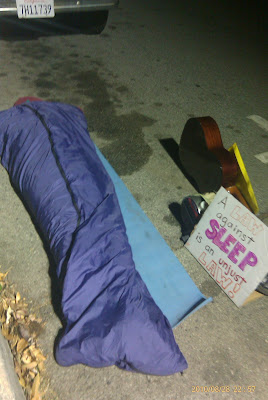 Peace Camp 2010 defendant, Gary Johnson, sleeps on a public sidewalk August 29, 2010 to protest the Sleeping Ban. He faces up to two years in jail if convicted for his multiple charges of sleeping and "lodging."
by Becky Johnson

Santa Cruz, Ca. -- As the State, County, and City struggle to meet record budget deficits, there are two local leaders of City and County government who know no limits on what they will expend on their budgets. And this despite any evidence these expenditures produce any public benefit other than to feather their own nests. They are City Attorney John Barisone and the District Attorney Bob Lee.Both proceeding at breakneck speed to prosecute homeless people for...well...for BEING homeless. And the sky is the limit as far as costs go.

Now logic tells us that if some guy doesn't have $100 for a motel room, he's not going to be able to afford a $97 citation for sleeping on public property. Nor will turning him into a criminal help him find housing or employment.

But that's standard operating procedure in Santa Cruz. The City has MC 6.36.010 section a, also known as the "Sleeping Ban,"for which around 60 citations are issued monthly. The County has its own Camping ordinance, but it doesn't apply to the Government Center properties.

Last August, Santa Cruz County Sheriff's made a series of arrests under PC 647 (e), the Statewide anti-lodging statute which provides immediate arrest and jailing for those who don't possess a deed to a piece of property, a mortgage on a house, a lease on an apartment, a rental agreement, or a receipt for a motel room if they are found within the borders of the State of California and a cop tells them they no longer have "permission."

And if it is TRULY illegal to "lodge" which, according to Assistant District Attorney Sarah Dabkowski, representing the people, the law "puts people on notice that they can't lodge, can't live, can't stay the night, can't sleep somewhere, can't set up roots somewhere if they don't have permission." Dabkowski is prosecuting the Peace Camp Six who laid down their bodies on the court house steps as part of a protest last July and August to challenge laws which criminalize sleeping at night. Laws which are disproportionately directed at displaced former tenants and not against truck drivers, cabbies, kids waiting in line overnight for the opening of Star Wars: Episode III--Revenge of the Sith, or against those sleeping inside upscale-looking motorhomes.

The Peace Camp Six are five houseless individuals and their attorney, Ed Frey. Frey made a motion to dismiss the charges based on the vague and overbroad language of the statute which can make "living" without permission an arrestable offense. A three-judge panel, headed by Paul Marigonda, and joined by Judges Paul Burdick and Timothy Volkmann, met in chambers and voted to deny the motion. DA Dabkowski, has subpoenaed 28 to 30 sheriff's deputies, police officers, staff members at the Santa Cruz County Courthouse and Government Center to testify with jury selections to begin on Monday, April 25th at 9AM in Dept 2 before Judge John Gallagher.

A separate jury trial is likely forthcoming in the case of a seventh defendant, Linda Lemaster,who also faces trial beginning early in May. She is being defended by attorney Jonathon Gettleman, who defended Miguel Deleon against the City's civil injunction for sleeping in the downtown area. Neither City Attorney John Barisone nor District Attorney Bob Lee have any compunctions about performing jury trials, calling dozens of witnesses who are paid staff of both the City and the County, paying their own staff for hundreds of hours billed at between $215 and $225 and hour to prosecute homeless people for "living" "staying the night" "sleeping" or "lodging" in a public place where they are not trespassing.

It goes to say, that a fraction of these costs could be used to house, feed, transport, and provide job training the very same people who lack a permanent shelter and hence tend to be subject to these and other laws.

Facing trial on Monday are Eliot Anderson, Arthur Bishoff, Collette Connolly, Christopher Doyon, Gary Johnson, and Ed Frey. If all are found guilty, what does anyone "win?"