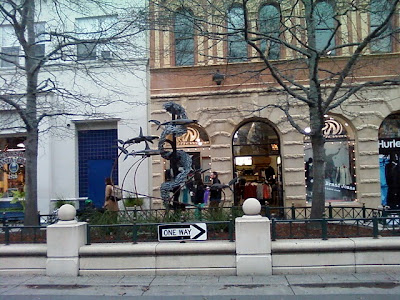 Santa Cruz, Ca. -- The only wrinkle is that there were only two judges. Otherwise, all was the same as before. In the Robert Norse/Robert Facer 'Song-Crime' appeal, a Santa Cruz County Superior Court appeals panel sustained their conviction last September for having sung a few songs on Pacific Ave. on January 6th, 2010. And, in a carbon-copy rationalization, they insisted the defendants had sung "for four hours straight" on a public sidewalk in downtown Santa Cruz.

"Commissioner Basket concluded that the length of the protest, the fixed location, an electronic organ, a drum, a guitar over a period of 4 hours constituted unreasonably disturbing noise," Judge Paul Burdick offered as proof of his decision. The problem was, we didn't sing for four hours. In fact, we sang on and off for a little over an hour at an event we had announced in advance would last two hours. Nor did any other witness testify that we sang that long, that we were too loud or too annoying. In fact, Commissioner Basket had to have ruled that the sole witness--the citizen complainant cum "witness" Sean Reilly was the ONLY reliable witness. For seven eye-witnesses testified that no one from our group even got to the location until 1:30PM and that no one even began to sing until 1:45PM.

Baskett must have ruled that the 7 witnesses testimony in court under penalty of perjury was unreliable. For at an appeals hearing, only testimony by the winning party is considered.

However, Baskett did not entirely discount the testimony of the eyewitnesses who claimed to have been in a meeting several blocks away until 12:30PM--one and a half hours AFTER Reilly claimed he heard "the same group singing," at the fixed location.

Baskett used this "evidence" of a prior meeting where we included in our planning, a plan to include music as part of the protest, to convict Robert Facer. For Facer never sang a word on January 6th but was convicted of "unreasonably disturbing noise,"according to Baskett, for engaging in a conspiracy to create an unreasonably disturbing noise when she alleged that we PLANNED to disturb the staff at Bookshop Santa Cruz---a conclusion she made up wholly since no one on either side testified to that claim.

Judge Paul Marigonda concurred with Burdick's preliminary decision but eagerly agreed to certify a further appeal to a higher court--unusual in infraction cases.

Attorney Ed Frey, representing Robert Facer argued that the statute in question needed to satisfy two tests. "Brown established for all political protests, that unless the speech presents a clear and present danger of immediate violence or the protest is intended solely to disturb, that the speech cannot be abridged. Neither of those conditions were met by this protest. So how do you get around the first amendment?"

Burdick explained why his ruling was reasonable. "I believe Brown involved a protest on a University campus," he ventured. "Here, people were occupying space in a commercial business district, and people's conduct could interfere with people coming and going, and since their were apartments upstairs, people attempting to peacefully enjoy their homes."

Ed Frey challenged Burdick's claim. "I don't see anything in here saying it's on a college campus. What if the protest were set up on a vacant lot next to the University? Are you saying that their 1st amendment rights wouldn't apply there?

"Streets and parks have been places where we traditionally peaceably assemble, where we communicate out thoughts, since ancient times. And in this case, the defendants were in the Free Speech Zone on a public sidewalk. If they couldn't practice their 1st amendment rights there, where could they?"

Too bad Judge Ariadne Symons, not present due to a sudden family emergency, wasn't there to tell us we "could sing in a park."

"As for the complaining witness, Ed argued, "Sean Reilly lived at that location for four years. He knew what to expect when he goes home. Are you saying that a single citizen can veto the 1st amendment?"

Sean Reilly takes a break from one of many hearings outside of Commissioner Baskett's court as he testifies against four people for singing. Photo by Becky Johnson

"As to determination of credibility, the trial court judge had to determine was that witness reasonable. There is nothing on the record to say Mr. Reilly's testimony was not reliable."

"All your arguments are well taken including details from the conviction of Becky Johnson," Burdick continued. "The court found a person has the right to be free from being disturbed in their home. Courts must do a balancing act and determine if sufficient evidence exists of a violation occurring."

Despite this rule, Ed Frey addressed the defense sworn testimony. "This court seems to be depending in part at least on the length of time the music was played. Every one of the defendants testified they sang an hour and a quarter at most."

"We can't address any facts in dispute, " Burdick apologized.

"But these facts are not in dispute, Frey concluded. "The witness, Sean Reilly testified that he did not look out the window until 2 PM. This is not a fact in dispute. The City has not proven its case and this conviction should be overturned."

Robert Norse, appearing pro per, introduced himself as "a writer and an activist." Norse who is not an attorney addressed the finding that singing is not a necessary component to speech.

"It would seem that the court finds that singing anywhere at any time could be outlawed, and that would tend to disallow singing on all occasions. This ruling affects not only us, but all performers, activists, musicians and the audiences we interact with --and it is the law that is at issue. Which act provides a violation? I didn't know. Ms. Johnson didn't know. And when we asked Officer Schoenfield repeatedly, SHE didn't know or couldn't tell us."

Then Norse addressed the first part of the ordinance. The section which addressed unreasonably disturbing noises between 10PM and 8AM. Norse pointed out that THIS section of the municipal code does address residents and sleeping quarters. So why were the defendants convicted for what might have been a violation of the after 10PM ordinance?

Burdick assured Norse that they 'd already read and considered all written arguments. And that the time had expired. "Does a day sleeper have a reasonable expectation of privacy?"
Posted by Becky Johnson at 7:02 PM