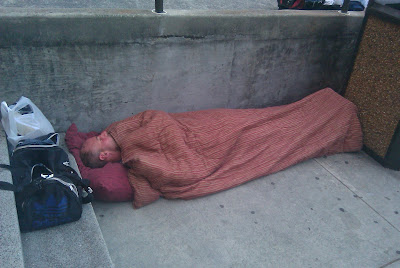 Santa Cruz, Ca. -- Art Bishoff is doing better these days. Last summer, he was homeless and jobless and sleeping on the streets. Today he is housed (barely) and works 70 -80 hours a week at minimum wage. Last summer he was arrested as part of Peace Camp 2010 to protest Sleeping Bans. Today, he appeared before Judge John Gallagher to be sentenced for "illegal lodging," a misdemeanor offense.

Now two other defendants, Gary Johnson and Ed Frey, had been sentenced on June 10th to 6 months in jail and $50,000 bail when they refused 400 hours of community service and 3 years of probation for Sleeping as part of a protest against Sleeping bans. Both Johnson and Frey are currently out on bail pending appeal when Gallagher reconsidered bail and reduced it to $110. Apparently that was the bail schedule for PC 647 (e) all along.

DA Sara Dabkowski only slightly modified her demands. She asked for 300 hours of community service and 3 years probation. Attorney, and co-defendant, Ed Frey asked for a reduction "Since Mr. Bishoff is already working 70 to 80 hours a week." Gallagher sentenced him to 30 hours of community service and a combination of fees and fines adding up to $170.

"How much do you earn each month?" Gallagher asked in order to assess whether a fee reduction was in order.

Gallagher then modified the sentence to 47 hours and cleared him of the $170 fee. He charged him with 1 year probation and ordered him to not "Sleep/camp/or lodge in front of City Hall or here in front of the courthouse."

Then Gallagher gave a little speech. To Ed Frey he said, "Your people caused hundreds of hours of law enforcement dollars to be spent and others were impacted by having to view the scene. I don't need to hear any more evidence since I witnessed days and days of trial and testimony." To Mr. Bishoff he said, "I'm sentencing you differentially, Mr. Bishoff, because you were one of the few people in this protest who were not homeless-by-choice."

He praised Art's success in getting both housing and employment, seeming to show that those who violate PC 647 (e) and then somehow justify their lives after the fact to Gallagher are rewarded with a vastly reduced sentence. Gallagher also seemed to say that those who remain homeless are their "by choice" though no evidence or testimony to that effect was even raised at trial.

And are people REALLY homeless by choice? Who would leave a nice comfy home to go live on a sidewalk? All data show that the number one cause of homelessness is lack of money. And the number one reason for lack of money is the gap between the wages paid for employment and the cost of housing. Santa Cruz County has one the highest cost of housing in the country, which is hardly a "choice" homeless people make.

Yet Gallagher used this as an opportunity to lambast those who remain unemployed in an economy with an 11.5% unemployment rate or unhoused in a very high rental market by distinguishing Arthur Bishoff from "the rest."

"Congratulations on your job and on being a working member of the community."
Posted by Becky Johnson at 2:01 PM