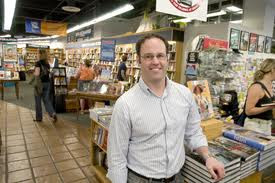 Santa Cruz, Ca. -- Now it's no secret that I am no fan of Mayor Ryan Coonerty. He personally had me banned for life from Bookshop Santa Cruz, falsely accusing me of

Mayor Ryan Coonerty in photo taken at his part-time cashier's job in his Dad's bookstore 2005.

vandalizing their bathrooms. He's a major supporter of the Sleeping Ban. He's cut oral communications at City Council meetings from three minutes to two minutes, and actually crowed that "Less speech is better speech" for members of the public. Of course, HIS time to pontificate has not been reduced one bit.

He's made huge public parking garages and parking lots into "no trespassing' zones just to drive homeless people into the rain when they took shelter there. He's made it illegal to play a flute too near a statue (MC 5.43.020 section d), which has to be one of the most ridiculous, petty, and unconstitutional ordinances passed by the City Council in recent years. And now he's been admonished for ethical violations by the The Fair Political Practices Commission of the State of California for issuing a self-serving mailer at public expense.Nor does Ryan seem to get it, calling the admonishment for an ethical violation an "honest mistake." City Manager Martine Bernal, also named for the ethical violation was even worse. HE commented that they "may have inadvertantly made a minor technical error." But many citizens thought otherwise.

Former Supervisor, Gary Patton noted the violation on his Facebook Page writing "The mailer is heavy on both boosterism and self-congratulation. Unfortunately, it appears to violate state law, which forbids the use of government funds for the promotion of elected officials." Citizen Gillian Greensite went further and filed a formal complaint. Quoted in the Santa Cruz Sentinel, Greensite said ""Apart from the illegality of the mailer, the use of public funds to send out a self-promotional piece at the same time that they are cutting city staff salaries and making budget cuts to social services seems questionable at best." HUFFies called the mailer a "glossy puff piece mailed at taxpayer expense."

Local attorney, Kate Wells wrote "And Ryan Coonerty is teaching law to our best and brightest at UCSC ??? I agree with Greensite, this was a clear violation of the law, not to mention ethics - not even a close call. I, too, find it hard to believe that Coonerty did not recognize such a basic misuse of taxpayer dollars. Either he is ignorant and should be fired from his teaching job or he is unethical and should be removed from the council."

John Cohen, a local resident wrote "The mailer was a political piece which should not have been paid for with taxpayer money. It was meant to present the City of Santa Cruz and Ryan Coonerty -- who was featured on it -- in a favorable light. In short, it was a political advertisement, not educational material. If anything, Ryan Coonerty and the City got off easy. Next time not so easy."

Nor is the statement by the Mayor the only problem with the mailer.

The reportage is highly selective. And it appears to subtly and not so subtly promote his own networking business, NextSpace, in the section titled "New Era for the SENTINEL Building" with language praising the business as "...a workspace...is now a co-working space, allowing innovators from different fields to mingle and collaborate."

The "Teen Center" piece shamefully rides upon the glam of American Idol local, James Durbin, who used the center before the current council gutted its funding.

The section "Teens Take PRIDE in Santa Cruz" is a puff piece about a single police/youth program that affects an unknown number of teens. It ignores rising rates of violent assault, an unusually high rate for rape, and a growing problem with gang violence.

And It does NOT report that the City has chosen an expensive and unlikely to be successful appeal to the US Supreme Court a 14 - 0 ruling from the 9th Circuit Court of Appeals. It doesn't include any mention that City Hall has been turned into a "no trespassing" zone for the first time in 145 years or that a protester set fire to the City Attorney's office. It doesn't mention the May 1st Riot of 2010 which caused $100,000 in damage.

And it DIDN'T mention any other member of the Santa Cruz City Council, nor was the language approved by the full council. Of course this is not the first time Mayor Ryan Coonerty has mis-used his office for political pandering.

HERE is the portion of the mailer that violated the rules of the Fair Political Practices Commission:

A Breathtaking Year in Santa Cruz

2011 has been a breathtaking year in Santa Cruz. We’ve hosted incredible events: the Giants World Series Trophy tour, our American Idol, James Durbin’s hometown visit, the Sacred Craft Surfboard show downtown and celebrated UCSC’s 45th and Plantronic’s 50th Anniversaries. And we are only half done.
I speak for everyone on the City Council when I say that we would not have it any other way. Our city is extraordinary. Not only are we surrounded by redwoods and waves, but we are a small town with big ambitions — to be a model of environmental awareness; a home to world class teaching and world changing research and a center for businesses, large and small, to innovate and succeed. We are a hub for arts and culture and a place where millions of families visit each year.

In order to ensure that these aspirations are achieved — as well as vital day-to-day services provided — this winter, the City Council developed a strategic plan for the next three years. We committed to these five goals — linked to your left — and 33 ambitious measurable objectives upon which we will report back to the community each and every year. This Annual Report is the initial outline of how we are doing as a city and where we hope to head and how you can be a part of making our community a better place.
To support these goals and objectives, in the coming months the Council will adopt a budget that reduces an $8 million structural deficit while maintaining essential city services. We will develop an ambitious Climate Action Plan that moves us toward sustainability and creates green jobs, advocate that the Coastal Commission approve the Arana Gulch and La Bahia Hotel plans, attract and retain businesses, and continue to focus on public safety challenges.
Please take a moment to read the report linked below in English and in Spanish. Let us know what you think and how you might be able to contribute. It’s going to take all of us collaborating and innovating to succeed. We have done it before, and I have no doubt we will do it again in the imaginative and vibrant way that Santa Cruz does best.
--Mayor Ryan Coonerty

RETURN TO SENDER We recently dinged the city of Santa Cruz for spending $15,000 to send out an annual report touting civic accomplishments, while also setting out the city's vision for the future. The flier came out while the city was asking workers for salary and benefit concessions, and during a week the City Council cut the money going to local nonprofits. The mailer, it turns out, also was illegal. The state agency charged with enforcing California's political ethics law last week admonished the city for the mailer, saying it broke rules governing the use of public funds. The flier included a note authored and signed by the mayor, and state law prohibits government agencies from paying for mass mailings that feature elected officials. Mayor Ryan Coonerty, who conceived the flier, called it "an honest mistake," but it's hard for us to understand how this one ever passed a simple smell test. It also was never run by the city attorney. No fines will be assessed, because the city self-reported the violation, but we expect more due diligence from city leaders.