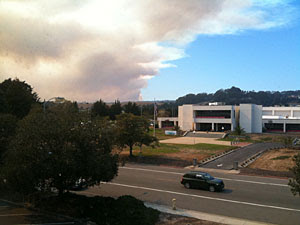 Can we justify our persecution of tobacco smokers by claiming justification as a health hazard?
By Becky Johnson
August 7, 2011

Santa Cruz, Ca. -- On October 8th, 2009, the City of Santa Cruz' 'Smoking Pollution Control ordinance' went into effect. Pushed by Vice-Mayor Ryan Coonerty and City Councilmember, Don Lane, the ban outlawed smoking in wide swaths of public and private property throughout the City. The reasons given were for health reasons and because of tobacco litter.

While smoking tobacco and marijuana were explicitly banned, not all forms of air pollution were addressed. In fact, most weren't.

Air pollution in the City of Santa Cruz contains the smoke produced from automobiles, trucks, refrigeration units, industry, home gas heaters, cooking fumes from homes and restaurants, smoke from backyard barbeques, fireplaces, woodstoves, particle burners, candles, incense, outgassing from particle board, new carpeting, paints, lacquers, air fresheners, hairspray, cleaning fluids as well as dust kicked up in the wind. And what about that gas vapor we smell as we fill our gas tanks? In California alone, this totals 15,811 gallons a day or roughly the equivalence of two tanker truckfulls.

The average car driven in Santa Cruz produces 0.849 lbs of carbon emissions per average US passenger vehicle mile driven. Compared to a pack of cigarettes, this is the equivalent air pollution of 13.6 packs of cigarettes per mile. All of this exhaust goes into our atmosphere where everyone breathes it.

Yet only the smoke from individuals burning small amounts of tobacco or cannabis for personal use have been criminalized.

Consider this: The Lockheed fire burned 7,817 acres between Aug 12 - Aug 23 2009 in N. Santa Cruz County. It's origin has been shrouded in mystery but many believe that law enforcement accidentally started it by trying to burn down a remote marijuana garden. The irony of this cannot be overstated.

Mostly forested lands in the Swanton and Big Creek watershed burned. For 11 days smoke filled the county, choking residents and making everyone miserable. According to the EPA standard, (average fuel loading for woodland fires in California) the Lockheed fire generated 18 tons per acre of air pollution.

140,706 TONS of particulate matter were lofted into the sky and various dilutions of smoke drifted the northern half of the county for 11 days, affecting people out of doors and indoors as well.

Our citizenry were miserable for days by being exposed to the smoke from that ONE fire. Maybe some asthmatics died then. I don't know. But in order to produce the same amount of air pollution the Lockheed fire produced, all the tobacco smokers in the City of Santa Cruz would have to smoke for 1,025 YEARS.

And this was just the smoke from ONE fire.

No, the Santa Cruz Smoking Ban is not about protection from a 'health hazard' or because of tobacco littering. A public education campaign would take care of that. The ban is about banning people who smoke cigarettes from areas where shoppers and tourists congregate. And its about banning poor and homeless people, since police can pick and choose who they decide to issue a citation to. I'd bet dollars to donuts that more poor and homeless people have been warned and cited than tourists or shoppers.
Posted by Becky Johnson at 1:55 PM