Still way too many left out in the cold 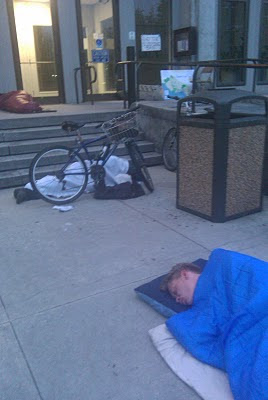 Homeless Census documents a rise in newly homeless, vehicularly housed as well as a return to former numbers

Santa Cruz, CA. -- The 2011 Homeless Census and Survey for Santa Cruz County is out. The Santa Cruz Sentinel chose to highlight "a 22 percent increase in numbers" from 2009. But since the 2009 census was done in January whereas the 2007 census was done in late March, I didn't believe there ever was a drop in the homeless population.

We see an enumeration of all conceivable shelter options available on January 25, 2011 on page 3 of the Executive summary.

So we have a total of 646 shelter spaces in use for the ENTIRE county leaving an enumerated 2,125 street count shut out of those spaces on that night. And on January 25th, we have our maximum shelter options available. But many of these shelters are only open in winter. So fewer spaces exist eight months of the year. Numerically this works out to shelter for 23% of those counted. But we know that these point-in-time counts are undercounts. Every last one.

And they state so. According to the report, "This count should be considered conservative since it is well known that even with the most thorough methodology, many homeless individuals stay in locations where they cannot be seen or counted by enumeration teams."

According to the survey of 498 individuals who self-reported that they were homeless, 22% were found to be living in vehicles. 37% were camping out somewhere. Job loss was the highest reason given for becoming homeless (125 respondents). 63% said they had a disabling condition. 28% said they had been homeless for 3 years or more indicating a continued rise in chronic homelessness.

24% of the women were victims of domestic violence. 38% said they were experiencing a substance abuse problem. 11% identified themselves as veterans. They also reported that 65% of the population is on some form of government service, with Food Stamps (42%) being the most common form of aid. However 35% reported receiving no government aid at all.

This information was gleaned from the Executive Summary. When I've read the entire report, I'll post an update.

The executive summary can be viewed online here.
Posted by Becky Johnson at 9:28 AM