Council's behind the scenes machinations typical of the 1%ers 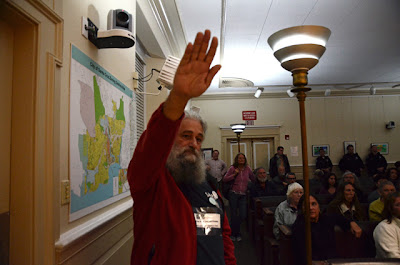 Robert Norse raises his arm in a mock, fascist salute to Mayor Ryan Coonerty for sending police to remove another man for speaking out at a City Council meeting on November 8, 2011. Photo by Alex Darocy


Santa Cruz, Ca. -- On Thursday, November 10th, City Attorney John Barisone filed an injunction against Occupy Santa Cruz in an ex parte hearing before Judge Timothy Volkmann. No one from OSC attended the closed hearing, due to the court doors being locked.

Nevermind that members of OSC had petitioned both Councilmember Don Lane and Councilmember Tony Madrigal to place an item on the City Council agenda to support Occupy Santa Cruz (or perhaps to set the parameters for OSC). Both indicated that they would consider doing this. They did not follow through, and two city council meetings passed with the only mention of OSC at the oral communications section and raised by members of the public only.

All this changed on Tuesday, November 8th, when the City Council met during its usual closed session where litigation and personnel matters are discussed. While the council is required by the Brown Act to place all items discussed on the City Council agenda, the OSC item was NOT on the agenda. However, once in the meeting, at least 5 city councilmembers voted to place an "emergency" item on the agenda: seeking an injunction against the encampment located in San Lorenzo Park. It strains credulity, that they did not have time to notice the item to deal with the 32 day old encampment.

All of this explains what happened Tuesday a few hours later during the oral communications period when most of those who spoke supported Occupation Santa Cruz. Mayor Ryan Coonerty, who has permanently shortened oral communications from three minutes to two minutes even further shortened the speech of the public to ONE MINUTE each. ("Less speech is better speech"--Ryan Coonerty March 2005)

One of these speakers was Former Mayor Celia Scott who began by questioning City investment funds for those that support enriching the 1%. She was unable to finish her statement, attempted to speak beyond the 1 minute Mayor Coonerty allowed, only to be shut down.

As soon as oral communications had ended, Vice-Mayor Don Lane began a 6 minute speech in which he first apologized to members of the public claiming that councilmembers "can't take actions on items presented in oral communications." Of course he concealed that the council had already voted to "take action" by moving to shut down the camp in court during a secret city council session earlier that day.

Robert Norse, from the audience interjected "Open the bathrooms!" indicating that Lane COULD authorize the opening of the public bathrooms in San Lorenzo Park on a 24 hour basis to serve the 200 or so campers in the park, whether the item was brought up in oral communications or not. Mayor Ryan Coonerty then warned Norse for his interjection, and when a 2nd person repeated "Open the bathrooms!" from the audience, Coonerty directed the FOUR police officers in the Council chambers to find and eject the person who had spoken in violation of their 'rules of decorum.' It was at this point, that Norse stepped forward and gave a "Nazi" salute in reaction to Coonerty's repressive use of police force to suppress speech. Few believed that if the man had shouted "Go Ryan!" the police would have been invoked.

Lane then crossed into giving his own opinions about the Occupy Santa Cruz encampment in San Lorenzo park, remarks that, according to their own process, should have been made by Lane during his ONE MINUTE of oral communications. He offered his "personal reactions" claiming "we do have a city park that is genuinely being damaged."

At this point another man shouted "Liar!" and the council reacted with great offense, head-shaking and tutting about the need for a "civil process."

For his part, City Attorney John Barisone saw another chance to bill the City for ANOTHER questionable injunction. He has filed injunctions in the past against a homeless couple for sleeping around downtown too much and against a HUFF Koffee Klatch at the Mayor's office in a lobbying effort to get the Sleeping Ban on the City Council agenda. Whether he wins or loses these injunctions, HE gets paid.

Lane reported that he 'd been at 3 General Assembly meetings and one committee meeting but "the guy never called me back." Despite these claims, Lane said he had "no idea" how to communicate with OSC, apparently not staying long enough to learn how to get on the stack. He also never learned how to get the key for the porto-potty and reported that when he had visited "it was locked."

"The park is important to the City" and that "the City has no interest in limiting your freedom of speech." He said the City issued a permit so it could "use the park in an appropriate way." He ended with "the park is not being protected at the status quo."

Then Mayor Ryan Coonerty gave his own "personal responses" by addressing the point former Mayor Celia Scott had tried to address calling for the City to examine its own financial holdings in relationship to enriching the 1%. Coonerty, in a self-serving, deflecting comment claimed that their practices were "cutting edge." Then he lectured the members of the public saying that the City "is challenged to balance all of the interests of the different park goers" when one group uses a small portion of the park for its own purposes.

"We don't issue permits to dampen your freedom of speech, we just must make sure we have full access for everyone to these public spaces."

Note that the City which claims their purpose is to "make sure we have full access for everyone to these public spaces" has criminalized BEING in the park after dark, with a dog, and if you smoke, exacting heavy fines for each offense, but allows its own city workers unfettered access to the park 24/7. They water the grass heavily so that even during the day, its not possible to set a blanket on the grass and lie down, even during droughts.

Of course the REAL issue the Mayor and City Council have with the OSC encampment in San Lorenzo Park is that homeless people have apparently, mostly peacefully joined OSC and have swelled its numbers beyond 200 people. Simultaneously, greenbelts and parks are experiencing fewer illegal campers, and OSC seems to be handling both litter removal and public hygiene despite City Manager Martine Bernal's abject refusal to open the public bathroom in the park on a 24 hour basis. Meanwhile, the positive effect on homeless campers who've joined OSC is evident.