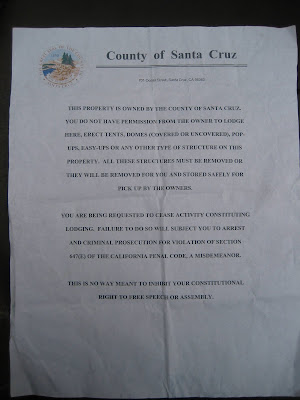 This notice was handed to me by Lt. Amy Christie of the Santa Cruz County Sheriff's Office in the predawn hours when 20 sheriff's demanded protesters at Occupy Santa Cruz remove several tents and a dome structure. Photo courtesy of Auntie Imperial November 12, 2011

What if that "activity" which "constitutes lodging" is the same activity a people use when peaceably assembled to seek redress of government grievances?

November 12, 2011
Santa Cruz, Ca. -- It is 5:40AM on a Saturday morning, and I have arrived at the Santa Cruz County Courthouse to find a Sheriff's raid in progress. Deputies are loading deflated tents into waiting sheriff's vehicles while sleepy-looking Occupy Santa Cruz protesters carry on a myriad of conversations with a dozen different deputies. Supervised and directed by Lt. Amy Christie, the sheriff's deputies were making videotapes of the area, conversing with the protesters, loading tents into police vehicles, and handing out notices.

"My tent was taken, " one thin, scared young woman told me. I could see her shivering.

"They made me drag my tent to the curb," another man told me as I surveyed a wreck of wet blankets, tarps, personal belongings, and a deflated tent all piled up in the gutter. Another woman pointed to a tent she'd placed on top of her vehicle.

" Who is in charge here?" I asked, as a Sheriff's deputy pointed to his commander.
"Lt. Christie is in charge, " he told me.

I found her and immediately began to question exactly what it was she thought she was doing there.

"Is it illegal to camp here? According to the County Camping ordinance, is it illegal? You know it's not."

"What are the elements of 'lodging' that you see here, Lt. Christie?"
" We're done. You're illegally lodging here, " she told me. "I'm going to give you this and ask you to walk away from me." She handed me a piece of paper that had the letterhead for the County of Santa Cruz on it.
"I'm not lodging here," I said. "Yeah, you are," she insisted with robot-like speech.

This was not the first raid on Occupy Santa Cruz but the first one where I was able to witness some the actions of the deputies firsthand. In the raid on November 3rd and 4th, 1 man, Felix Krull, was physically arrested and 3 people were cited. Krull was jailed for five days for not having I. D. and released without charges. On November 5th,Chris Doyon was cited by Sgt. Esther Beckman while 7 others were cited under the now-infamous PC 647 (e) on November 11th.

The section is found under the "Disorderly Conduct" section of the California Penal Code. However, the only people I witnessed "disturbing the peace" in the predawn hours were the sheriff's! No one was arrested or cited, but police did seize two tents as "unclaimed property" as protesters followed them back to the basement of the County Building with chants of "We're the 99% You're the 99%!" I'm not sure that applies to Lt. Amy Christie. SHE may be one of the 1%.
She certainly SERVES the interests of the 1%.

Looking at the new "Lodging" notice, I can see that this version is decidedly different than the last version. Not only has the County letterhead been added, but much of the language appears to specifically apply to Occupy Santa Cruz including outlawing of "domes whether covered or not". Since the doors to the courthouse on the north side of the building have been closed to the public for a decade, the area is, in no way, obstructing or interfering with any of the normal business conducted in the Courthouse or the County Building.

The first line, however is wrong. It says "This property is owned by the County of Santa Cruz." Technically, it is the citizens of Santa Cruz County which collectively "own" Santa Cruz County public property. And the Courthouse itself is owned collectively by the citizenry of the State of California, being State land. Clearly this land is not "owned" by County CEO, Susan Mauriello, however, if HER signature were on the document, along with the date and time of the warning, it MIGHT have some legal sway.

The next difference I noticed was this: "All of these structures must be removed or.... they will be removed for you and stored safely for pick up by the owners." THAT's new!

Perhaps the County Counsel has been reading up on the Kincaid Decision in Fresno where the City was forced to pay the claims of dozens of homeless people who'd had their property confiscated and destroyed by Fresno Police? Or perhaps the Sheriffs have simply become more humane and eschew destroying survival sleeping gear and tents from poor people?

There is just no way on God's Green Earth that PC 647 (e) can be Constitutional. How can a person be ARRESTED and JAILED for not having a motel receipt? It's vague, overbroad, ANND selectively enforced. The notice Amy Christie handed me this morning says "You are being requested to cease activity constituting lodging." Here we go again.

What IS "activity constituting lodging?" DA Sara Dabkowski in January of 2011 said "To 'lodge' somewhere, it's common knowledge. To lodge, live, stay the night, where they don't have permission." Yet on May 4th 2011, Judge John Gallagher told a jury that "to lodge means to settle or live in a place, that may include sleeping." Judge Rebecca Connolly also found PC 647 (e) to be Constitutional. She faced Public Defender Mark Garver who said " if "lodging" can be defined as someone who stands, sits, or publicly assembles in a protest, it can be used to disperse that protest. I am challenging this ordinance on its face as well as as applied."

So "settling in" or "living in a place" is an arrestable crime? Where have we heard that language used before?
Posted by Becky Johnson at 11:06 AM