NOTE TO READER: As one of the defendants in this case, my June 25th preliminary hearing was postponed because of Young's motion where she admitted she "misread 170.6." Now I must wait until August 20th to clear my name. My first preliminary hearing had been scheduled for March 5th, but was postponed then because Judge Ariadne Symons took 5 court hearings to appoint me a public defender. My fellow defendants and I have been dragged through the mud for months now, smeared as "trespassers" and "vandals" for our mostly peripheral connection to a non-violent peaceful occupation of a long empty bank building. That DA Bob Lee is overcharging in this case, is only one issue. With Councilmember Katherine Beiers, City Manager Martine Bernal, SENTINEL photographer, Schmuel Thayer, and Santa Cruz Patch reporter, Alex Huebner reported to have been in the building, defendants claim selective enforcement.  Finally, the prosecution of high profile alternative media journalists with serious felonies signals a creeping fascism which chills protest and freedom of speech. Does DA Bob Lee represent the cause of the citizens of Santa Cruz or does he really work for Wells Fargo, making sure empty buildings in our community remain unavailable for years at a time?   --- Becky Johnson, Ed. and defendant, santacruzeleven.org 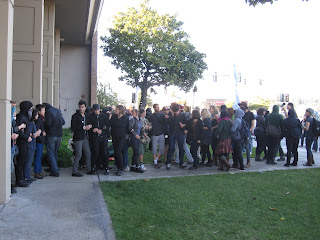 Motion to disqualify judge denied in

SANTA CRUZ - A judge has denied a prosecutor's motion for a new judge in the case of the takeover of a former Wells Fargo bank last year. Assistant District Attorney Rebekah Young had sought to disqualify Judge Paul Burdick from presiding over the cases of the five defendants whose preliminary hearings have not yet taken place. Burdick previously dismissed the charges against six of the 11 people initially charged in connection with the nearly-three-day occupation of 75 River St., a vacant former bank in downtown Santa Cruz.

Defense attorneys for Gabriella Ripleyphipps, Becky Johnson, Robert Norse, Brent Adams and Desiree Foster had objected to the motion to disqualify Burdick, calling it "untimely."
Burdick sided with the defense and will remain the presiding judge for the preliminary hearing, which is set for Aug. 20. All five face felony counts of conspiracy and vandalism, as well as misdemeanor trespassing.

Those charges were dismissed earlier this year against Bradley Allen, Alex Darocy, Edward Rector, Grant Wilson, Franklin Alcantara and Cameron Laurendeau. Young later re-filed the charges against Laurendeau and Alcantara, and their new preliminary hearing will be heard by Judge Ariadne Symons later this month.

A group declaring themselves to be "acting anonymously and autonomously but in solidarity with Occupy Santa Cruz" took over the building late last year with the announced intentions of turning it into a community center in protest of the banks' role in the national economic downfall. Amid numerous police negotiations, the group left the building peacefully after close to 72 hours.