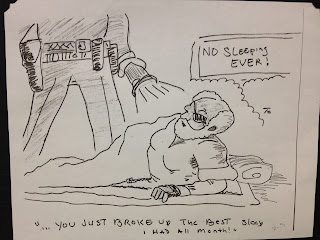 A depiction of the outrage of the Sleeping Ban as depicted by a local homeless artist.

SANTA CRUZ - A trial date of Oct. 15 was set Friday for Linda Ellen Lemaster, a community activist involved in a controversial homeless protest in 2010 on the steps of Santa Cruz County Superior Court and City Hall.

The occupation comprised a group of more than 50 people who slept and held signs on the courthouse steps. It lasted three months, before deputies began warning, ticketing and arresting protesters under a criminal misdemeanor law for unlawful lodging.


Lemaster appeared in court with friends Friday. Her attorney Jonathan Gettleman said he filed a writ of habeas corpus with the 6th District Court of Appeals in San Jose. The 53-page writ requests the court to hear and dismiss Lemaster's case, linking it to the protection of freedom of speech under the First Amendment.

"This matter is very serious as far as we're concerned," Gettleman said. "This case could really injure people's ability to engage in protests."

Gettleman said the illegal lodging law was misused to put an end to the protest and violated the constitutional right of people to assemble peacefully and to petition the government for a redress of grievances.

Gettleman said he not only hopes to clear Lemaster, but also to make the illegal lodging law unconstitutional. The federal court should decide whether to hear the case in the next few months, before the beginning of the Santa Cruz trial in October.

In a previous case related to the protest, two other activists, Ed Frey and Gary Johnson, were sentenced to six months in County Jail last October.

Posted by Becky Johnson at 1:07 PM