Six Months in jail for SLEEPING? Is this America?

URGENT!  Attorney Ed Frey and his client, Gary Johnson, both convicted under PC 647 (e),  the anti-homeless statewide anti-lodging statute for sleeping at a protest against Sleeping Bans, face a certain six months in jail apiece as Frey exhausts his appeal process. Legal, moral, and political support is badly needed. Frey and Johnson could be jailed as soon as Tuesday, July 24th, 2012 when they go before Judge John Gallagher at 8:30AM in Dept. 2 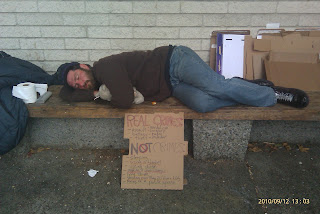 A homeless man sleeps on the benches outside of the Santa Cruz
Main Library as part of Peace Camp 2010 when protesters had
been driven away from City Hall across the street. These benches
have since been removed by public officials.  Photo by Becky Johnson

Santa Cruz, Ca. -- When Ed Frey envisioned Peace Camp 2010, he was sure of his cause. Sleeping itself is a criminal act within the City of Santa Cruz. It is illegal under MC 6.36.010 section a, to sleep anywhere out of doors or in a vehicle between 11PM and 8:30AM, with few exceptions. And while the City of Santa Cruz does pay for a sizable percentage of services offered to homeless people (some Cities provide nothing), the number of persons enumerated by each census far outnumber the number of spaces of legal shelter available. 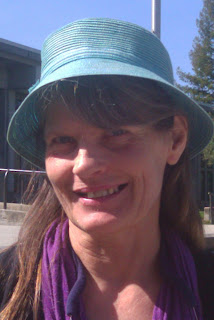 A jury trial was held for five defendants including Ed Frey who served as both the defense attorney for his fellow defendants and as his own defense. All, except Anderson were convicted. In Anderson's case, the jury hung 11 - 1 for conviction. One juror didn't think Anderson should be compelled to gas his dog in order to sleep in a shelter for one night. The remaining jurors did.

At a sentencing hearing for Gary Johnson and Ed Frey, Judge John Gallagher sentenced both men to 6 months in jail following their refusal to accept 400 hour of community service. In addition, when Johnson asked Gallagher how he could "obey all laws" since illegal lodging is illegal 24/7 and he was homeless, the Judge told him he "could sleep in jail" and ordered him jailed immediately.

When Frey asked for bail in order to file an appeal, Gallagher set bail at $50,000 apiece. Both men went to jail for several weeks. Frey was able to modify the bail to $110 each ( the bail schedule for PC 647 (e) charges) , both men were able to bail out.

Just as Johnson had warned, he was again cited four times for illegal "lodging" and jailed for another 85 days. Now both men, having exhausted their immediate appeal route due to lack of legal resources and inadequate funding, face being returned to jail to serve the remainder of their 6 month sentences.

Neither is accused of having trespassed, littered, or bothered anyone at all. Only sheriffs were disturbed to see protesters against the Sleeping Ban sleeping in direct defiance of the ban as part of a 1st amendment protected protest, and at a traditional public forum. And what was the behavior they testified to as requiring immediate arrest for disturbing the peace? Sleeping at 4:30AM. In fact, sheriff's testified they had to awaken the sleeping protesters! And six months in jail for sleeping has got to be excessive punishment.

And if an attorney and activist can be jailed for sleeping, how are homeless people treated who have limited legal shelter options?  Thanks to Ed and Gary, we now have a clue.


Those with legal resources, financial or political support, should contact ED FREY here.