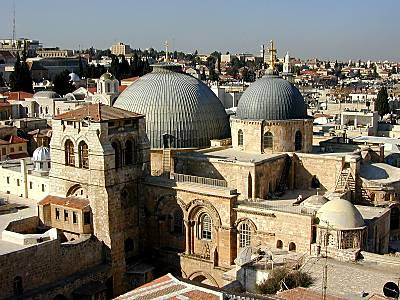 Santa Cruz, Ca. --- I was reading some of the Israel-bashing materials on the net, and found these two quotes.
I don't remember where I found them, but they are typical of the type of misinformation that is posted with extreme
regularity by those who should know better.


" Jerusalem a symbol of Palestine:"

"Today is also the Jerusalem day (May 22nd this year) that is meant to remind all people of Jerusalem being a symbol of all Palestine… Palestine that was usurped by the Jews,...."


Many people remember the story of Jacob's Ladder from the Bible. Jacob, one of the Jewish patriarchs, fell asleep with his head on a rock, fearing he would not survive the night. His fear was so great, that prior to falling asleep he had prayed to God that were he to survive the night, he would return one day and build a temple on the spot. That night, as he slept he dreamt of a ladder studded with angels ascending into heaven and to God. Jacob survived the night, and did return to build the temple. Thus was the beginning of the Holy Temple Mount in Jewish scriptures, and the founding of Jerusalem where the Mount is located.

This was 1500 B.C.E. " Palestine," the Roman occupier's name for the ancient State of Israel, didn't come into being until after the burning of the Temple to the ground in 70 C.E. and following a failed rebellion which was crushed in 135 C.E.

Islam didn't come into being until the 610 C.E.

Throughout this period (135 C.E. - 1948) despite the persecution, some Jews remained in the area of ancient Israel, continued to pray to their God, practice their religion, and to toast each Passover saying "Next year in Jerusalem!". The Jews who remained are called the Mizrayim.

So, the Jews preceeded any Muslim presence in Israel by 2110 years. The Jewish people have had a continuous presence with the land of Israel for 3, 300 years. The Jews and Israel pre-dated the name "Palestine" as well, which was neither Arabic name nor Islamic, but of Roman origin. Many Jews returned over the years so that by 1844, Jerusalem had a majority Jewish population.

The name "Palestine" was never more than the name for a geographical region, and disappeared completely under the Ottomans. The name was resurrected in modern times by leading British generals who were openly anti-Jewish. While some Britishers favored enacting the 1917 Balfour Declaration, which was adopted after decades of lobbying by Zionists in Europe, by the League of Nations, other generals wanted nothing to do with helping re-establish a Jewish State in the region.

Hence, in 1917, when the British government was awarded a large part of the Turkish Ottoman empire, which had ruled the lands of ancient Israel for the past 400 years, they named it "the British Mandate for Palestine," rather than the name more desired by the Jews, "Israel."

In 1917, Palestine was much larger than Samaria, Judea, and Gaza. 77% of the British Mandate for Palestine became TransJordan in 1921. Therefore, the remaining 23% was the area the UN resolution 181 voted to partition into a Jewish state = Israel and an Arab state = Palestine.

Islam's connection with Jerusalem is quite tenous. First, Mohammed never visited Jerusalem in his lifetime. It is not mentioned once in the Koran. Moslems pray facing Mecca, sometimes with their backs to Jerusalem.

The Al Aqsa Mosque, built on top of a Christian Church, erected on top of the Jewish Temple Mount only shows conquest, plagarism, and disrespect for the Jewish faith. The term "Al Aqsa" which in Arabic means "The Furthest Place" was named that by the Arabic conquerors attempting to cash in on Mohammed's dream where he supposedly entered heaven via horseback at "the furthest place." Despite this religious claim, Jerusalem was a poor draw for Muslim pilgrims who flocked to Mecca and Medina. But for Jews, Jerusalem and the Temple Mount are central to their faith. A faith which extends back over 3,000 years in which the Temple Mount is the home of God.

Barack Obama during his campaign for President said he supported moving the US Embassy from Tel Aviv to Jerusalem. It is well past time to do this.

Jerusalem is no "symbol of Palestine." Palestine is however a symbol of theft, deceit, conquest, and occupation.
Posted by Becky Johnson at 6:01 PM