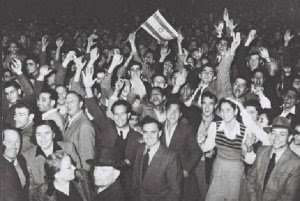 In a discussion which is found at: http://www.topix.net/forum/source/santa-cruz-sentinel/TOHL7C396IPTLQ6LU/p42

MARC WRITES: "...your assumption that Israelis are "more indigenous" or more directly related to ancient Jews than Palestinians. No objective evidence to support your assumptions exist."

BECKY: A small portion of Israel's Jews today can trace their lineage in the area back 3,300 years. These are called the Mizrayim.

MARC WRITES: "Reasonable people accept these facts and recognize that both Israelis and Palestinians have legitimate claims to the land and it will have to be shared."

BECKY: Sure. But the Jewish claim to the land is superior for the following reasons:

1. Jewish history predates Arab/Muslim history
2. Only the Jews built a nation throughout the whole span of history
3. Jewish artifacts document that long history
4. Jewish texts document that long history
5. The Jewish expulsion from Israel (in 135 C.E.)was not legal
6. Arab/Muslim "ownership" was by bloody conquest, was brief, built nothing
7. Neither the Greeks, nor the Turks, nor the Brits built a nation in Israel
8. Zionist immigration built the modern state
9. Britain's 'Balfour Declaration' became a League of Nations resolution, hence international law
10. The UN GA ratified Jews returning to Israel
11. Israel has taken its place with the membership of nations
12. Israel is the location of the Jews most holy site, the Temple Mount
13. Jewish religious text say that God gave the land of Israel to the Jewish people
14. There are 22 other Arab/Muslim countries. There is only ONE Jewish nation. there is no need to form ANOTHER Arab/Muslim nation so that Arab/Muslims can have citizenship, much less out of the TINY Jewish one.

MARC WRITES: What's the alternative?
BECKY: The answer is political and not military.
When the Palestinians accept Israel's right to exist as a Jewish State, agree to borders, agree to honor Israel's sovereignty, agree to not take up arms against Israel, there will be peace. Israel cannot make peace. Only the Palestinians can do that.
Posted by Becky Johnson at 11:41 AM