I hate to be defending a crazed-teenage-meth-head-baby-rapist-murderer but.... 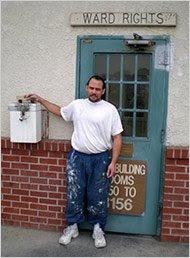 
After two hung juries, and 12 extra years beyond his sentence,
juvenile murderer set to be freed June 20, 2009

Santa Cruz, Ca. -- "You scumsucking windbag" "Sick, sick ...disgustingly ...SICK!" one of my anonymous detractors posted about me in an online forum recently when I wrote that I thought Donald Schmidt, an inmate with the State of California for the past 21 years, should be released.

Why is it when I try to talk about what ACTUALLY happened, people throw fits as if the actual facts of the case weren't relevant? Are they so bereft of any logical argument that they promote censorship of any commentary on the subject other than calling for Schmidt to be dragged out and shot? Why can't I see it differently? After all, I'm just one woman talking.

Donald Schmidt has already served 12 years beyond his sentence and has committed no new crime since he was incarcerated. And furthermore, his psychiatrists say he has been successfully rehabilitated.

As a resident of Santa Cruz County for 30 years, I remember the newspaper reports of the horrible crime in December of 1988. It was very sad when Mariah Silvola was killed. Just like everyone else, I was horrified by the crime and felt HUGE sympathy for her and her sisters. From the reports, it sounded like they were living in a hellhole.

Leslie Silvola, a single mother, lived with her 3 daughters in a cabin in California's "Dogpatch" a.k.a Lompico. Leslie and her 17-yr-old daughter were both addicted to meth-amphetamines. Leslie sold them out of her home. Although SENTINEL reports said that neighbor, Gail Levey, had made reports about neglect at that address, the County's Child Protective Services didn't get involved until Mariah was near death.

Donald Schmidt was a teenage runaway who had been physically sodomized by five different adults before the age of 16. As a result, he was filled with rage, had no skill sets, no guidance from a caring adult, and was a ticking time bomb. He met Silvola's 17-yr-old daughter who brought him to her mother's house where she lived with her two younger sisters. Most likely the mother, an adult, provided meth to Donald, a minor. Meth, for those who are unfamiliar with the drug has a "high" which makes you feel real good. It also causes hyper-sexuality. It's Viagra on speed.

A SHOCKING CRIME AGAINST A CHILD

According to the 1988 SENTINEL reports, Donald found 3 yr-old Mariah in the bathtub and locked the door. There he sodomized her. To prevent anyone from hearing her scream, he submerged her head in the bathtub. She died 2 days later. Leslie Silvola was arrested as well, and wound up serving 1 year in jail. CPS took custody of the remaining Silvola children.

Donald Schmidt was arrested, tried as a minor, and convicted of murder and rape in Judge Black's Juvenile Court. However, the rape conviction was overturned on appeal due to a mistake made by the prosecution. Schmidt was found guilt on a single charge of murder and incarcerated until age 25. Not everyone was happy that Schmidt was tried as minor. One of the most outspoken critics of that decision has been Ariadne Symons of the DA's office.

Symons, who is now a Superior Court Judge, invoked a little-used provision of state law that allows those who have served their sentence to remain incarcerated if they pose a danger to the public beyond a reasonable doubt.

As Head of Trial Operations since 1997 for the Santa Cruz County District Attorney's Office, Ms. Symons stated "It is our belief that it is imperative to community safety that Donald Schmidt remain incarcerated. Schmidt continues to attempt to prey upon vulnerable women with young children and has never accepted full responsibility for his shocking crimes".

Well, that's an exaggeration. Schmidt HAS admitted both guilt and shown remorse.
But that was not enough for Symons. She wanted him to admit he was a pedophile as well. On National Public Radio in 2005 she said "One could argue that he should, in fact, have received life in prison." "He refuses to admit the sexual interest he has with children. If you can't admit it, you can't control it. And he won't admit it." It's also telling that Symons is using Schmidt's interest in adult women (she calls it "preying")to prove he is still dangerous at the same time, claiming he is a pedophile but "just won't admit it." Pedophiles are not interested in adult women.

Schmidt, who is very charming and personable, had a girlfriend his own age for a year while in juvenile facilities in Santa Cruz County. Now in San Bernardino, he has been writing and talking on the phone with women his own age, in the hopes of forming a relationship. Most of these women already have a child or two, so Symon plays the "pedophile" card rather than admitting her evidence shows he is NOT a pedophile.

Critics say she has been grandstanding on this case in order to move her own career forward. She has ignored several inconvenient facts to do this. First, she claims that Donald Schmidt and only Donald Schmidt was to blame. Sanitized from the record is the serious abuse Schmidt suffered as a minor which explains his enraged mental state. Abuse for which he has had years of therapy in order to recover. She erases any guilt of the mother who was neglectful, an addict herself, was selling methamphetamine out of the little girl's home, and left Donald alone with her daughter. If Leslie Silvola did provide meth to Donald Schmidt that night, she certainly shares culpability. Finally Symons ignores that CPS had been alerted to problems in the home but had failed to act. Had they investigated when those complaints were filed, Mariah would probably be alive today.

Schmidt has had years of therapy to deal with his anger and to develop himself from an emotionally reactive teenager into a logically directed adult. He is no longer on meth. In fact, a panel of 7 psychiatrists at the facility in which he is held, have testified that Schmidt is rehabilitated and can be safely released. According to Chuck Blanford, his volunteer mentor for the past 10 years, Donald hasn't had a write-up since 1994.

Holding him in jail, in the absence of any new crime, is a form of double jeopardy where he is punished again and again for the same crime. For instance,in each trial Symons would make sure jurors heard every excruciating detail of the original crime. This had the effect of putting jurors in an impossible predicament: Keep this man in jail for another two years or face the possibly he might rape and murder a child again. But last I heard, we don't put people in jail for crimes they might do.

DA Wade, who has taken over for Symons now that she is on the bench, referred to a sexual drawing Schmidt made while incarcerated, and upped the ante to call him "a sexual sadist." Wade claims Schmidt has admitted to "violent sexual fantasies" and that "he doesn't know the difference between fantasy and reality." But being a sexual sadist is not a crime unless an unwilling victim is pressing charges. No one is. The DA also claims Schmidt has violated CYA rules with "drug and alcohol" use.

One juror reports that Donald Schmidt bought a prescription drug given to another inmate for hyperactivity on one occasion a few years ago. The DA called it "legal meth." He also accused Schmidt of "forced sex acts" but no additional charges for assault or attempted forcible rape have been filed.

While the DA's expert psychiatric witness testified that Schmidt remains a danger to society, his State certified panel of 7 psychiatrists say he isn't. Under American law, no juror could find against Schmidt under these circumstances because the standard is beyond a reasonable doubt. When expert witnesses disagree, that raises reasonable doubt.

Twice this year, DA Bob Lee has taken Schmidt to trial with 2 separate juries. Twice he's come back with a hung jury. Schmidt's defense attorney, William Weigel doesn't think they will ever get a jury to be unanimous on this case. So, it's entirely possible that on June 20th, Schmidt will be released in Riverside County, California. He will not be placed in Santa Cruz County and has stated he will never ever come back to Santa Cruz County.

Chuck Blanford, a long-time volunteer at the CYA facility where he is housed in San Bernardino, California said that Donald's own hellish nightmare ended the day he was arrested. For he was finally protected from those who were regularly abusing him, and he was able to sober up from the meth. The years of counseling and therapy he received helped him change from a rage-filled meth addict, to a decent human being. He also was able to receive the years of education he had been denied in his chaotic early life. I believe in atonement. I think it's rare, but I am always encouraged when it happens. Yes, Donald Schmidt should be released. But only in Santa Cruz can he be tried again and again for the same crime.
Posted by Becky Johnson at 6:20 AM