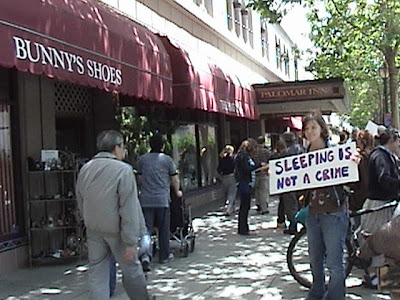 Editors Note: HUFF has been holding a protest for 2 hours each Saturday afternoon in front of Bunny's Shoes, one of four participating Pacific Ave. businesses who filed declarations for the City's Civil Public Nuisance lawsuit against a homeless couple for the "crime" of sleeping out of doors. Anna Richardson was born in Santa Cruz, but became homeless at age 14. Miguel deLeon, who goes by the nickname Lito, has been Anna's partner for the past 3 years. Both are musicians on Pacific Ave. and support themselves through tips. Neither of them are receiving payments from any government organization.

It has nothing to do with any kind of real criminal conduct or nuisance behavior like littering, trespassing, disturbing the peace, urinating, defecating, etc. Simply sleeping outside downtown has become an immediate jailing offense for these two. So far police have not arrested them.

The impact of the decision expands far beyond these two performers, since there are 1500-2000 homeless in Santa Cruz of whom less than 10% have shelter throughout the summer.

It is piling absurdity upon cruelty to ban sleeping downtown on pain of jail, yet allow no legal place for homeless people to sleep. MC 6.36.010 makes all nighttime sleeping illegal outside on public property already; the Injunction adds a jail penalty to the downtown area for this homeless couple.

Activists will continue presenting their Pledge on Human Rights and Harmony for merchants to display in their windows or in their stores in solidarity if they choose. So far about about 1/2 of the businesses downtown have been approached.

Mediators have approached Bunny's asking them to post the Pledge and support a policy of non-discrimination. Bunny's is one of four stores signing Declarations used by the City Attorney to secure the Injunction against Richardson and deLeon.

While we respect the right of Bunny's to manage its own property, when it supports police action on public property against those that have no choice, it needs to hear from the community--as does every business that supports this kind of "get-out-of-town" bigotry.