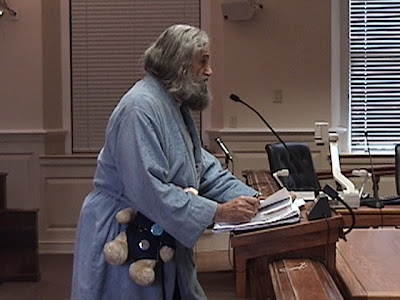 Photo of Robert Norse speaking at a City Council meeting on a different occasion dressed in his bathrobe with his Teddy Bear, which he wears in deference to homeless people who must do things out of doors, housed people would choose to do in a bathrobe.

Santa Cruz, Ca. --- What Robert Norse called "a fascist salute" and what Councilmember Tim Fitzmaurice called "a Nazi Salute" has wended its way for a second time to the 9th Circuit Court of Appeals in San Francisco, CA.

Here is the 40-minute audio statements by Attorneys for the plaintiff, David Beauvais of Berkeley, Ca. and his co-counsel, Attorney Kate Wells of Santa Cruz, Ca. City Attorney, George Kovacevich appears on behalf of the City of Santa Cruz.

The two tapes referred to are the normal City Council video that is made at each meeting. There were two of these. One for the meeting in 2002 where Mayor Christopher Krohn ejected Robert Norse for a brief, silent, hand gesture. The second meeting in 2004, Mayor Scott Kennedy ejected and arrested Robert Norse for "whispering." I was at both meetings and filmed with my own camera. The justices also saw my footage which shows that the Sgt. of Arms, Loran "Butchie" Baker saw the "Nazi Salute" directly and took no action to stop Norse's behavior nor to arrest or eject him, although he had the power to do so. The tape also shows Baker telling Norse he doesn't know what charge he is being arrested under, and he goes and talks to the City Attorney who listens and then responds and then Baker returns to Norse to tell him he is being arrested for misdemeanor "disrupting a public meeting".

"We've already spent more time on this case than we did with the Exxon Valdez." --Circuit Court Justice in her conclusions on this "Nazi Salute" case.

Robert Norse who was born Robert Kahn is Jewish.