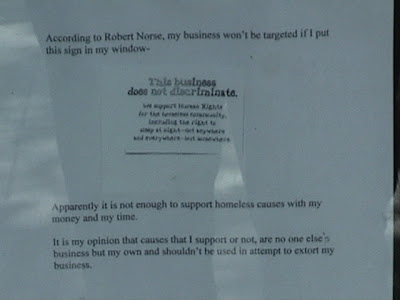 Santa Cruz, Ca. -- For five weeks, every Saturday for about two hours, HUFF and the HRO held a joint tabling event in front of Bunny's Shoes. HUFF has been protesting a declaration submitted by the owner of Bunny's Shoes against Anna Richardson and Miguel deLeon for sleeping in a back hallway near a door to her office. Bunny's Shoes shares a doorway with the Hat Company.

Early on July 4th, the owner of the Hat Company came out and spoke to Robert Norse of HUFF. She told him that while our table has been there, her business has been off 75%. Robert Norse urged her to put our small pledge in her window saying that he could then bring it up as an item on the HUFF agenda at our next meeting to discuss removing our protest from near her business. At our July 1st HUFF meeting, we voted that if the Hat Company put up our pledge in her window, that then we would move our protest table to in front of Borders Books--another business that had filed a declaration in the civil injunction against a homeless couple for sleeping around downtown too much.

During our July 4th protest, a notice was placed in the window which included in its entirety our pledge. We considered the text around it to be the owners freedom of speech and right of editorial. We also noted that nothing in the message contradicted the message in the pledge. After some discussion, we removed our table and packed up our things one hour before our initial scheduled ending. Was this a HUFF victory? I'm not sure.
Posted by Becky Johnson at 6:50 PM