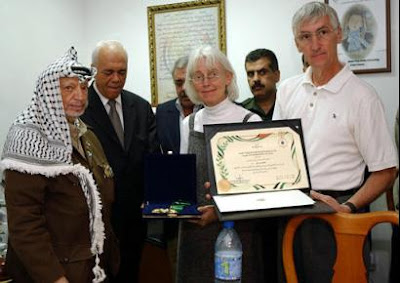 
EDITORS NOTE: The San Francisco Jewish Film Festival is planning on showing Simone Bitton's film "Rachel" and has invited Rachel Corrie's mother, Cindy Corrie to speak at the event. Since both Bitton and Corrie have over and over again demonstrated their anti-Israel and anti-Jewish bias should not be featured by a reputable Jewish film festival. Tammi Benjamin of Scholars for Peace in the Mideast, and a lecturer at UCSC has written Peter Stein, the Executive Director of the San Francisco Jewish Film Festival. Those wishing to send their own message can e-mail him at: pstein@sfjff.org The SFJFF runs from July 23rd - August 10th, 2009.

Thank you for your email. I have read it and the attached statement of the SFJFF Executive Board and Senior Staff very carefully, and I would like to bring to your attention several concerns that neither you nor the Festival leadership have adequately addressed:
1) Simone Bitton, Director of the film "Rachel," signed a petition in January of this year calling on the UN and EU to impose immediate sanctions against Israel, because "that is the only way to stop the insatiable Israeli violence." It is hardly surprising, then, that the documentary she produced is an unambiguously anti-Israel film, whose purpose is to provoke animosity towards the Jewish State and to encourage activism against it. What is surprising, and extremely troubling for many in our Jewish community including longtime Festival supporters, is that the SFJFF would be the first Jewish film festival in the country to show this film, which seeks to demonize and delegitimize the Jewish State and is, in both intent and effect, anti-Semitic.
2) Equally troubling is the fact that you have invited Rachel Corrie's mother to speak at this event. Cindy Corrie is well-known for her anti-Israel animus and her support of organizations and projects whose goal is to harm the Jewish State. For instance, if you go to the website of the Rachel Corrie Foundation (RCF), of which Cindy Corrie is president, you will see the following:
In addition,Cindy Corrie is on the Board of the Rebuilding Alliance, an organization which accuses Israel of oppressing and abusing the Palestinian people, engages in anti-Israel political lobbying and is closely allied with the International Solidarity Movement, a group which has aided and abetted Palestinian terror against Israel.
You can also hear Cindy Corrie calling for "an end to U.S. military, economic, diplomatic and corporate support for the Israeli occupation," in this YouTube video: http://www.youtube.com/watch?v=eEI2REIcpkc.
3) Jewish Voice for Peace (JVP) and American Friends Service Committee (AFSC), who are advertised on your website as co-presenters at the "Rachel" event, are well-known in the local Jewish community for being two of the most virulently anti-Israel organizations in the Bay Area:
JVP supports divestment, boycott and sanctions against Israel; engages in anti-Israel political lobbying; encourages Israeli youth to refuse to serve in the IDF; and through its official blog, Muzzlewatch, viciously attacks major Jewish organizations that combat anti-Semitism, such as the ADL, CAMERA, the American Jewish Committee, the Simon Wiesenthal Center and Stand With Us. In addition, JVP was a major sponsor of the October 2007 conference of Sabeel, a Palestinian Christian organization that embraces an anti-Zionist theology which claims that the founding ideology of the Jewish State is based on a false reading of the Bible, is unjust, and stands in opposition to God. Indeed, the pictures emailed to you by a professor at San Jose State University -- showing the JVP marching at an anti-Israel rally in San Francisco alongside groups holding banners bearing the slogans "Smash the Jewish State," "Zionism = Naziism; Naziism = Zionism" and "Jews are Terrorists" -- say it all. (See attached).
The AFSC, too, calls for and supports divestment, boycotts and sanctions against Israel (see the forwarded email below from the SF AFSC to its members and allies, calling them to a meeting next week to discuss "boycott, divestment, sanctions activities"), and the AFSC honored Ahmadinejad at a dinner when he was in NY.
Given that almost all of this information is a matter of public record, and you were presumably aware of it before planning this event, I can only assume that the Festival leadership condones the event's anti-Zionist and anti-Semitic thrust. Moreover, given your unwillingness to address the numerous concerns that many have already raised, including the fear that holding this event at a Jewish film festival will lend much legitimacy to its anti-Zionist and anti-Semitic message and be a significant source of incitement against Jews in our area, I can only assume that the Festival leadership is completely insensitive to these Jewish fears and concerns, and feels no sense of responsibility towards the community it claims to serve.
Therefore, I ask the Jewish community leaders and sponsors who are copied on this email, as well as the hundreds of Jewish community members who have been blind copied, to reconsider your support for this year's Festival.
Sincerely,
Tammi Benjamin


HERE IS THE STATEMENT FROM THE SFJFF ON WHY THEY ARE OPTING TO SHOW THE FILM "RACHEL" AT THEIR EVENT: