Sing a Song, Go to Jail? 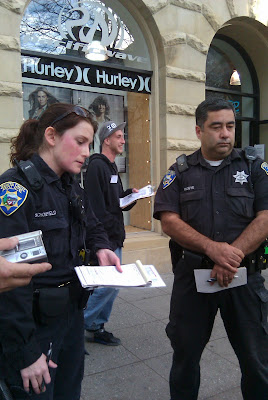 Photo: Officers Schoenfeld and Inouye interview a suspect accused of singing on Pacific Ave. January 6, 2010. The suspect was cited for "listening" to HUFF singers.


Santa Cruz, Ca. -- They say that "Let it Snow," one of the most popular Christmas songs in American history, was written by two Jews during a record heat wave in Hollywood and doesn't mention Christmas at all. Likewise when a few HUFF members decided to to sing a new song (to us, anyway)the sun was shining brightly and folks were walking along Pacific Ave. in tee-shirts. Yet in a town actually called the Leftmost City, two Santa Cruz police officers were chilling freedom of speech by issuing four $445 tickets to four people singing "Let it Snow".

SCPD Officer Schoenfeld #159 interrupted our first attempt at "Let it Snow" and told us she'd received a complaint of excessive noise.

"They're happy with you protesting, they just said you were a little loud. They were willing to sign a citation. I'd rather not do that." Since we were in one of the two "free speech" zones on Pacific Avenue, not playing amplified music which requires a permit, singing, and engaged in 1st amendment activities , and hadn't been very loud, the charge seemed odd. Of course in America, any citizen can sue anyone about anything, or so we're told.

"An elderly couple are in one of the apartments upstairs and they're trying to take a nap and they say you've been playing for about four hours. My obligation is to write a ticket if someone makes a complaint,"we were told. "I'm here to try to inform you that someone is complaining." 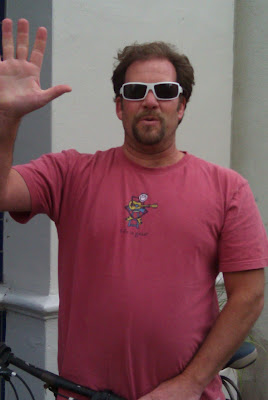 Photo: Ian, who heckled as four people were cited for "unreasonably disturbing noise" on January 6th, 2010 on Pacific Ave. in Santa Cruz, Ca. Photo by HUFF

"I couldn't even hear from across the street," said Valerie Promise, a local street singer associated with S.A.F.E. (Society for Artistic Freedom of Expression who had chanced by our event, and had joined us in singing "Let it Snow" when Officer Schoenfeld walked up. Valerie was not cited.

A somewhat lengthy discussion took place which resulted in Officer Schoenfeld revealing that she really expected us to pack up and go away based on the warning enforced by her threat of citation. We understood her warning to be about excessive noise and not our presence with the HUFF table, our petitioning effort ( 3 petitions, including one about police harassment were on the table), or our giving away a pot of hot, tasty soup to many hungry and grateful recipients. Our theme that day was "Unsafe to be Homeless in Santa Cruz" which was chosen after a record number of annual homeless deaths, 47, had been reported the previous month.

Vice-Mayor Ryan Coonerty formed a Downtown Task Force along with councilmembers Robinson and Mathews in the spring of 2007 which privately met with business owners, members of the Downtown Association, and agents from the Redevelopment Agency and the police department to teach citizens how to call police to enforce minor violations against people they didn't like. Ryan's committee completely bypassed the Downtown Commission, an indication of things to come.

Had Ryan Coonerty met with the complainant before he left the building? Did he speak to Schoenfeld before she came to "warn" us? Ryan was seen exiting Bookshop Santa Cruz less than 10 minutes before Officer Schoenfeld arrived. 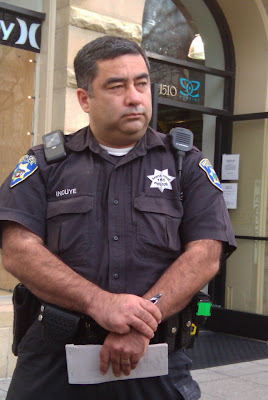 HUFF members milled while Schoenfeld, now joined by Officer Inouye , questioned witnesses, only to be confronted by a man on a bicycle named Ian who stopped to jeer at us loudly. A woman leaned out of an upper window and yelled things at us, so people started to yell back at her and a noisy dialogue ensued, far louder than any noise our tabling event had produced earlier. She openly videotaped us as well. Meanwhile the complainant, Sean Riley, came down to fill out his complaint. As I took his photo, he gave me "the finger" right in front of Officer Schoenfeld. She ignored him.

"They've been here for three hours!" Riley told Schoenfeld. This was about 3PM and didn't sync with when our first HUFF member had arrived at 1:30PM to pick up the soup or the publicized time of our event. I myself arrived at 2:30PM and only sang one and a half songs. In all, I maybe sang for about 15 minutes. We had no amplification, and other than our singing, the only other sounds we made were with Blindbear's little drum and Coral's keyboard, an instrument she has played on Pacific Ave. for five years. 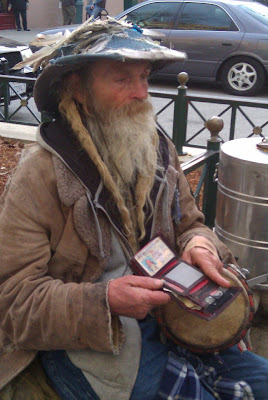 Robert "Blindbear" Facer, who was cited, did not sing a word but participated solely by keeping time on his small drum. He has been homeless on the streets of Santa Cruz for about 18 months now, and has been taken to court for sleeping out of doors twice. Now this man who sleeps in the dirt has been issued an expensive citation. He doesn't have the income to pay the $70 fee to register for the so-called "humanitarian option" of community service, much less pay the fine. And if he "doesn't take care of it" he will eventually wind up being jailed for it down the road.

"I was just making a joyful noise to the Lord," said Facer, "on the feast of the Epiphany." Facer is Amish.

Photo: Robert "Blindbear" Facer shows his identification to Officer Schoenfeld prior to being cited for "unreasonably disturbing noise Jan 5th, 2010." Photo by HUFF


After the last citation was issued, Robert Norse told Schoenfeld that he also wanted to make a citizen complaint. He wanted to cite the citizen complainant, Sean Riley, for filing a false police report---a misdemeanor. Schoenfeld suddenly did a 180. "I don't think his police report was false," she stated. Robert pressed her. "Why do you think his report is accurate when you said earlier that you didn't witness the excessive noise." "I didn't say that," she insisted. "You witnessed us singing and yet you didn't cite any of us Officer. I'm not telling you how to do your job, but if you witnessed a crime, you are somewhat obligated to either issue a warning or a citation, aren't you?

"I thought this was about excessive noise. If we played more softly would we be in violation if we didn't leave?" Norse continued. Schoenfeld finally and reluctantly admitted that "yes" that would have been legal. We asked to speak to her sergeant and were told he was "too busy" and would "call later."

I couldn't understand why Schoenfeld decided to cite us since we had stopped singing or playing any music and had not refused to stop playing or started to play again. I mean if a cop warns you to stop doing something, and you stop, is it really a warning if they give you a citation anyway?

Michelle who is a friend of Coral's, had heard us starting to sing, and came down to listen. She also lives in the same building as the complainant. We were all shocked to see that she was cited. She exclaimed her innocence and said "Robert, tell them!! I wasn't singing. " Robert told her "They don't care." He was right. They didn't.

I'm not much of a singer, but then this wasn't American Idol either. Since we had been warned about something we didn't do---violate the excessive noise ordinance---and then following the "warning" we had not continued our activity, why the citation? It was extremely chilling because now we had no idea what constitutes a violation of the law and Officer Schoenfeld was playing some kind of guessing game with us when we asked for clarity regarding what constitutes a violation of the code.

When Schoenfeld moved to cite Robert Norse, he protested. "What me?" said Robert. "I spent most of my time here talking to people who were signing petitions. I barely sang at all." "I heard you singing," replied Schoenfeld, who had suddenly decided she could determine whether our singing rose to the level of a code violation or not. Apparently for Schoenfeld, singing anything at all was sufficient cause for a citation.

Valerie Christy of HUFF had not been at our event due to her job, but had planned to play with Coral later that night. However, after the citations, both were too frightened to play. Later we heard that Schoenfeld intimidated two other musicians to stop playing music from the sidewalk in front of Borders Books, also with the threat of citation based on "citizen complaint" for "excessive noise".

"No person shall make, cause, suffer, or permit to be made any noises or sounds (a) which are unreasonably disturbing or physically annoying to people of ordinary sensitivenesss or which are so harsh or so prolonged or unnatural or unusual in thier use, time or place as to cause physical discomfort to any person, and (b) which are not necessary in connection with an activity which is otherwise lawfully conducted."

Without some objective standard, even LISTENING to a political song can be dangerous. Does this mean that when Officer Schoenfeld gets out her ticket book, every person in the vicinity had better get up and leave because this is one SCPD officer who believes in guilt by association?

This is not an isolated incident. Police have been regularly going up to street performers and telling them to stop playing and move along or they'd get a ticket 'from a citizen'--a form of pressuring which chills free speech, misreads the law, and allows a “heckler's veto” to any street singer.

HUFF members met with Mayor Mike Rotkin on January 15th. He suggested the ordinance did not apply to singers on the street unless they were screaming at the top of their lungs over a long period of time and promised to “look into” the matter.”