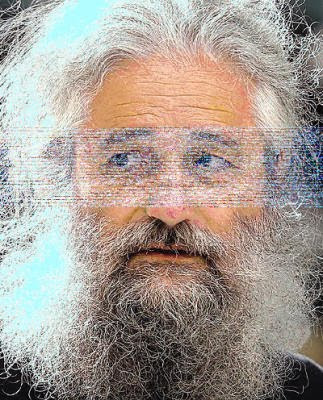 SENTINEL photo by Schmuel Thaler with the following caption "(Sleeping Ban opponent Robert Norse has been targeting Bookshop Santa Cruz in his protests)" possibly a reference to Norse's recent conviction for singing a song on a busy sidewalk near Bookshop Santa Cruz. Norse was convicted of "unreasonably disturbing noise" and was fined $250.
NOTE TO READER: As the videographer of the snippet of the City Council meeting where Robert Norse issued his "Nazi" salute, I know a thing or two about what else happened at that meeting. And unlike the statement issued by Mayor Ryan Coonerty in today's SENTINEL, Norse in no way orchestrated a disruption of the meeting. Nor can Norse be held accountable for the reactions and over-reactions of offended City Councilmembers. The City Attorney's office recently claimed they'd spent $114,000.00 defending Christopher Krohn, Tim Fitzmaurice, and Scott Kennedy from Norse's lawsuit. And that was BEFORE City Attorney George Kovacevich went to Southern California to have his hat handed to him on a platter by the en banc panel of the 9th Circuit Court. After over eight years, the court has ruled that Norse can have his day in court after all. ---Becky Johnson, Editor

SANTA CRUZ -- An 11-judge panel of the 9th U.S. Circuit Court of Appeals on Wednesday unanimously agreed a trial judge should reconsider Robert Norse's free-speech lawsuit against the city of Santa Cruz.

Norse, a longtime City Council agitator and advocate for the rights of homeless people, claims his free speech protections were violated when he was ejected from a City Council meeting in 2002 after raising a Nazi salute. Norse was arrested for disrupting the meeting and refusing to leave, although the charges were later dropped.

Norse said he abhors the Nazis' views and only used the gesture to protest then-Mayor Christopher Krohn cutting off a speaker critical of the council. The city, which has spent more than $100,000 fighting Norse, has since argued the salute was part of an organized attempt to disrupt the meeting.

After watching a five-minute clip of the salute and arrest, a federal trial judge dismissed Norse's suit in 2007, and a three-judge panel of the 9th Circuit upheld that decision. But a rare en banc panel of the appeals court agreed to rehear the case in June and reinstated Norse's suit Wednesday.

The ruling said U.S. District Court Judge Ronald Whyte in San Jose should have heard more evidence after giving Norse's lawyers just two days to prepare for a hearing that would have determined whether the case would go forward. The en banc panel's ruling indicated that city officials kicked Norse out because they disliked his views.

However, the en banc panel dismissed the arresting officer, Sgt. Loran "Butch" Baker, from the suit against city officials. The ruling said Baker followed proper procedures when Krohn complained Norse was disrupting the meeting and refused orders to leave.

The city's current mayor, Ryan Coonerty, said Norse was properly removed from the meeting not because of the Nazi salute, but because of the overall disturbance he caused.

"There is a pattern of disruptive behavior that is at issue here," Coonerty said. "And we hope the court in San Jose will recognize that we can't have a functioning democratic processes when you have somebody who is constantly disrupting the meeting."

Norse was pleased with the ruling, saying, "Any reasonable person looking at the video cannot conclude there was a disruption. There is an arrogance on behalf of the council in their determination to intimidate their critics. It's not about the Nazi salute. It's about the public's ability to engage in ordinary free speech behavior."

Norse, who lives in Felton and Santa Cruz, still frequently attends council meetings, calling for a repeal of the overnight camping ban and measures taken by the council in recent years against aggressive panhandling.

The Associated Press contributed to this report.

Posted by Becky Johnson at 1:08 PM