Victory for the 1st Amendment in Nazi Salute case 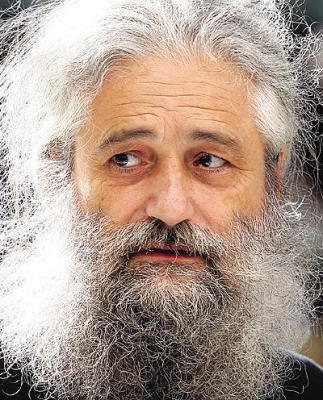 Santa Cruz, Ca. -- As a HUFF member since 1996, and an eye-witness to Robert Norse's arrest in both 2002 and 2004, I am hardly unbiased. On the other hand, I have been able to consider this case from a totality of details that neither the 9th Circuit Court of Appeals, Norse's attorneys, David Beauvais and Kate Wells, or any single witness other than Norse himself, has been privy to.

I have heard every kind of argument and smear-job made against Norse. That he is a trust-fund "baby," that he only wants to get his name in the papers, that he hurts "the homeless" more than he helps them. And that this case doesn't really advance the rights of homeless people. Etcetera, ad nauseum, and who really cares what some people think? What is the truth?

First let me share some of my personal perspective. I was with Robert Norse when he first gave a stiff-armed "salute" to then-mayor Tim Fitzmaurice prior to 2002. Fitzmaurice stopped the meeting. Denounced Norse publicly. Ordered him to leave the chambers (he complied). And announced that all future "Nazi" salutes would be disallowed.

Fitzmaurice had lost a case in 2001 against Norse, myself, and Bernard Klitzner, when he attempted to place a temporary restraining order banishing the three of us from his office when we staged a daily Koffee Klatch outside his office in a

Tim Fitzmaurice in 2005 photo by Becky Johnson
lobbying effort to put the Sleeping Ban on the City Council agenda as an item for discussion. Fitzmaurice refused. The TRO was disposed of by Judge Samuel Stevens in June of 2001, but the
order kept the three of us away from one city council meeting and from the mayor's office for 5 months, effectively side-lining us. Klitzner had a lien on his house for the cost of transcripts the Barisone's had insisted on, despite "winning" his case. Norse was forced to spend thousands of dollars out of pocket. Fortunately for me, since I was a welfare mother at the time, I was not charged for court costs. Still, it was clear that Fitzmaurice harbored a grudge against us for making him testify and for ultimately winning the case.

When Fitzmaurice ordered Norse to leave the chambers, he complied, but the incident didn't sit well with him. It was the Golden Porto-Pottie Incident all over again. In that case, Norse and I had spray-painted a bedside commode with gold paint, decorated it with ribbons, and put a sign on it: Golden Porto-Potty Award to Mayor Katherine Beiers for her 1:15AM defection from a plan to set up safe zones where homeless people could legally sleep at night, complete with dumpsters and porto-potties. Norse was prevented by the Sgt. at Arms from bringing the "award" into the meeting at all, much less, being able to present Katherine Beiers the award during oral communications. Here, he was sure his 1st amendment rights had been truncated.

Now Fitzmaurice had declared in advance which 1st amendment rights no longer existed in the City Council chambers in Santa Cruz. Norse vowed that if the same situation ever happened again, he would act differently.

Norse, HUFF, and I were attempting to get physical evidence of oppression against members of the public who were excluded from meetings or had their rights to freedom of speech trampled in some way at the meetings. It had happened to both of us previously and it had happened to other HUFF members, such as the schackled detention of James Nay, and the violent assault on David Silva by Sgt. Andy Craine. I took to bringing a videocamera to city council meetings so I could record what occurred as it happened and not be dependent on the official audio and videotaped recordings of the meeting. On March 12th, 2002 Mayor Christopher Krohn was mayor.

Norse and I had met with Krohn previously, shortly after he become mayor. We met inside the old, Jahva House coffee-shop on Union St. in December of 2001. 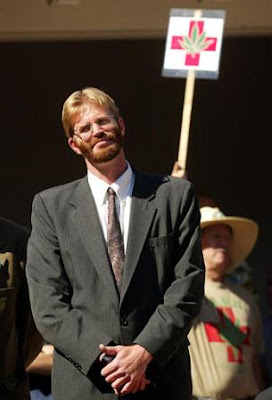 Krohn had appeared hostile to me. Demanded to know if Norse was planning on running for city council himself. We had discussed problems we were having with the oral communications period of the city council meetings. Krohn wasn't listening. We left the meeting disappointed that we had supported his candidacy in the first place.
Mayor Christopher Krohn oversees a marijuana give-away
on the steps of City Hall in September of 2002

He obviously wasn't going to carry our issues during his term as mayor.

On March 12th, Mayor Krohn announced that oral communications was about to begin. Norse had hoped to speak at oral communications but he despaired when we arrived to see a large group of people there, eager to speak about the Doug Rand Peace Park. With that many people choosing to speak, he would have little chance to speak at all, since he had spoken at the previous city council meeting. It is yet another unconstitutional "rule" at the Santa Cruz City Council that if you have spoken at the previous meeting during oral communications, you must defer to any person (even if you've waited 29 minutes and some guy walks in 1 minute before the comment period ends) who did not speak at the previous meeting. There is no logical reason for this rule. Clearly citizens who are more informed and involved will speak more often. The council can, at its wish, extend oral communications to accommodate any extra speakers, so there can be no claim that a frequent speaker will supplant a less frequent speaker. But that rule has lasted over a decade now.


Krohn asked for a show of hands. A forest of hands went up, including the hand of Susan Zeman. Then Krohn announced (much to my dismay) that he was shortening oral communications from 3 minutes to 2 minutes "so everyone will get a chance to speak." Michael Tomasi, Robert Norse, and Susan Zeman all stood in line, awaiting their turn to speak.

When Robert Norse approached the podium, Krohn ordered him to wait, claiming he'd spoken at the previous meeting. Norse returned to side of the chambers without comment. Then Michael Tomasi approached the podium, only to likewise be turned away. But Tomasi didn't appreciate at all having waited 30 minutes to speak and loudly objected. I saw the commotion and turned my videocamera on just in time to see him shouting loudly "I'll see you on the streets, pal!" as he exited the doorway. I was still filming when Susan Zeman was ordered away from the podium and threatened with expulsion.

Zeman, an anti-war activist had come to speak about the Doug Rand Peace Park. She felt that since Krohn had counted her hand just prior to oral communications, and she had NOT spoken at the previous meeting, that SHE would be the last speaker. She was dumbfounded by his treatment.

As she was forced to leave the podium, Norse lifted his left hand briefly in Krohn's direction indicating he found Krohn's behavior to be heavy-handed. He told me later he had given "a fascist salute" to show his displeasure. The rest you can see on the tape of what happened next. 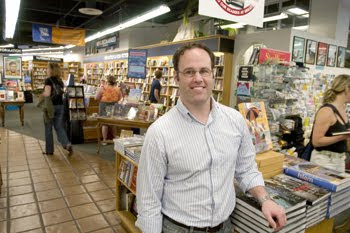 at his cashier job at Bookshop Santa Cruz

Current Mayor Ryan Coonerty was quoted in the Sentinel on December 16th, that Norse was "properly removed from the meeting" not because of the Nazi salute, but "because of the overall disturbance he caused."

"There is a pattern of disruptive behavior that is at issue here," Coonerty said. "And we hope the court in San Jose will recognize that we can't have a functioning democratic processes when you have somebody who is constantly disrupting the meeting.

Apparently Ryan Coonerty doesn't mind adding slander to the list of charges Norse can make against the City. Norse not only doesn't "constantly disrupt meetings" but, despite attending 100's of meetings, he has never been convicted for disrupting any meeting in Santa Cruz. Notwithstanding efforts by several mayors and councilmembers to paint him as "a disruptor." Norse went to City Council and repeatedly asked that the minutes of the meeting accurately reflect what had actually happened at a previous meeting. 99% of the time, the council ignored his request and allowed the minutes to reflect a very biased view of what had actually occurred.

Mayor Scott Kennedy was quoted in the Fish Wrap Live that Norse had been convicted of disrupting a city council meeting. Kennedy was forced to print a retraction.

The 9th Circuit Court of Appeals has put a chill into the spine of the Santa Cruz City Council should they dare flatten the 1st amendment rights of members of the public attending their meetings. Chief Justice, Alex Kozinski used the strongest language possible when he said "Councilmember Fitzmaurice clearly wants Norse expelled because the "Nazi salute" is "against the dignity of this body and the decorum of this body" and not because of any disruption. But unlike der Fuhrer, government officials in America occasionally must tolerate offensive or irritating speech. "

While this decision, 11 - 0, doesn't give the City much hope on appeal, it is not the end of the case. Norse has only won the right to go to court and have a trial on the facts. He may have to go back into the same courtroom of Judge Ronald Whyte and seek a fair trial from a judge who has granted two summary motions for dismissal against him already. Not an inviting scenario.