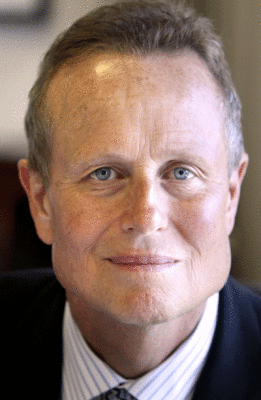 First, a little bit about how the organizers

District Attorney, Bob Lee
Photo by Schmuel Thayer March 2011
of Peace Camp 2010 last summer considered our impact on the community in general and the County Building in particular. We also considered the possible consequences of citations or arrests of the people we were attempting to shelter.

We researched the County Camping Ban and found our group would not be subject to it. We anticipated ticketing under infraction MC 6.36.010 section a a.k.a. the Sleeping Ban (a subsection of the Camping Ban). And we believed that any homeless person charged would likely be acquitted by using a defense of necessity since no one disputes there are more homeless people than the available shelter. Even a conviction would only result in 8 hours of community service (a small WIN we'd achieved back in 2000).

No one anticipated ticket and arrest under PC 647 (e). Bob Lee pulled that out of complete obscurity to use against us.

We are still researching its legislative history, but early research shows it to be based on a BLACK CODE from the late 1800's to prevent freed slaves from moving into California.

Its language prevents "illegal lodging" anywhere in the State on both public and private property without the permission of the owner. A similar law, Article 13 of Indiana's 1851 Constitution stated "No Negro or Mulatto shall come into, or settle in, the State, after the adoption of this Constitution." This term "settled in" as a crime, is the exact same language Judge John Gallagher used to define "lodging" for the jury that convicted 4 Peace Camp 2010 defendants on May 4th.

Of course we didn't NEED to tell people that they may be cited or arrested. They LIVE it every day. Local attorney, ED FREY offered to defend pro bono anyone arrested with Robert Norse, myself, and others from HUFF providing tactical support. But NONE of us are paid for this unlike DA SARAH DABKOWSKI and her 31 law enforcement witnesses. THEY are all paid HANDSOMELY!

Subpoenaed for the trial, 29 law enforcement individuals--all paid for a half day if testifying on their off-time. And PAID and in uniform, if called to testify during their regular shift.
City and County staff members, Dinah Phillips, Dannette Shoemaker --with annual salaries of $118,296 and $159,111 respectively, plus any expense for photos, videos, or other exhibits was paid for by the DA's office because their expenses are considered too vital to cut.

"Key public safety positions, including prosecutors and sheriff's deputies, will be spared layoffs...." --from the Santa Cruz Sentinel

"There are particular areas where reductions are not as great," she (Susan Mauriello) said, referring particularly to public safety services in the Sheriff's Office and District Attorney's Office."

Needless to say that DA Sarah Dabkowski is paid over $60,000/yr and the Judge is in the hundred-thousand a year club.

None of the defendants, their witnesses, their supporters, or the ONE attorney we had were paid. No wonder the trials continue unabated. The money virtually pours into District Attorney Bob Lee's office as the chance to arrest and try homeless defendants for misdemeanor lodging are unabated "make work" for law enforcement and DA's alike.