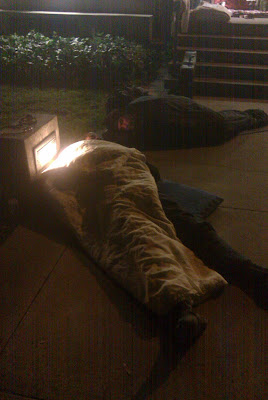 NOTE TO READER: As many readers may know, the defendants were found guilty of PC 647 (e), illegal lodging on the Courthouse steps. At the May 10th sentencing hearing, Ed Frey made a motion for a new trial based on juror misconduct at the Peace Camp Six trial. Sentencing has been postponed and a June 1st hearing on that motion is scheduled. --ed

Protesters bed down at night on the courthouse steps in Santa Cruz, Calif. to protest the Sleeping Ban. Photo by Becky Johnson July 10, 2010

The right to assemble is guaranteed in the First Amendment to the Constitution for a reason: liberty depends upon it.

This week, the Santa Cruz County Superior Court is moving forward with the trial of six people accused of illegally camping outside government buildings in the summer of 2010. Five men and one woman rolled out their sleeping bags over the summer with dozens of others who protested a city ordinance that bans sleeping outside at night in public places.

Peace Camp 2010, as it became known, began July 4 on the county courthouse steps and continued to Santa Cruz City Hall, where it ended in October. Many demonstrators were cited and arrested, but judges dismissed nearly all violations except for those of the six defendants in this week’s case.

On Tuesday, four defendants were found guilty, Anderson was dismissed because of a hung jury, and Doyon did not show up to court. He is now facing a warrant for arrest. Sentencing is expected on May 10.

The protest was intended to scrutinize the constitutionality of a policy with questionable implications. While thousands of homeless people reside in Santa Cruz County, there are only a couple hundred beds in county shelters to accommodate them.

Demonstrators argued that local governments’ insistence on presenting a wholesome image is infringing on the basic rights to life and liberty, including the very personal decision of where to sleep at night.

Because the camping ordinance criminalizes sleeping outside of a private residence, thousands of people need to “get on their feet” or “get out of town.” Unfortunately, both of these clichés are easier said than done.

Unemployment has made even the most qualified job seekers desperate for minimum wage employment. People without residences are often excluded from jobs, and while there are a few exceptions, most find the transition from street life to mainstream society painful and ultimately unsuccessful.

To top it off, state and local governments across the country actively expel the homeless with strictly enforced anti-camping policies. In more extreme cases, the homeless are bussed to other places.

Ordinances like the one in Santa Cruz exist across the country. The logic for many cities is that if sleeping outside is allowed in one town (especially a beautiful one with a mild climate), then the homeless will come flocking to sleep on the streets.

This may be true. However, the exclusion of residence-less persons from a community is both elitist and immoral. Santa Cruz should be concerned with maximizing liberty, not avoiding a population of people who sleep on the streets.

There is no point in targeting these six demonstrators, especially in light of charges being dropped against all other protesters. It is a way for the city to show that it is tough on crime. Yet, shouldn’t we be congratulating these protesters for recognizing a potentially unconstitutional policy and taking action against it?

Beyond the questionable ethics of the policy itself, there is no reasonable explanation for why these six people specifically are facing court charges.

The right to assemble is a clear and non-negotiable right in this country. It has been essential to important social movements throughout U.S. history: abolition after the Civil War, women’s suffrage after that, progressive reform in the 1930s, and most present in the recent consciousness, the civil rights movement of the 1960s.

For Santa Cruz to claim that the assembly of those six protesters was illegal because they were in sleeping bags is appalling. Peace Camp 2010 was a peaceful demonstration and, as such, it is protected under the First Amendment.

Basic rights are not contingent on a person’s residential status. Each of us has the right and the responsibility to protest unfair and discriminatory laws.

Posted by Becky Johnson at 6:08 PM