Robert Norse: City can save thousands of dollars by ending sleeping ban 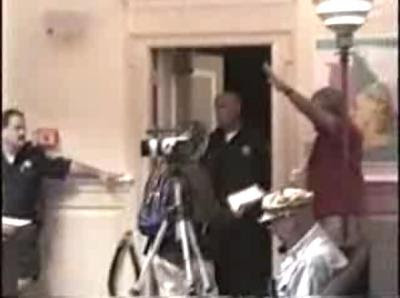 Still from video by Becky Johnson at the Santa Cruz City Council meeting on March 12, 2002

I've offered to settle a costly lawsuit. I'll drop my financial demands for tens of thousands of dollars in the "two-second mock-Nazi lawsuit" if the city of Santa Cruz will stop wasting money on ticketing homeless people for sleeping where they must at night. But Mayor Ryan Coonerty and his Council say no.

They don't mind spending scarce city money paying police to harass people for sitting down within 14 feet of a vacant building, playing a musical instrument for donation within 10 feet of a penguin sculpture or holding up a sign silently after dark asking for food. Such confrontations can and do prompt arrests and more costs.

In the last year the city spent more money on police, hosts and private "security." For what? To bust the poor for sitting on a public bench for more than an hour? For smoking a cigarette outside the library after it's closed? For holding up an "End the Sleeping Ban" sign at City Hall at 10:30 at night? Cops spent public money to take all these "crimes" to court last year.

It's illegal to be in any park after dark, including the huge Pogonip area, where hundreds of homeless sleepers hide. Sleepers without options are busted in front of churches, even those that have given their permission. "Falling asleep while poor" in liberal Santa Cruz is still a crime. Meanwhile Los Angeles, San Diego, Laguna Beach and other more conservative cities have abolished their sleeping bans.

When critics like myself come to City Hall to object to these abuses, we face hostility, discrimination, and, if we persist, the creation of special "rules" to muzzle our speech. This pattern of City Council repression against activists is the reality behind the illusion of "decorum." Maintaining this illusion and the power it masks is the real reason for all the money spent dragging out this lawsuit.

The latest is the hiring of an out-of-state law firm to prepare an appeal to the Supreme Court because, as city attorney George Kovacevitch absurdly puts it, "we have a shot, arguably, albeit a small one." I'm told that chance is 5 percent.

The lawsuit: In March 2002, as a silent protest almost as a humorous sigh, I made a brief, silent "don't act like a fascist" mock-Nazi salute and was arrested. View it here. Only Councilman Tim Fitzmaurice noticed. Then-mayor Christopher Krohn had me arrested, handcuffed and jailed with no charges ever filed. I sued for false arrest.

Nine years later in December, a rarely convened 11-member panel of the 9th Circuit Court of Appeals ordered the city to face a jury for its actions. Defending this lawsuit has already cost the city hundreds of thousands of dollars.

In response, I've offered to drop my lawsuit for personal damages if the city will agree to changes in the Council rules restoring fair public input, attorney's fees, and repeal of the camping ban as long as the current shelter emergency in the city persists there is shelter for less than 10 percent of the city's homeless.

If the Council won't listen, let's make them bite the fiscal bullet by ballot initiative.

Robert Norse is a longtime activist for the homeless and homeless issues.