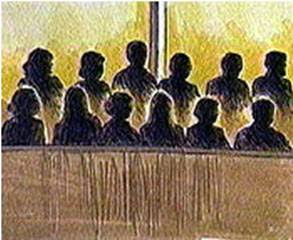 Santa Cruz, Ca. -- I have a gripe with the Santa Cruz County Superior Court. It has to do with the jury instructions given to jurors at criminal trials. The most recent example of this was at the Peace Camp Six trial before Judge John Gallagher. Gallagher told the jurors that they "must follow the law, even if you disagree with the law." Huh???? WHY do our judges do this? Why do they pre-empt the authority of the jurors to judge both the facts AND the law?

I assume they do it to get convictions. If jurors were allowed to judge the law itself....well anarchy would reign! Laws against sleeping, use of marijuana, or, as happened prior to the Civil War, slavery laws might not be enforceable if twelve citizens cannot agree in the justice of the law.

But don't take my word for it. What follows are quotes from some of our most famous jurists throughout US history. Let's see if their words bear any relevance on how juries are instructed in the Santa Cruz County court system.

"If a juror feels that the statute involved in any criminal offence is unfair, or that it infringes upon the defendant’s natural God-given unalienable or Constitutional rights, then it is his duty to affirm that the offending statute is really no law at all and that the violation of it is no crime at all, for no one is bound to obey an unjust law.

"That juror must vote Not Guilty regardless of the pressures or abuses that may be heaped on him by any or all members of the jury with whom he may in good conscience disagree. He is voting on the justice of the law according to his own conscience and convictions and not someone else’s. The law itself is on trial quite as much as the case which is to be decided."
U.S. Chief Justice Harlan F. Stone, 1941-1946.

"It is not only his Right but his Duty to find the verdict according to his own best understanding, judgment and conscience, though in direct opposition to the direction of the court." -- U.S. President John Adams, a lawyer, speaking about the Juror

"The Jury has the right to judge both the law as well as the fact in controversy."--U.S. Chief Justice John Jay

According to US Legal, Inc, "The right of jury nullification originated in what is referred to as Bushell’s Case, an English court decision from 1670. William Penn, the eventual founder of Pennsylvania, was accused of holding an illegal meeting. The jury, based on inconclusive evidence, acquitted Penn and his co-defendant Bushell. The judge retaliated against the jury by fining and imprisoning them. After several weeks, Bushell asked for an appeal of the trial judge’s action against the jurors. The judge for a higher court set the jury free and said that because reasonable people can look at the same evidence and come to a different conclusion, juries are free to decide as they see fit regardless of whether the judge believes they had an legally adequate reason."

Although this was a case in English law, the principal established applies to US law as well.

Julian Heiklend offers this description of Jury Nullification, or the ability of the jury to try both the facts and the law in this way:

"Jury nullification was introduced into America in 1735 in the trial of John Peter Zenger, Printer of The New York Weekly Journal. Zenger repeatedly attacked Governor William Cosby of New York in his journal. This was a violation of the seditious libel law, which prohibited criticism of the King or his appointed officers. The attacks became sufficient to bring Zenger to trial. He clearly was guilty of breaking the law, which held that true statements could be libelous. However Zenger's lawyer, Andrew Hamilton, addressed himself to the jury, arguing that the court's law was outmoded. Hamilton contended that falsehood was the principal thing that makes a libel. It took the jury only a few minutes to nullify the law and declare Zenger not guilty. Ever since, the truth has been a defense in libel cases."

"When a difference in sentiment takes place between the judges and jury, with regard to a point of law,...The jury must do their duty, and their whole duty; They must decide the law as well as the fact." -- Pennsylvania Supreme Court Justice James Wilson 1790

It should be noted that in 1879, the Pennsylvania Supreme Court stated that "the power of the jury to be judge of the law in criminal cases is one of the most valuable securities guaranteed by the Bill of Rights."

"The jury has the right to determine both the law and the facts. " -- Samuel Chase, U. S. Supreme Court Justice and signer of the Declaration of Independence 1796

"The jury has the power to bring a verdict in the teeth of both law and fact." --U. S. Supreme Court Justice Oliver Wendell Holmes 1902

"The jury's responsibility is to deliver justice, not to uphold the law." --- Victor Hugo from Les Miserables

"In the trial of all criminal cases, the Jury shall be the judge of Law, as well as of fact, except that the Court may pass upon the sufficiency of the evidence to sustain a conviction."--Article 23 of the Maryland Bill of Rights

The primary function of the independent juror is not, as many think, to dispense punishment to fellow citizens accused of breaking various laws, but rather to protect fellow citizens from tyrannical abuses of power by government. The Constitution guarantees you the right to trial by jury. This means that the government must bring its case before a jury of The People if government wants to deprive any person of life, liberty, or property. Jurors can say "no" to government tyranny by refusing to convict." ---from the Fully Informed Jury Association

"The judge is a witness who testifies as to what the law is, and the jury is free to accept or reject his testimony like any other." -- from the Tennessee Supreme Court in Nelson v. State 1852

So jurors have a very important job. They are to be the final check against tyranny by government. They have not only the right but the duty to judge both the facts and the law. In Santa Cruz, juries should examine whether a ban on Sleeping and a ban on using a blanket with which to keep warm are truly crimes punishable under the law. Unfortunately, they must do so against the explicit instructions of Santa Cruz County judges. However, justice demands that they do. To do anything less, is to violate the civil rights of homeless people who must sleep at night and must stay warm by using blankets or bedding.

Posted by Becky Johnson at 7:15 AM