Santa Cruz, Ca. -- Considerably regretful, Judge John Gallagher agreed to a bail reduction pending appeal for Attorney, Ed Frey, jailed directly from court last June 10th on a 6 month sentence. "As you know, I had no choice at the time," Gallagher told Peter Leeming, Ed's attorney for his motion to reconsider sentencing.

Gallagher sounded as if he was willing to do what was legally within his means to do, which wasn't much. He does not have jurisdiction to reduce his own 6 month sentence. Only an appeal can do that. He doesn't have jurisdiction to impose probation since Ed turned down the 3 years of probation offered and no counter-offer was made.

Leeming argued that there is very little case law in this area, but he did find a few cases where extraordinary circumstances existed.

"I was very moved by the circumstances in Ed's declaration," Gallagher explained. "Let's see what we can do to get him back to care for his responsibilities to his family and his clients." 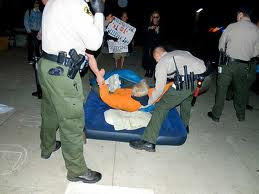 The scene was very different from June 10th, in which each side dug in, unwilling to concede any point or position. Ed declaring even after a jury conviction that he had done nothing wrong and

Ed Frey is arrested for sleeping on Aug 7, 2010 as part of a protest against the Sleeping Ban. Photo by Bradley Stuart.
was being punished "for asserting our rights."

Now, wearing green jailhouse clothes and chained at the wrists and ankles, Ed appeared calm and compliant. However, when he asked to speak, it was only to emphasize his lack of funds.

"The standard bail schedule would be acceptable," she replied. Gallagher looked this up.
"The bail schedule for 647 (e) is $110," Gallagher announced. Wasn't this bail for 647 (e) last June 10th? Gallagher had issued $50,000 bail! And Ed is neither a flight risk nor has he missed any court appearances.

And why was bail for COLLETTE CONNOLLY and ARTHUR BISHOFF set at $2500? That's 23 times what the courts have set.

Also appearing in court was GARY JOHNSON, also sentenced to 6 months in jail and not qualifying for work furlough or able to claim "extraordinary circumstances." Ed Frey, chained and shackled stood when JOHNSON stood, much to the chagrin of the bailiff.

"But I'm representing MR. JOHNSON!" Ed protested. Then he said, "Your honor, I have no idea what this hearing is about."

Gallagher called City Attorney CAIO ARELLANO to the podium and told him "I asked you to appear to tell us the status of the other infraction charges against Mr. Johnson."

Arrellano asked that they be dismissed. Gary agreed and all 21 infraction citations against Gary Johnson were dismissed. However, he remains jailed on a 6 month sentence.

Outside court, a beaming Diana, Ed's wife, collected tens and twenties offered up by Ed's supporters to raise the $110 quickly. As she prepared to drive to Watsonville to bail Ed out of the Rountree Medium Security Facility where he is housed, she expressed great relief. "It's been a long two weeks."
Posted by Becky Johnson at 12:11 PM