Ed Frey: Putting his body on the line

IN CASE YOU MISSED IT: I'm always suspicious of those who say we "want to get ourselves arrested" because I've never tried to get arrested in my life. That doesn't mean rigid adherence to petty ordinances and rules, especially so if there is no apparent victim. I seriously doubt ED ' wanted' to get arrested. But it had come to the point where civil disobedience of the law was what was called for. Indeed, when Arun Ghandi visited the Resource Center for Nonviolence years earlier, he had predicted that ONLY civil disobedience of the Sleeping Ban would change the law. And ED DID openly violate MC 6.36.010 a, of the Santa Cruz Municipal Code which outlaws sleeping at night between 11PM and 8:30AM, known as the "Sleeping Ban." Had he been found guilty of violating this ordinance, the worst punishment he would face, under law, would have been 8 hours of Community service and no jail time at all. Instead, on June 10th, ED was sentenced to 6 MONTHS in JAIL for refusing 400 hours of community service, with bail set at $50,000. Below is Curtis Cartier's interview published last August. But a few corrections are in order. Peace Camp 2010 was NOT 24/7. It was between 8PM and 8AM at the courthouse steps and at City Hall. And ED towed a porta-potty there each night and took it away during the morning. I was not convicted of "disturbing the peace (a misdemeanor)" but of "unreasonably disturbing noise(an infraction)" which you can read about HERE. Nor has Cartier even mentioned the available legal shelter in Santa Cruz serves 10% at best of those experiencing homelessness. Nor was Frey's effort in vain. --- Becky Johnson, ed

Why would a lawyer try to get himself arrested? 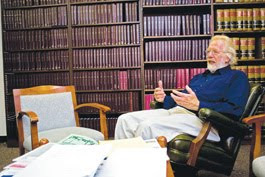 DAMN. I don't know if the cops are gonna show," says Ed Frey, looking left to right down Center Street and pulling his tattered blue sleeping bag snug. It's midnight at Peace Camp 2010 and the 70-year-old activist lawyer is on the steps of City Hall with a dozen homeless people and supporters for Day 44 of an ongoing protest against Santa Cruz's ban on camping within city limits. Perched in a fold-out chair, wearing wrinkled khaki pants and the same faded orange sweater he had on 10 days earlier when he was arrested for sleeping outside the Santa Cruz County building, Frey, who founded and organized the 24/7 protest, fits right in with his flock of rebels and malcontents.

His prospects for arrest may be disappointing, but with his finances bottoming out, he admits that avoiding jail this time may be a blessing. "I got a call today from an interested client," he says. "He really needs to be represented in court and I'd hate to have to say, 'Sorry, can't do it. I got arrested for sleeping in public and violating the camping ban. Again.'"

The fact that Frey, a bar-certified, Berkeley-educated criminal defense attorney, is at the public nexus of town in willful disobedience of the law is no surprise given his history. This is a man who brags about having sold marijuana from his law office and once nailing 18 pot plants to the front doors of the Mendocino County sheriff and district attorney. He's campaigned and lost elections for U.S. Congress and Santa Cruz County District Attorney on platforms like the abolition of all international borders and legalization of drugs. Around town, more than a few people who know him say he's crazy. Others conclude that he's just a passionate ideologue.

Santa Cruz City Attorney John Barisone, who recently squared off in court with Frey over local transient Robert Facer's camping ban citation and homeless advocate Becky Johnson's disturbing the peace violation—prevailing over Frey in both cases—goes so far as to say Frey puts his own political agenda over his client's legal needs.

"He is very argumentative, and that doesn't help him out," says Barisone. "With Facer he got in an argument with the judge, not necessarily a good tactic. He also put his client on the witness stand when he didn't need to. ... [Frey] called Facer, who basically admitted to violating the law, and I didn't even have to ask him any questions. I was able to cite his direct testimony." 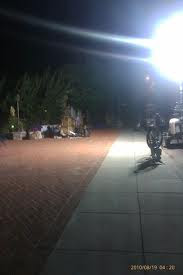 In many ways Frey is just other weirdo in a city that sells weird by the bushel. But his particular brand is both organized and influential, and for the last 52 days it's been a part of every local taxpayer's life as highly paid police conduct nightly surveillance, erect gas-powered floodlights and write tickets with the knowledge that each one will likely be dragged out in court.

None of this bothers Frey, however, as he points out that homeless rights are never very popular and that "it takes someone like me" to stand up for them. "People say I'm using people to further my agenda," he says. "But it's in the public's own good!"

Earlier in the day, Frey's phone rang with infamous homeless advocate gadfly Robert Norse on the line. Christopher Doyon, the gaunt de facto leader of the on-site activities at the protest, was quitting. Frey decided it was high time he got arrested.

"I think it has to be done," he'd said cockily. "Someone has to prove the point that it shouldn't be a crime to fall asleep. Someone needs to shake these people up."

Along with Congressman Sam Farr and Mayor Mike Rotkin, Vice-Mayor Ryan Coonerty is one of the people Frey says needs "shaking." As the sleeping ban protest was starting, he challenged Coonerty to a public debate. Coonerty says Frey was just seeking attention.

"I got a fax from him challenging me to a debate," says Coonerty. "I responded publicly that I don't think it's necessary for me to be a part of every publicity stunt in Santa Cruz. In the latest case, I think homelessness is a very serious issue and I work with social service providers and others to try and address this. I don't think that endless protesting is the right way to go about it. But he certainly has the right."

Frey, in many ways, is part of the classic fabric of Santa Cruz's old guard of radical progressives: liberal, passionate, prone to espousing conspiracy theories. His camping protest is unlikely to change the city's homeless laws and has already led to dozens of citations for a group of people with little means to pay them. With a wife of 27 years and a combined 10 children between them, his family life is strained because of his obsessive focus on homeless rights and willingness to do it free of charge. And, if he were ever actually elected to Congress, his radical policies would have little to no chance of passing.

And yet a Santa Cruz without its Ed Freys, Robert Norses and Becky Johnsons might not be the same city that residents have come to know. And Frey, at any rate, isn't going anywhere.

"My underwater yoga therapy keeps me going strong," he says. "We intend to keep on until we have the right to sleep. And I have no plans to retire. My services now seem more crucial than ever."

Read a longer version of this story online by going to www.santacruz.com and clicking on 'News.'/


Send letters to the editor here.